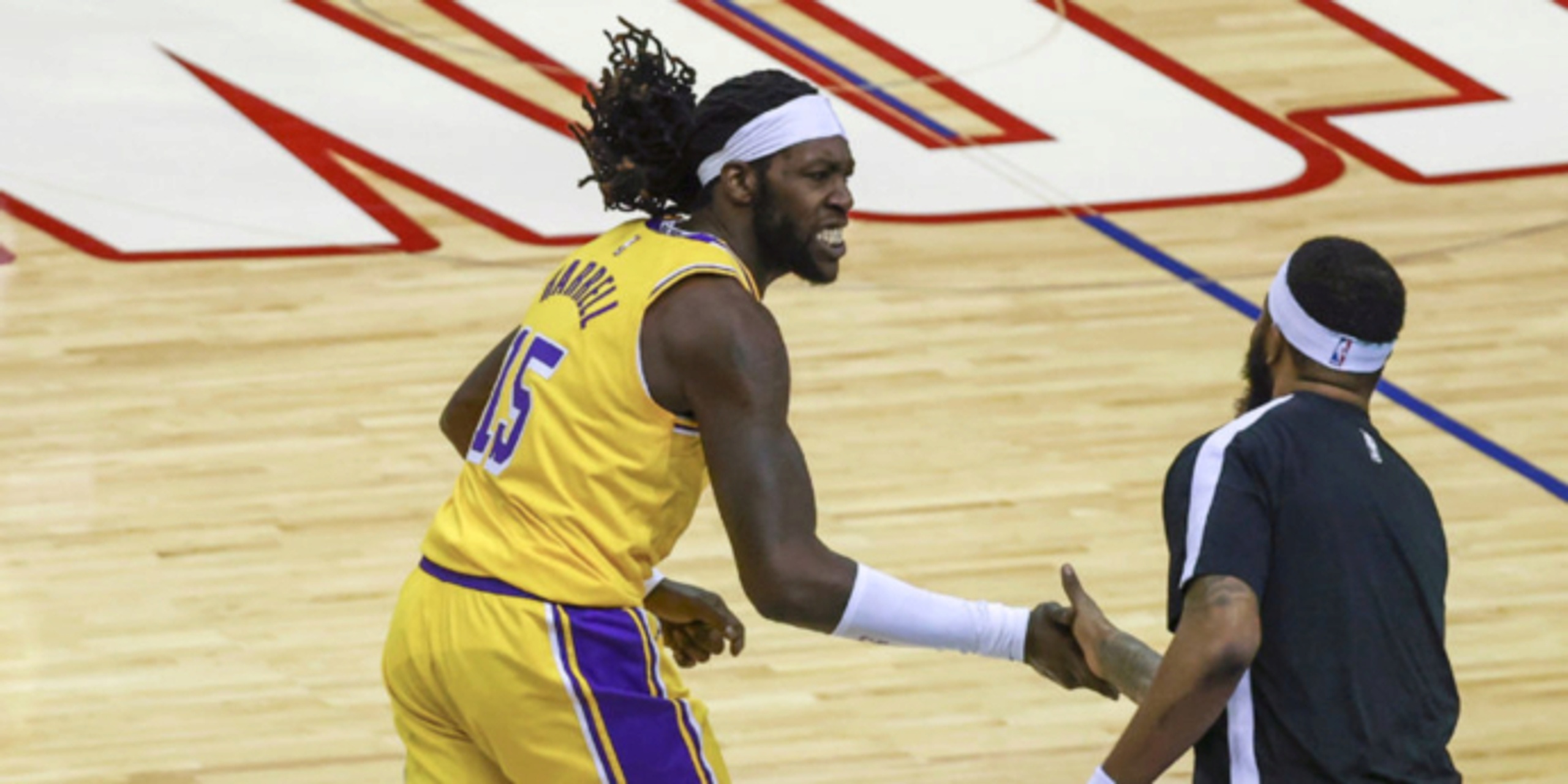 When your team’s alpha is the face of the NBA and he drops 21 fourth-quarter points en route to a come-from-behind win in his old stomping grounds against his former squad, chances are that such a performance is going to dominate the news cycle.

Not to mention that next to that alpha is a towering 6-foot-10 hybrid with big-man skills and guard tendencies, who can play either Batman or Robin on any given night.

Okay, that’s enough about LeBron James and Anthony Davis. We read about them every day. We awe over their capabilities nightly. We know just how talented the superstar duo is, and it’s primarily why the Los Angeles Lakers are champions and currently have a 10-0 record away from Staples Center.

But what about the quote-on-quote other guys? The stories within the stories, if you will. If you look around this team, there are contributions coming from everywhere.

Kentavious Caldwell-Pope is having a career start to the season, literally leading the entire NBA in both offensive and net rating (123.4/+20.8). Marc Gasol is featured in the lineups with the higher assist percentages. Alex Caruso and Talen Horton-Tucker have the top two defensive ratings on the team. Wesley Matthews is spotting up on nearly half of his possessions and confidently firing up shots beyond the arc to the respectable tune of 36 percent.

Or maybe we could bring up Montrezl Harrell’s 110.2 points percentage off paint touches, which is good for fourth in the league despite playing fewer minutes and coming off the bench, unlike most of his surrounding competition. He’s also pitching in by out-muscling his opponents on the glass, drawing and-ones on quick putbacks and using his screening prowess to help his teammates.

“I play with a lot of energy, man. I play with a lot of extra effort-type plays,” Harrell told reporters after the Lakers' win in Cleveland. “I have a list of guys I could run down on this team that can score the ball and get hot on any given night, so [I’m] just doing my job of getting those guys as open as I can; nine times out of 10, I end up reaping the reward off of it.

“But I just try to do all the little things that really don’t show up in the stat sheet -- offensive rebounds, they show up, but not many really pay too much attention to ‘em. It gives us extra possessions, it gives us multiple chances to get another shot up at the rim, which like I said, playing with these guys on this team, they don’t do too much missing on second, third tries.”

Harrell had to bring that mindset on Monday against a Cavaliers team with three bruisers in Andre Drummond, Jarrett Allen and former Laker JaVale McGee. It specifically showed when Harrell had a powerful sequence vs. McGee. When McGee posted him up on the other end and celebrated with the “too little” motion, Harrell one-upped him with a nasty dunk that ended up being a poster with McGee on the wrong end.

“I think it’s just the way both those guys compete and they play. Obviously, I’ve played with both of them -- JaVale for two years and Trez for one year -- they both just have an extreme competitive fire and competitive spirit,” Kyle Kuzma said of the moment. “The game of basketball, they like to talk, they like to rile themselves up and play ferociously. It’s great. It’s great when JaVale was here for us. It’s great when Trez does it for us here now."

Knowing who’s sharing those purple and gold colors with him, Harrell sticks to who he is.

“I don’t really look at it as anything that I have to go out and change or do anything differently. I’m really on a team with a lot of great players, man; I tell people this all the time,” Harrell said. “So [I’m] just doing the things I can do to get these guys open and getting ‘em in the right direction starting out the game. It’s just about doing that.

“Everybody has a job on our team. If you do the best you can or do your job to the best of your abilities, we’re gonna be in a great position... Me, honestly, I just look to come in and play extremely hard, man -- come in with the right energy and the right mindset and playing the game the right way. And my team usually does a great job of feeding off of it.”

Kuzma has been exemplary of what Harrell is preaching, and deserves to be spotlighted for his play this season. Before the arrival of LeBron, and especially prior to L.A. acquiring Davis, the upstart swingman had been aggressive with his shot-taking and succeeding in the process. He was closer to a focal point of the offense, depended on as a secondary (and sometimes primary) scorer.

These days, with such talent stacked up, that has drastically changed. However, while box score loyalists will look at his numbers and be taken aback, Kuzma has been a difference-maker in a whole different way. Just over the last two games in Chicago and Cleveland, he was a plus-19. And against the Cavaliers, he nabbed six crucial offensive rebounds that were monumental when the team was struggling to put points on the board.

“This year, my scoring opportunities are just very scarce. That’s just the way it is, how our team’s built, constructed where I am. I don’t want that to affect how I play and how I contribute to this team, [so I’m] just trying to make an impact to a win a game,” Kuzma said. “To me, it’s always ever been trying to win games and do whatever I can to leave my imprint on the game and just try to play hard every possession.”

Lakers head coach Frank Vogel took notice of this long before the three-year, $40 million contract extension Kuzma signed this past offseason. According to Vogel, his play this year is consistent with what he did last season.

“You saw him do this last year. You saw him sacrifice without the contract extension -- sacrificed his individual scoring numbers and find ways to impact winning in any way that he can, whether it’s defense, rebounding or running the floor, just bringing overall energy,” Vogel said. “I thought the last two games he did that exceptionally well. It didn’t show up with a high scoring total. But to think that it’s because of the comfort of the contract, I don’t think people should see it that way. I think he’s just trying to win games. He’s just trying to do whatever he can to help this team win, and that’s commendable.”

That’s what these Lakers are all about. They’re not blind to the fact that they have two MVP-caliber talents on this team, and they’re making sure that they capitalize on their own opportunities to help in any way they can to complement that.

“We’re still growing and feeling [out] one another,” Harrell said. "Every night, [not] every guy’s gonna be hot; it’s just is what it is, man. But I think if we play the right way and we do all the little things... we know who the head of our snake is out there when we’re in that group -- it’s LeBron. As much as you can, you get him as many easy shots as we can or to get him downhill in any type of action ‘cause we know it’s gonna open the floor for us, that’s what we try to do.”