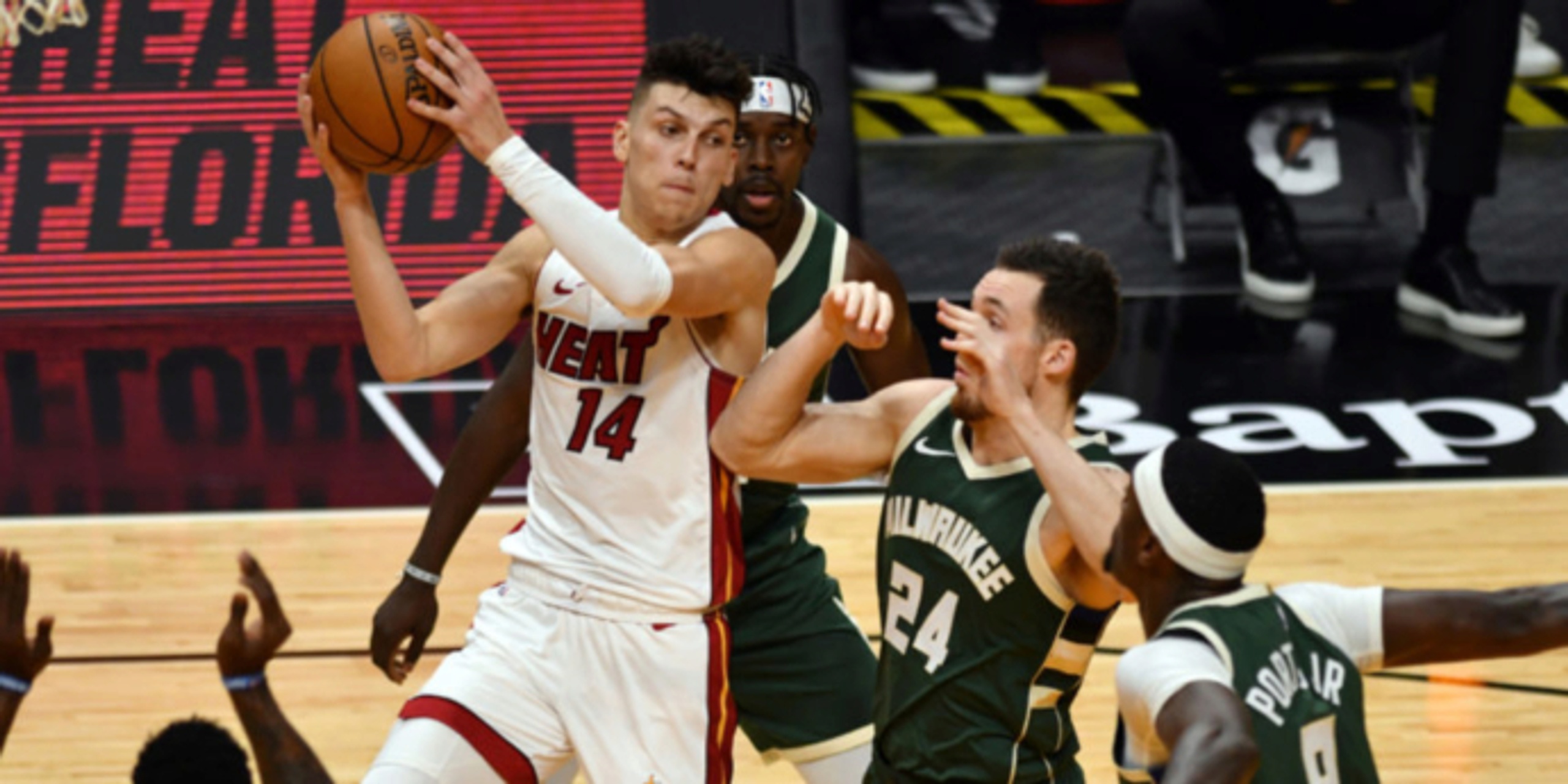 Tyler Herro isn't a point guard, but that's where he belongs for now

Herro didn’t play much point in college. In fact, his lack of primary on-ball reps at Kentucky was a big reason why the comfort he displayed in Summer League and, to a much larger extent, last season’s playoff run was a surprise to many.

He didn’t play it much last season, with less than 20 percent of his minutes coming at the 1, per Basketball-Reference. Heck, Herro himself will tell you he doesn’t want to be dubbed as a point guard. The lineups mostly disagree with that claim, though.

Herro’s playing time without a (traditional) point guard on the floor has nearly tripled in terms of rate. Per PBP Stats, Herro has played 66 minutes (16.5 per game) without Goran Dragic, Kendrick Nunn or Gabe Vincent being on the floor. That’s up from roughly six minutes per game (323 minutes in 55 games) last season if you add Justise Winslow to that list. We’re working with a four-game sample here, but that’s still a pretty stark difference.

The shift in role complements the shift in lineup distribution. According to NBA.com’s tracking data, Herro’s touches, touch time and dribbles per touch are all up from last season. If you compare his bump in usage to the third year of Devin Booker, a popular if-everything-goes-right comparison for Herro, you’ll see some similarities:

Of course, context is needed. I used Booker’s third year because that was when he really got a lion’s share of the lead ball-handler workload as the Suns’ point guard room became laughable. We all remember Eric Bledsoe’s hair salon tweet, yes? And this is a third year of sorts for Herro if we account for the pandemic layoff.

Beyond that, Herro is surrounded by more talent than Booker was, and thus is less reliant on true self creation. Case in point, per Synergy: the percentage of Herro’s possessions that have ended via a pick-and-roll (passing included) or dribble handoff have skyrocketed from 54.2 to 69.5 this season. Booker’s rate mostly stayed static (45.3 to 45.4).

Herro’s been thrown into the gauntlet with four straight games against rangy, athletic, pesky defenders. The Magic with Markelle Fultz and Michael Carter-Williams; the Pelicans with Lonzo Ball and Josh Hart (Eric Bledsoe got the Duncan Robinson assignment); the Bucks with Jrue Holiday and Donte DiVincenzo. The results have been a mixed bag, as you’d expect for a young guy thrust into a new, larger role against quality foes.

The most obvious improvement we’ve seen from Herro thus far has come in pick-and-roll situations. He projected as a player primed to win against drop coverage because of his quick trigger, shooting touch and footwork well beyond his years. Combine that with underrated passing chops and you have the makings of a pretty solid creator.

He was better in theory than in practice last season. The former Wildcat ranked in the 26th percentile as a pick-and-roll ball-handler (passes included), per Synergy. You could tell he was trying to adjust to the speed of NBA defenders, in terms of shot windows and passing windows closing quicker than they did in college.

There’s still room for improvement, but you can see the game starting to slow down for Herro. He’s generating 1.21 points per pick-and-roll possession on direct hookups, the seventh-best mark among 62 players that have initiated at least 50 pick-and-rolls this season, per a source with access to Second Spectrum tracking data. If you filter those ball screens to only include those with any of the Dragic/Nunn/Vincent triumvirate off the floor, that number drops to 1.15 points per possession.

He’s been tossing flames against drop coverage. Give him room to manipulate his man into the initial screen, and he’ll waltz into pull-up jumpers with ease.

With both Brook Lopez and Giannis Antetokounmpo stationed at the elbow, Herro has his choice of screening partners in this double-high look. He does a phenomenal job of setting Holiday up with a hang dribble before crossing back over to his left.

The growth we saw from Herro as a driver in the bubble has mostly carried over. He’s added more craft to his finishes; that threat is attracting a little more attention from enemy giants, opening the door for lay-down or wrap-around passes.

Again, you can see Herro relying on the hang-cross combo to set up his defender (DiVincenzo). He immediately snakes to the right elbow to draw out Bobby Portis, opening up a diving lane for Precious Achiuwa. With Portis and DiVincenzo committing to Herro, he’s able to flip an on-target bounce pass to Achiuwa for the layup.

Herro has struggled when faced with more ball pressure. His handle isn’t “lead ball-handler” tight. Stingy defenders can force him into early pick-ups or, at worst, sit on his pet move and poke it away.

Herro has the basic pick-and-roll reads against drop coverage down, and has downloaded the “snake” package necessary for any above-average initiator. The next steps for him are dealing with more aggression: getting the ball out early against hedges or traps, and reading the third defender -- the man who “tags” the big man on the roll, or the defender “splitting the difference” on the weak side.

Here, Zion Williamson comes with a hedge. Herro either misses or decides not to hit Meyers Leonard early, a mostly fine result even if that isn’t what the optimal process dictates. He drives past the hedge, but then misses the window for a dump-off to Achiuwa in the dunker spot, and instead gets blocked from behind by Ball.

Later in the corner, he gets another hedge from Zion. He knows the coverage by now, but still fails to release the ball in a timely manner. That’s precious time off the clock due to indecision.

The 66 minutes with Herro on the court without a point guard have been awful from a statistical standpoint. The Heat have a 94.2 offensive rating in that frame, which would easily be the worst mark in the NBA if extrapolated over an entire season. That number jumps to 107.2 when Herro and Dragic are on the floor together, revealing the obvious: Herro is much more comfortable operating against bent defenses as a secondary handler.

Herro isn’t a point guard, but that’s exactly why it’s important for him to get these reps now. Barring an apocalyptic amount of injuries, you can comfortably slate the Heat as a playoff team. Allowing a guy as important to the Heat’s long-term goals as Herro -- as a player or a trade asset -- to stretch the limits of his game is more important than a gaudy regular season net rating.

The Heat have multiple security blankets to fall back on in the event that Herro falters. But if they believe he can grow into a legitimate lead option -- they reportedly believe Herro can be better than Booker, so the safe answer is “yes” -- they need to give him the rope to do so.