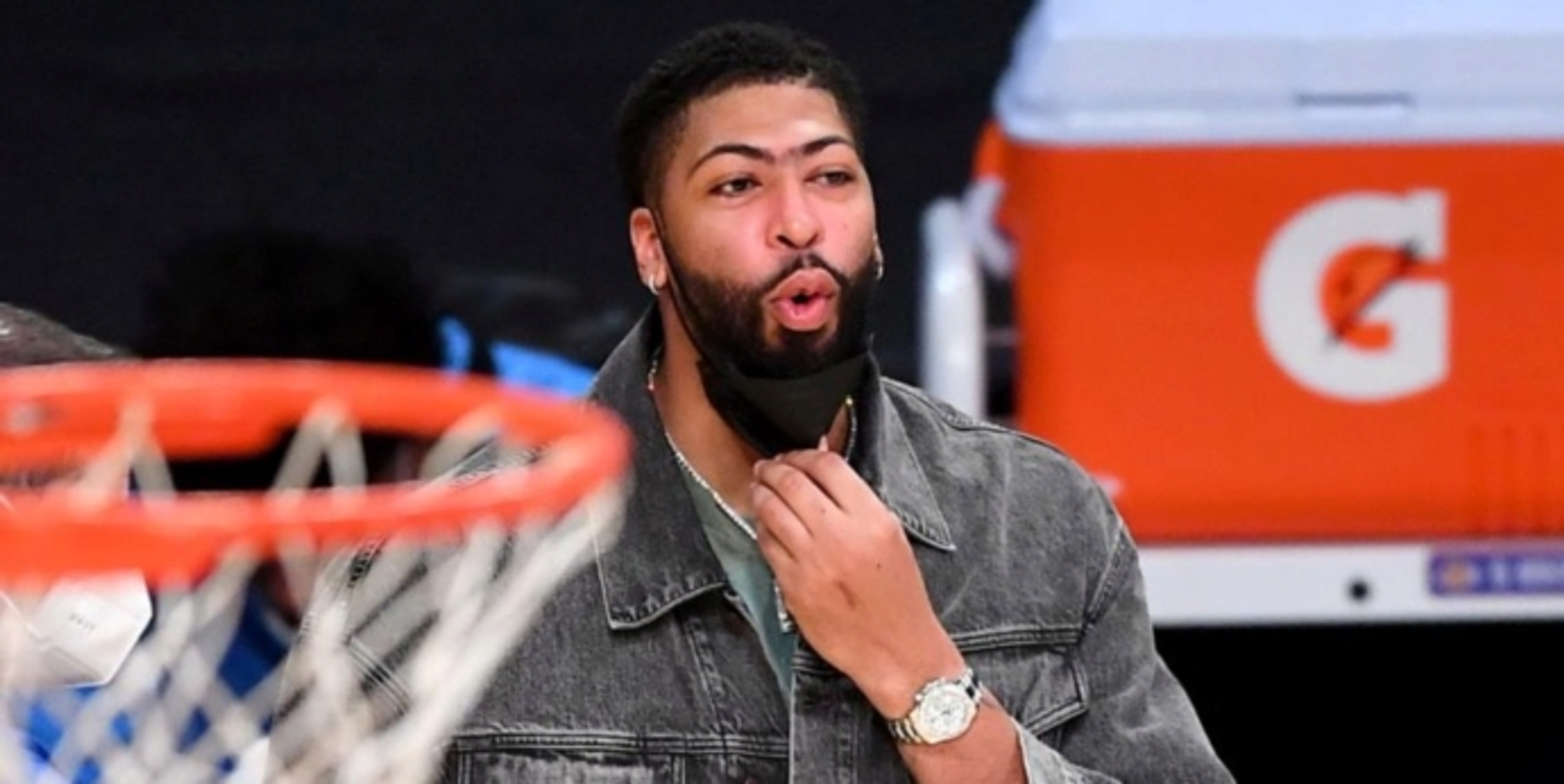 Lakers should be patient with Anthony Davis, let his Achilles fully heal

On a night when LeBron James became just the third player in NBA history to score 35,000 career points, the Los Angeles Lakers released news that could greatly alter the trajectory of their season.

On Thursday, Lakers head coach Frank Vogel told reporters that Anthony Davis will be out for at least a month as a result of his injured Achilles’ tendon and calf strain.

“We want to try to put this fully behind him and be conservative with it, just to make sure that it's fully healed before he's back," Vogel said after the Lakers’ 109-98 loss to the Brooklyn Nets, who were also without Kevin Durant.

When asked how L.A. will survive for a month without Davis, James tried to downplay the situation.

That sounds good and is definitely the mentality every player must take when one of their stars goes down for an extended period of time. They can’t act like the world is coming to an end. They have to, as LeBron said, “take it day by day” and figure out a way to keep pushing while an important piece of their collective puzzle is out of the equation.

But, on the other hand, it has to be in the back of LeBron’s mind - and, quite frankly, everyone’s mind - that if Davis is not fully healed by the time the playoffs are here, that greatly decreases their chances of repeating as champions this year.

Anybody with eyes can see that the Lakers are a different team without Davis on the floor. Without him in the lineup, their questionable decision to not re-sign Dwight Howard or retain JaVale McGee will be magnified even more. This is when their roles would’ve increased, and their production would’ve helped ease the pain of losing a player of Davis’ caliber. Howard and/or McGee would’ve provided interior defense, easy baskets inside, as they are athletic seven-footers who run the floor, catch easy lobs and block shots. They would’ve been able to stay afloat and take an even more conservative approach with Davis if they still had those two (or even if they had just kept one). But now, they don’t have those options to turn to.

At halftime of last night’s Lakers-Nets game on “Inside The NBA,” Ernie Johnson asked about the likelihood of this being an NBA Finals preview. After Shaquille O’Neal and Kenny Smith shared their thoughts, Charles Barkley asked if this was with or without Anthony Davis and proceeded to proclaim (very loudly) that the Lakers have “zero chance”  of repeating if Davis is not in the lineup due to his injured Achilles.

Now, we know that Charles is… Charles. But does he have a point on this one? Without Davis, what are the Lakers’ chances of defeating whichever team comes out of the East? Hell, would they even make it to the NBA Finals if Davis is sidelined longer than initially expected? 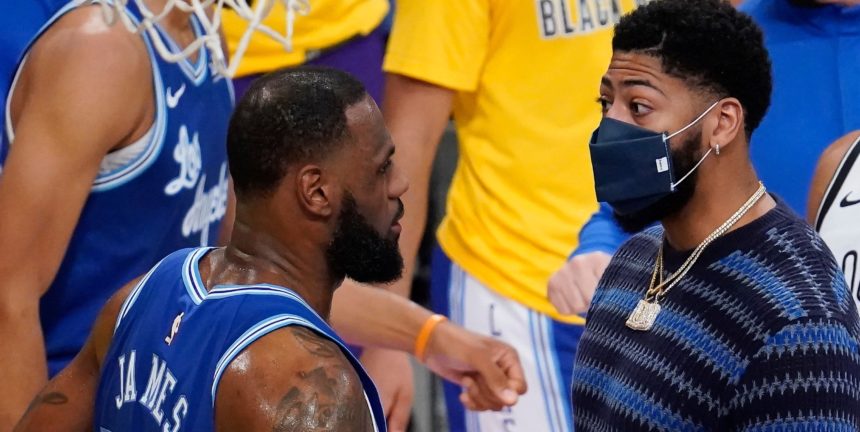 Every upper-echelon team in the Western Conference has to be licking their chops right now. The red-hot Utah Jazz look outstanding. The Los Angeles Clippers seem to be on a mission to bounce back from last year’s dismal performance in the bubble, and they were rumored to be searching for ways to upgrade their roster even before AD’s injury. The Portland Trail Blazers have been bit by the injury bug, but they’ve looked great when they were at full strength. Even the Phoenix Suns, who sit in the West’s fifth seed, are playing a great brand of basketball since the acquisition of Chris Paul (who is averaging 8.0 assists per game, which is fifth in the NBA). In addition to CP3’s playmaking and leadership, what makes Phoenix so scary is the continued stellar play of Devin Booker and their balanced attack from role players like Deandre Ayton, Mikal Bridges, Cam Johnson, Jae Crowder and Co.

Going forward, all eyes will be on Davis and this situation with his Achilles.

I asked my former Washington Wizards teammate (and former L.A. Lakers guard) Laron Profit to share his thoughts on Davis’ injury. Laron is more than qualified to weigh in on this topic being that on December 21, 2005, he suffered a season-ending ruptured Achilles’ tendon after substituting into the game for Kobe Bryant (who had just scored 62 points in three quarters against the Dallas Mavericks).

“That injury is no joke; they need to be super cautious, especially with them saying he has a calf strain,” Profit said. “The correlation between the two isn’t just random to me. Plus, with the workload he has had, his body is feeling the effects. I had a calf strain in training camp in Hawaii. I rested it. Came back, felt great. But I had tendinitis in my calf for a few weeks before the [Achilles] tear happened. I felt it really bad in the mornings - in hotels, when I would walk on the floor. I was in a game and started back-pedaling and planted my foot to push forward and boom... Yeah, it’s a huge risk for [the Lakers]; if they try and force it, their future and present could be in trouble. But they have Judy Seto on their staff [as Director of Sports Performance] and she is amazing, so he is under the watch of the best medical people.”

I agree 100% with Laron. Here’s the bottom line: It would behoove the Lakers to listen to their medical staff and be patient with Anthony Davis as he recovers from this Achilles issue. Fortunately, it sounds like that is what they are going to do, judging by Vogel’s comments.

Unfortunately, I’ve watched too many athletes try to come back too soon or play through injuries because they wanted to help their team. Look at Robert Griffin III back in the day with the Washington Football Team. He was limping around in visible pain and attempting to play because of playoff implications, only to suffer a serious injury. And, of course, the team refused to take responsibility even though they ruined his career.

Hopefully, the Lakers don’t rush Davis back. They should be ultra conservative with him as he rests and rehabs the injury, even if it means he has to sit out longer than the initial timeframe. The Lakers want to try to win back-to-back championships and Davis is one of their most important players, but mishandling this injury could have long-term consequences that negatively impact AD for the remainder of his career.