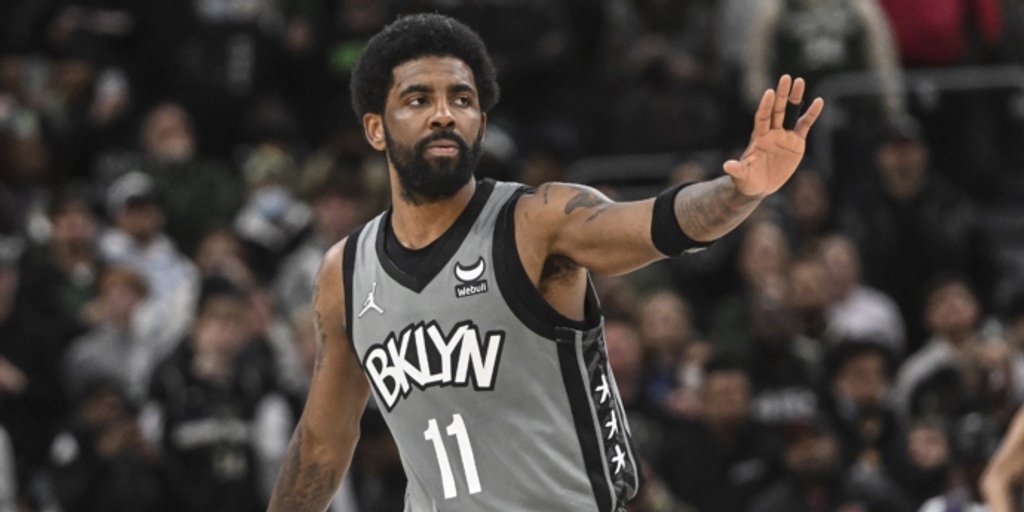 Over the past few years, nobody has been more vocal about Kyrie Irving than Stephen A. Smith.

“Kyrie Irving is saying basketball is not a priority to me…..Kyrie Irving until you want to play, you should retire," Smith said on ESPN's First Take on Jan. 13, 2021. "Forfeit every penny you make, retire and go do what you wanna do in regard to these issues that are clearly most important to you.”

“We are witnessing one of the most delusional athletes in American history," Smith doubled down on April 29. "He’s lost…What it comes down to Kyrie is you don’t want to show up to work. You wanna do what you wanna do, when you wanna do it, how you wanna do it, and then you have your hand out for somebody else’s money."

These takes — which have been repeatedly expressed by Stephen A. and those of his ilk for the past few years — have sparked a nationwide demonization of Kyrie Irving.

To debate this and the ongoing rift between the NBA players and the media, I sat down with two media giants that I have a great deal of respect for in The Athletic's David Aldridge and Marc Spears of ESPN's Andscape. We discussed the contrast between the old media and new media, what the role of the media should be and what real effects talking heads like Stephen A., Skip Bayless, Nick Wright and those of their ilk have on the entire basketball world.

Although we disagreed for the majority of the discussion, this was a healthy debate with different perspectives presented — the way discussions/debates should be.

(Editor's Note: Watch the entire exchange below on BasketballNews' YouTube channel and subscribe to Etan's podcast "The Rematch.")

Etan Thomas: I’ll agree with both of you that the majority of the media, whatever bucket you want to include everyone in, does not conduct themselves like Stephen A. Smith, or Skip Bayless or Nick Wright or those of that ilk. But they are the loudest voices. And those are the voices that you hear everyday. And those loud voices drive not only the masses of sports fans, but it also impacts the way that journalists write their articles.

Marc Spears: "Let me stop you right quick. You mentioned (Fox News) earlier — they present their misinformation as facts, whereas [Nick] Wright and [Stephen A.] Smith, they’re just speaking on sports and giving their opinion."

David Aldridge: "Etan for the sake of the discussion, I’ll accept your comparison. If the argument is these people are on TV everyday (and) therefore, they have a lot of power, therefore, their opinions carry weight. But I will come back to again: With who? (Laughing) Who do they carry all of this weight with?"

Etan: With the entire sports world.

"Kyrie just opted in for $37 million, and guess what? When he’s a free agent next year, somebody else is going to give him a big contract. Might be Brooklyn, might not be. But somebody is going to give Kyrie some more paper to play."

Etan: You don’t think the narrative that has been repeated by those like Stephen A. Smith and those of that ilk has hurt the entire image of Kyrie? Going from this past year, let’s examine why he was sitting out. During the pandemic and he didn’t want to take the vaccine. He was uncomfortable with the vaccine, which a large portion of the country was as well. I had a different conclusion than he had, but I respect his conclusion. Everybody was ok with it until... he started missing games. Then it was like, 'Wait a minute now, we can’t have this.' Then, you had Stephen A Smith saying, 'Oh he doesn’t want to play, oh he doesn’t respect the game,' and that started creating a narrative where the entire pendulum started to shift completely on Kyrie.

Aldridge: "Do you believe Etan, if I say I can agree with you on Stephen A. Smith voicing his opinion, do you think nobody on the Brooklyn Nets had the same opinion? Do you think the Brooklyn Nets were saying to themselves, 'Yeah, we would love for Kyrie to play, but we respect his position on the vaccine?'"

Etan: But nobody on the Brooklyn Nets was carrying the narrative publicly that he was abandoning his team. So once you have a Stephen A. Smith, who says that repeatedly, then you have journalists who start repeating what Stephen A Smith said in their articles. Then, you have an entire narrative that permeates throughout the entire country.

Aldridge: "Etan, I will humbly submit to you that there were a lot of people within the Brooklyn organization who had the exact same position."

Etan: I’m not talking about that, I’m saying they weren’t saying it publicly.

Aldridge: "Their focus was they needed Kyrie to win. They were trying to win championships."

Kyrie Irving is 100% correct and spot on with this and the media members who fall into this category will be quick to take offense because they know it applies directly to them https://t.co/ItgLF5N0eg

Spears: "A lot of people had the same opinion, I just think Stephen A. was just probably loudest with it."

Aldridge: "So if lots of people had the same opinion..."

Aldridge: "Okay there’s power in it; I’m saying the impact of the power I believe is far less. And look, we all love sports — we all make our living in sports, all of us love writing, talking, thinking about sports, we’re all fans of sports. But, it’s not the same... I don’t believe the power of say, the political media, the political press to shape agendas, whereas a legacy media like the New York Times has an outsized influence on the way the rest of the political press covers things, because people still read the New York Times everyday.

"That’s way different than, I would suggest, any talking head on one of the sports debate shows. Do they have influence? Yes. Do they have some ephemeral type of power and influence over a certain segment of the population? I would agree. I would again say, 'What is the impact of that power on a player?' I would say, 'Does it help shape perception of a player?' Yes it does. I would agree with you. It does help shape perception of a player."

Etan: But you don’t think the perception of a player has any impact on a GM, or a President or a team? That’s what you’re telling me?

Aldridge: "I would ask you, if you were talking about who has the worst reputation in pro basketball right now — I don’t have an answer, I’m asking you. Based on the 'media’s' shaping of their perception, who has the worst reputation right now? Kyrie? Maybe it’s Kyrie. Let’s say for the sake of the discussion it’s Kyrie Irving, because of people have killing him because of the vaccine and a lot of other things.

"Let’s just say Kyrie has the worst reputation right now in the NBA. He’s going to be a free agent next year. I defy you to tell me that he’s not going to get paid next year, regardless of this perception of him. If you’re gonna tell me that Kyrie is going to have to take the minimum next year, I would tell you that you are incorrect. Kyrie will not be playing for the minimum."

Etan: That's fair enough, but if you tell me that if he was an unrestricted free agent this year and the narrative that has been created around him wouldn’t have impacted what teams sign him for, I would have to respectfully disagree.

Aldridge: "Talent wins out Etan, you know that."

Etan: But listen, Stephen A. Smith has been drumming, 'Only sign him for a year, one year contract, don’t sign him long-term, teams beware,' etc. So you’re gonna tell me that if Kyrie was an unrestricted free agent after hearing this (hot take) constantly from people like Stephen A Smith, that teams would not be a little more hesitant to sign him for a long-term deal than they would for a year? (Which Stephen A. Smith has been repeating over and over and over again.) That’s what you’re telling me? It would have no effect whatsoever?

Aldridge: "At some point Etan, the player has to have some responsibility. Yes, it’s the vaccine this time, and I’m not questioning his motivation or reasoning, but let’s be honest: He took off games the year before. He just took games off. Now, maybe he needed to; I’m not saying he’s wrong to do it. I’m just saying in the middle of the season, he said, 'I need to take a few games off.' Okay, that’s fine, but there is impact with that Etan."

Etan: But you do understand the double-edged sword here when you have an NBA who is embracing mental health in certain aspects

Aldridge: "I’m not saying he was wrong to do it."

Etan: But this is what I’m saying: There’s a narrative that is created by the media. If the narrative created was that Kyrie was a champion for mental health, and why it’s so important to take care of your mental health to continue the longevity of your (career)... if that whole narrative was pushed that way, then the entire perception would’ve been different around the games that he took off because he said he needed a break.

Aldridge: "But it works both ways Etan. When Kyrie said that we shouldn’t go to the (Orlando) Bubble, I think a lot of people in the media applauded him for that. A lot of journalists applauded him for thinking about something other than basketball. He was saying we should use this platform that we have in the wake of George Floyd, maybe we should use that for something else other than playing games. Now, I’m not saying that everyone agreed with that, but a lot of people in 'the media' as you put it, applauded him."

Etan: But also, a lot of people in the media — and I actually wrote about this — but a lot of media talking heads called Kyrie dumb (and) said it was the stupidest thing they ever heard. And this is exactly what the players' issue is when they say 'new media/old media. It’s the specific language that is used in order to critique someone.