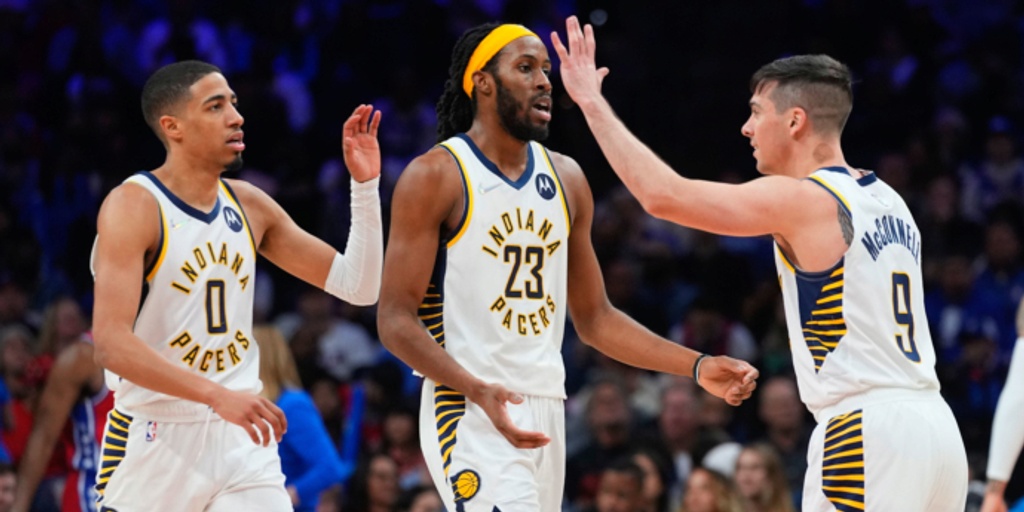 The Indiana Pacers have entered new, uncharted waters recently. Embracing a full-scale rebuild attempt for the first time in 30-plus years, the fresh energy surrounding the organization is palpable. An infusion of young talent headlined by Tyrese Haliburton and No. 6 overall pick Bennedict Mathurin suggests that a brand new vision is beginning to take shape in Indianapolis.

Stuck in neutral for a long period, the Pacers realized what had to be done and pressed the rebuild button. This decision is already showing immense promise, as they have a long-term outline that was simply nonexistent beforehand. Tearing down a veteran-heavy core that once featured Victor Oladipo, Domantas Sabonis and Malcolm Brogdon was a step-by-step process, and now, Indiana has ultimate amounts of optionality after moving on from all three veterans.

The Memphis Grizzlies' blueprint has stood out to the Pacers’ brain trust. It's a model that the organization hopes to follow, according to Pacers president of basketball operations Kevin Pritchard.

“We looked at some of the teams that have really drafted well, and now that they’re a pretty good team... You look at the Memphis’s and the teams like that that have built and now they’re going to be powerhouses for the next couple of years. So, I think what we came away from our studies [with] is there’s no quick fix," Pritchard told Basketball News in a small scrum setting on Thursday. "We can’t make a trade or two trades or three trades or use our draft picks and become what we want to become, which is great. So, how do you do it? You’ve got to pay your dues, and you’ve got to get everybody on board. And that takes multiple meetings and conviction from your head coach (Rick Carlisle), your president, your GM (Chad Buchanan) and your owner. Mr. [Herb] Simon is 100% on this. It can’t be easy.

"Nobody wants to walk in and think rebuild, and I hate that word because we have some players that we really like that we can build around. It’s going to take some time. We’re going to enjoy the heck out of it. And we’re going to build this team back up to make it a really special team, guys that have true character that want to have deep roots in this community. I think that is something we’ve talked about. How do you do that? At the end of the day, you draft well, develop relationships. [It] is your best recipe for high-level talent, high-level characters and the ability to keep players for a long time. I don’t think that’s a secret to this.”

It’s hard to avoid the "rebuild" phrase for the Pacers, but the upside is flowing into the facility with former lottery picks integrating. With one of the league’s youngest rosters heading into the season, Haliburton quickly acclimated himself and is being labeled as the new face of the franchise. (Our Alex Kennedy spoke with Haliburton about this and his hopes for the upcoming season last month.)

With Haliburton acclimating himself with a full offseason in Indianapolis, the Pacers are having fun building a roster around their point guard’s unique traits.

“It starts with Tyrese, don’t get me wrong, his ability to make plays for others,” Pritchard told Basketball News in the scrum. “I’ll say this: By having Tyrese and having players say, ‘You know, I really like playing with that,’ I think that was a big decision in Jalen [Smith] (re-signing). I think Myles [Turner] is really looking forward to playing with Tyrese. The league has changed in that the point guard position has turned into like score first, then maybe I pass. Well, Tyrese is unique; he’d rather pass. It’s like a quarterback. If you’ve got a great quarterback that’s hitting you in the chest every time, he is that.

There's plenty of internal optimism for Haliburton to take a massive jump within the Pacers’ organization. (A stat line flirting near 20 points and 10 assists wouldn’t come as any sort of a surprise in Indiana.) Outside of Haliburton and the aforementioned rookie in Mathurin, their highest draft pick selected since 1988, many new-core players are taking notable steps forward in their development.

Chris Duarte, who was sidelined to end his rookie campaign with a nagging toe injury, is mentally processing the game at a different speed. Isaiah Jackson, who Pritchard said has gained 15 to 18 pounds, is poised for a massive breakout as well. Smith, who re-signed with Indiana, continues to flash his former top-10 pick upside following his exit from the Phoenix Suns.

A gym full of athletes and prospects looking to improve provides a breath of fresh air compared to the all-too-familiar unknown of whether or not the team would make it past the first round of the playoffs.

“We are giddy,” Pritchard told Basketball News of their young core they’re building together. “It’s interesting, when watching (scrimmages) and you throw them out there and let them play, what you find out is Tyrese, TJ McConnell, [Andrew] Nembhard are really fast players, and everyone kinda fills in. There have been times where I have been in awe about how fast our team is, which, that’s young legs right? That’s young, exciting legs. We’ve seen more plays at the rim where it’s a blocked dunk, sprint down, dunk on someone. We’ve had more alley-oops — I think Chad Buchanan was joking with me the other day about three or four years ago we had two lob dunks in the whole year. We had 10 [on Thursday].

"The league is getting more athletic. A couple years ago we decided, 'We’re going to look at this draft and trades, and let’s get some of these athletes because they’re fun to watch.' Balancing that... Coach Carlisle loves shooting. So, if you can find a great athlete that is a great shooter, I’m all-in.”

Not only are the Pacers all-in on their new long-term vision, one where patience is the most important part, but they’re also in a new position as an organization — optimizing future flexibility via multiple avenues. Indiana still has oodles of cap space ($29.6 million per Cleaning The Glass), which allows for new opportunities to fall into their lap. The Pacers are open about their desire to continue bringing in more assets, either young players or future draft picks, to accelerate their plan.

“That’s what we’ve gotta do right now. We’ve gotta capitalize on cap space, on picks,” Pritchard said. “In any way we can, we got to be gritty as a staff, if can we acquire more of those to have a chance to be part of our big core. And we’re developing the core. People ask me all the time, do you have that core? Maybe, maybe not, but we’re getting closer and next year we’ll be closer.

"That’s the fun part of our business is being creative and generating ideas. Look, we have three first-round picks it looks like next year. We have close to $30 million in cap space. And we’ll be active to use that cap space to acquire more assets. That’s just natural, but I think it gives us the ability to pivot in a lot of different ways. We have optionality out the butt. At the end of the day, I want to be able to sit in the room with Herb and management and coach and say, 'Alright, here’s our possibilities. Where do we want to go?’ In the past it’s been, 'We’ve got to go down this path. This is the path we’ve got to go down. It’s only going to get us so far, we know there’s only so far, we’ve got a freaking ceiling.' What I want to do is remove a ceiling and that takes time. It’s going to take time.”

Outside of that excitement for the new-look youth taking over the roster, an uncertain future remains for veteran mainstay Myles Turner. A subject of trade rumors for the last few years, which picked up immense steam once the Pacers hit the reset button, Turner saw the organization openly flirt with replacing him by chasing Deandre Ayton in restricted free agency.

Entering a contract year, Turner’s future feels murkier than ever in Indianapolis. And with the way the subject was broached on Thursday, it wouldn’t be a stunner to see Turner play in another uniform before February’s trade deadline passes. Pritchard admitted his recent conversation with Turner was one filled with emotions, and the ever-changing nature of the business leaves the door open for anything to happen there.

“I sat down and talked with Myles for an hour, hour-and-a-half the other day. It was a heart-to-heart,” Pritchard said. “I don’t want to tell you exactly what was said, but I’ll give you the crux, and that is I think he’s super excited about playing with Tyrese. I think he wants to play the 5 exclusively. I think he wants to be a defensive monster. And I think that he’s okay planting deep roots here. But, you know, he’s going to be a free agent next year. There’s a lot of things that can happen. What we think today isn’t something that we know is going to happen tomorrow. This is the most dynamic business in the world.”

Turner is eligible for a contract extension, but Pritchard didn’t want to publicly say whether or not that route remains on the table with their starting center.

“Respectfully, I’d like to keep that between me and him,” Pritchard said.

Based on the Pacers’ turn into a fresh era, one where internal development takes priority over the win-loss column in the meantime, veterans like Turner and Buddy Hield will be names to watch from a leaguewide lens throughout the season from a potential trade market perspective. Nowadays, optionality, flexibility and patience will be the key buzzwords heard out of Indiana. And it’s for the best with how its roster was running into a brick wall over and over again before the light finally turned on to rebuild from the ground up.

With the Pacers armed with draft capital and cap space, on top of a roster filled to the brim with potential — including their tantalizing backcourt combination of Haliburton and Mathurin — the vision is as clear as day. It’s a new era in Indiana, and a route that everyone internally acknowledges should have been explored even earlier. If all goes to plan for the Pacers, these tough times could soon turn into a sustained success that hasn’t been witnessed for the organization since nearly a decade ago.

“We were an aircraft carrier and it was really hard to turn. And right now, we’re a little speedboat and we’ve got all of these ways to maneuver,” Pritchard said. "That’s exciting. That’s really exciting for us, because it’s hard to turn the big boats. For better, we’re all-in.”