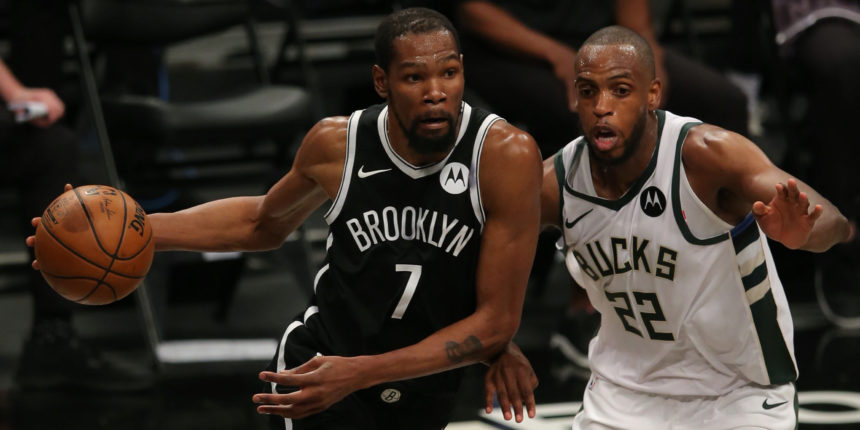 Today, NBA.com released its annual general-manager survey, and the results make it clear that many front offices around the NBA are scared of the 2021-22 Brooklyn Nets.

When asked who would win the 2022 NBA Finals, 72% of GMs predicted that the Nets will win it all (while 17% voted for the Los Angeles Lakers and 10% picked the Milwaukee Bucks). Also, 83% of executives believe that Brooklyn will win the Eastern Conference.

The Nets also had two players listed in the section asking the question, "Which player forces opposing coaches to make the most adjustments?" Stephen Curry was first with 27% of votes, followed by Durant (20%), LeBron James (17%), Harden (13%) and Antetokounmpo (10%).

Also, Durant was selected as the top player that NBA GMs would want taking a shot with the game on the line, receiving 41% of votes. Stephen Curry (24%) and Damian Lillard (17%) rounded out the top three, while Kyrie Irving finished sixth with 3% of votes.

Rival GMs were also impressed with Brooklyn's summer, as the Nets received the third-most votes in the section regarding which team "made the best overall moves this offseason," trailing only the Miami Heat's 47% and L.A. Lakers' 17%. Patty Mills to Brooklyn was voted the second-most underrated player acquisiton (receiving 17% of votes) behind only Larry Nance Jr. to the Portland Trail Blazers (28%).

It's no surprise that rival GMs are so high on Brooklyn and Durant. Last year, the Nets finished 48-24 despite injuries, the midseason addition of Harden and limited chemistry. Had they not been shorthanded in the playoffs, who knows how much further they could've advanced? Now, with a full offseason to get everyone healthy and on the same page — plus an improved supporting cast — Brooklyn is the team to beat entering this season.

As for Durant, the last time we saw him in an NBA game, he delivered a remarkable 48-point, 9-rebound, 6-assist, 4-three, 1-block, 1-steal performance in Game 7 of the Eastern Conference semifinals against the Bucks. While he couldn't lead the short-handed Nets to the overtime victory, KD wowed the entire basketball world.