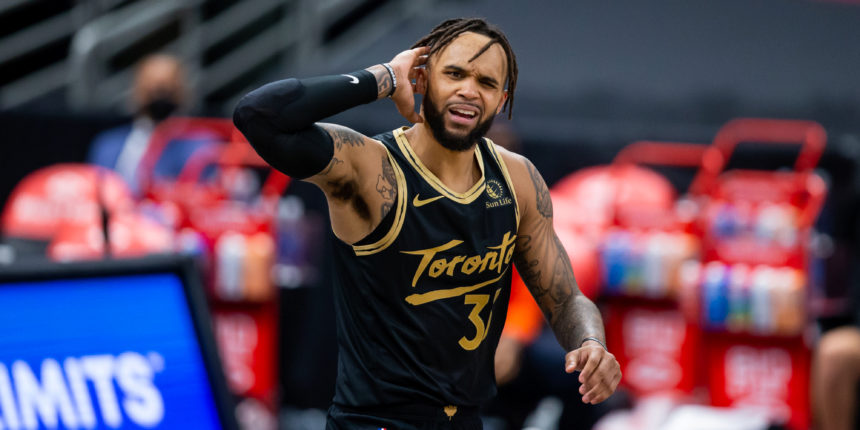 In short order, Gary Trent Jr. has given Raptors hope for the future

Gary Trent Jr. may not have set foot in Canada just yet, but with the Toronto Raptors, he’s already appeared to find a home.

Stationed in Tampa, Fla. through at least the conclusion of the 2020-21 NBA season, Trent hasn’t yet made the fateful trod up North, but meaning in purpose has been found; the young guard has a sense of belonging with the 2019 NBA champs.

In a season marked by physical displacement and isolation and injuries galore, the Raptors enter play on April 11 with only a puncher’s chance of securing a play-in opportunity for the Eastern Conference’s eighth seed. Across the board, the team merely aspiring to such a fate is one of the league’s biggest surprises.

Fortunately for Nick Nurse’s club, so was Trent’s eye-opening performance in the team’s Saturday-night road win over the Cleveland Cavaliers. The young guard continued his strong play since the March 25 trade by helping the shorthanded Raptors secure a 135-115 victory over the Cleveland Cavaliers with a 44-point effort that saw him shoot 17-for-19 from the field, including 7-for-9 from three-point territory.

The win improved the Raptors’ 2020-21 record to 21-32. That’s hardly worth writing home to Ontario, but we’ve now officially begun to wonder just how good Trent can be when given the opportunity. And privately, president Masai Ujiri is probably wondering just how big of a check he’ll have to write this summer to retain the 22-year-old.

Including Saturday night’s performance, in nine games since the trade, Trent has given Nurse’s team 17.9 points on about 42% shooting from distance. The numbers are comparable to those of the departed Norman Powell, however, five years his junior, Toronto can at least wonder whether Trent can be developed along the lines of Fred VanVleet and Pascal Siakam.

As a rookie, Trent played just 7.4 minutes per game – barely enough to prove his worth. Last season, in 21.8 minutes per contest, he proved to be a credible two-way player, but he’d been splitting time with veteran players in Portland and, it seems, wasn’t given the freedom and opportunity to show what he was capable of. At least that’s what can be taken from his outspokenness, with which he’s commented about feeling “wanted” in Toronto.

In the NBA, the story of a young player being “held back” by a lack of opportunity or a coaching staff that didn’t “believe” in him is as old as time. Once upon a time, though, this was true of James Harden, and coincidentally, C.J. McCollum.

Now, on a rebuilding team that doesn’t have the pressure of contending for a championship (at least not his season), Trent has appeared to find himself in an ideal situation. It’s also timely considering the fact that he will have an opportunity to cash in this summer.

In the end, the Raptors may prove to be the beneficiary.

With a qualifying offer just north of $2 million, a re-signed 22-year-old Trent, would join a young core featuring VanVleet, Siakam, OG Anunoby and whatever pieces Ujiri is able to extract from whichever team the Raptors eventually sign-and-trade Kyle Lowry to (the assumption of a sign-and-trade is fair considering the circumstances).

All things considered, despite entering play on April 11 with a 21-32 record, there’s reason to believe that brighter days are ahead for the Raptors.

In short order, Trent has already given the team reason to believe that the March 25 trade will end up being another move on the resume of Ujiri that proves to be a good one. And if nothing else, the president up North deserves credit for making a move that seems minor on paper, but one that at least provides the club with a beacon of hope as it continues to salvage its 2020-21 season.

Rockets would consider Westbrook-for-Wall swap
yesterday
MORE:
NBA
Raptors

Roundtable: Who is the most underrated player in the NBA?
Memphis to bring back guard Tim Frazier on 10-day contract


What if the Los Angles Lakers didn't trade for Russell Westbrook?
44 min