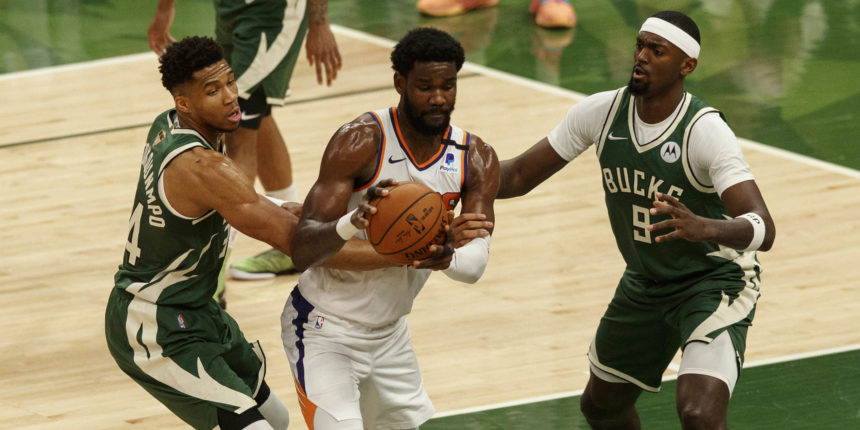 MILWAUKEE (AP) — Phoenix Suns center Deandre Ayton said the foul trouble he had in Game 3 won’t impact the way he plays the rest of the NBA Finals.

Ayton finished with 18 points and nine rebounds, but played less than 25 minutes in Phoenix’s 120-100 loss to the Milwaukee Bucks on Sunday. He ended up with five fouls, the first time this postseason he committed more than four in a single game.

“I’m not going to let none of those foul calls change my aggression,” Ayton said

Phoenix owns a 2-1 lead in the series heading into Game 4 on Wednesday.

Ayton is averaging 16.7 points and 13 rebounds in the Finals. The Suns’ lack of size makes it imperative that Ayton stay on the floor.

“I’m not going to let that game bother me, to be honest,” Ayton said.

Ayton said he planned to “just show my hands early, letting the refs know where I’m at, feeling the refs out throughout the game, on my physicality, how I’m playing my defense.”

Milwaukee would like to get Ayton in foul trouble again Wednesday night. Ayton said he has done his homework and plans to avoid the same problems the rest of the series.

“I think that’s an awareness that I see on the court where they’re trying to attack me,” Ayton said, “so it’s just me bracing and being aware of what’s coming next.”

Even as he’s in the NBA Finals, Bucks forward P.J. Tucker said he is still getting accustomed to playing with his new teammates after coming over from the Houston Rockets in March.

“When you get traded in the middle of the year people don’t know how hard it is,” Tucker said. “It’s so hard to go from one team to another, whole change of scenery, new people, new everything. It’s a 24-, 48-hour turnaround and you’re playing a game.

“For me, that’s something I pride myself in, being able to be a chameleon, kind of get in, feel the situation out, what I need to do to help us win, and so on and so forth. That’s something to this day I’m figuring out every day, just trying to get better, be a better teammate, be a better vet, be a better player.”

That Finals experience was different from most, with the entire postseason taking place in the Walt Disney World bubble. Even so, Crowder believes he can draw upon those memories while talking to teammates.

“I definitely tried to use that experience leading up to this point of helping my teammates, letting them know that it’s hard, it’s very hard basketball, two teams colliding, giving maximum effort for it all,” said Crowder, who scored 18 points and shot 6-of-7 from three-point range in Game 3. “It’s the hardest thing we’ll do as a professional athlete, I feel like.”

But Crowder doesn’t believe his successful playoff series against the Bucks last season has any bearing on this year. Crowder averaged 15.2 points and shot 43.1% from three-point range when Miami upset the top-seeded Bucks in the second round.

“I don’t think they go hand in hand at all,” Crowder said. “I honestly feel like those guys, respectfully, are better than they were last year. And I feel like me as a player, I’m better than I was last year.”

Players offered different opinions on the playoff schedule that gives them two days off with no travel between Game 3 and Game 4.

Bucks guard Jrue Holiday liked the extra rest, particularly since they had so little time to get ready for the start of this series.

“It’s great,” Holiday said. “The season has been weird. We won Game 6 of the Conference Finals. We landed at 2 that morning and had to leave 6 at night to go to Phoenix.”

Suns guard Cameron Payne acknowledged the potential benefits, but would have preferred a shorter wait.

“Shoot, I’d rather go ahead and play, especially when you lose a game,” Payne said. “You’re ready to play 30 minutes after the game is over.”

Mancini has made a successful comeback this year after sitting out the 2020 season to undergo chemotherapy for stage 3 colon cancer. He reached the final round of the Home Run Derby before losing to New York Mets slugger Pete Alonso.

“I was on the team when he won the Home Run Derby at the Big East Tournament down in Clearwater, Florida, and I remember him saying to our assistant coach Chuck Ristano, ‘If I ever got to the MLB Home Run Derby, I’ll have you pitch to me,’ “ Connaughton said. “And (Ristano) pitched to him last night.”