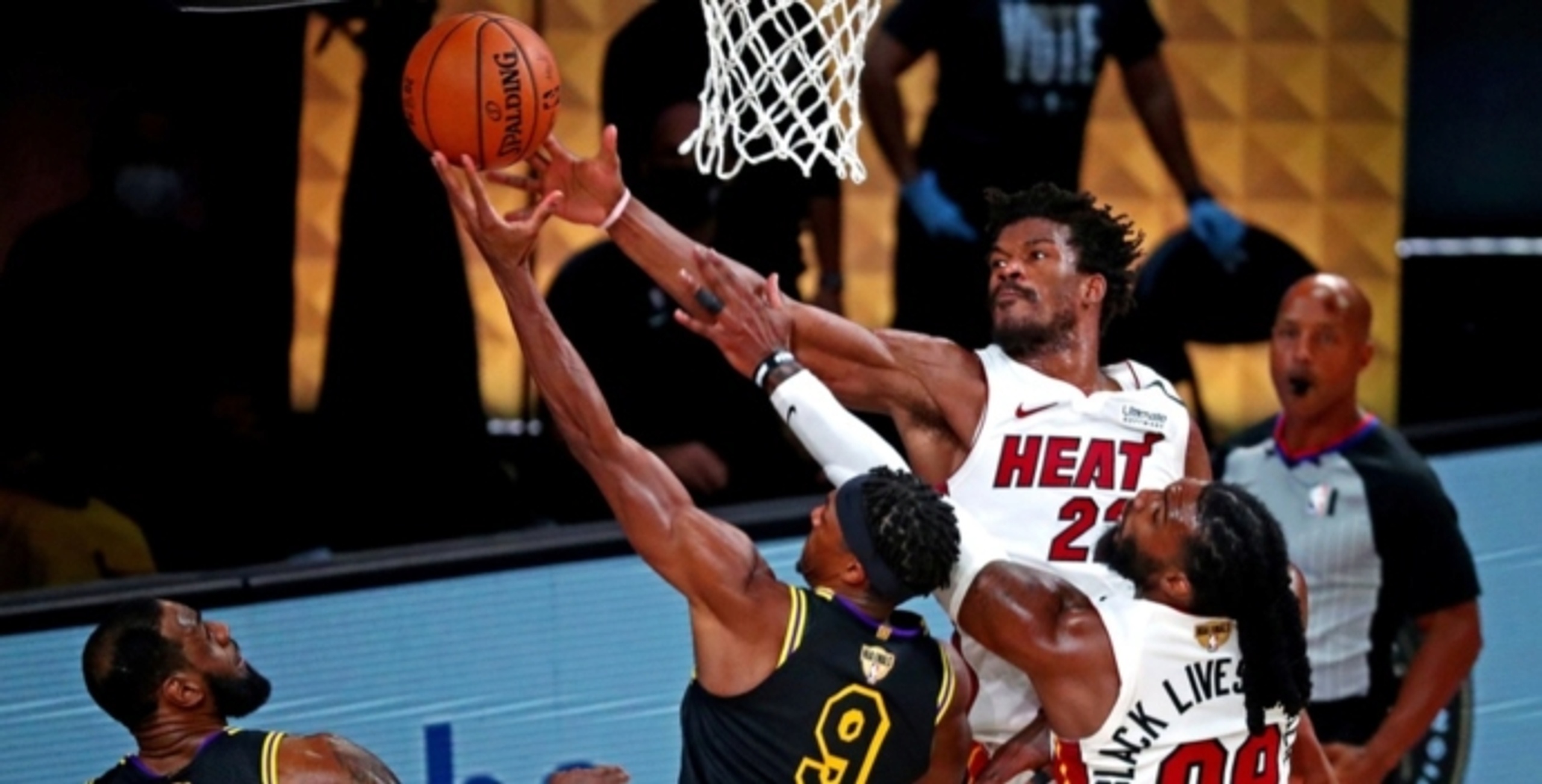 Jimmy Butler was slumped over a video board behind the baseline in the final seconds, exhausted, gasping for air.

He gave it all.

The Miami Heat needed nothing less.

The NBA Finals — and Miami’s title chances — are not over, not after Butler and the Heat pulled off a virtuoso performance in Game 5 on Friday night. Butler had 35 points, 12 rebounds and 11 assists, and the Heat held off Los Angeles 111-108 to cut the Lakers’ lead in the title series to 3-2.

“That’s Jimmy Butler,” Heat center Bam Adebayo said. “That’s our max player and that’s who we go to in these moments.”

With good reason. He didn’t let them down, not even on a night where LeBron James — seeking a fourth title and the player with the best closeout-game record in NBA history — was masterful.

James had 40 points, 13 rebounds and seven assists for the Lakers. But on the possession that decided everything Friday night, the Heat forced the ball out of James’ hands by basically sending three defenders at him as he drove down the right side of the lane, the Heat up by one, the Lakers only needing one basket for a title.

He found Green alone atop the key; Green’s shot was well short and the Heat closed it out with a pair of free throws.

“It was a little bit of luck that Danny Green missed that shot at the top of the key,” Butler said.

Anthony Davis — playing through a bruised heel — scored 28 points, and Kentavious Caldwell-Pope had 16 for the Lakers.

Los Angeles broke out all the stops: Davis had shiny gold sneakers on, the hue similar to the Larry O’Brien Trophy, and the team made the decision earlier in the week to skip on the scheduled purple uniforms and wear the black ones designed and inspired by Kobe Bryant instead.

But Bryant, oh, how he would have loved this fight. Drama, all the way to the end.

Robinson’s 3-pointer with 3:13 left put Miami up by two, and started a stretch where the next nine scoring possessions from either side resulted in a tie or a lead change.

Back and forth they went. Butler got fouled with 46.7 seconds left, then slumped over the baseline video boards, clearly exhausted. He made both foul shots for a one-point lead; Davis’ putback with 21.8 seconds left got the Lakers back on top.

“We were very close,” Lakers coach Frank Vogel said. “I felt two bad calls at the end put Butler to the line, you know, and that’s unfortunate in a game of this magnitude.”

Heat coach Erik Spoelstra used his last timeout after Davis’ go-ahead score, just to buy Butler a couple minutes of rest. Butler drove the lane, drew contact and made both with 16.8 seconds left for a 109-108 lead.

“Every young player coming into this league should study footage on Jimmy Butler, the definition of a two-way player competing on both ends, five steals, and then making those big plays down the stretch for us offensively,” Spoelstra said.

Thanks to Butler, who played all but 38 seconds, they escaped. The season continues.

“This is the position that we’re in and we like it this way,” Butler said. “And we’ve got two more to get.”

Heat: Point guard Goran Dragic (torn left plantar fascia) missed his fourth consecutive game. He was hurt in the first half of Game 1. “I pray, I hope, that we get 7 back,” Butler said. ... Butler had 22 points in the first half, the second-most in Heat finals history. Dwyane Wade had 24 at halftime of Game 4 of the 2006 finals. ... Robinson made seven 3-pointers.

Butler became the sixth player in NBA Finals history to have multiple triple-doubles in the same title series: Magic Johnson and James have both done it three times, while Larry Bird, Wilt Chamberlain and Draymond Green have done it once. “He’s been as close to perfect as you possibly can get,” Adebayo said.

BasketballNews.com Analysis: Jimmy Butler delivered another incredible (and efficient) performance to force Game 6, which will be on Sunday evening at 7:30 p.m. ET.

As two-time champion David West said in our Virtual Watch Party: "You don't wanna go to a Game 7. I was in this situation a couple of times in Indiana. Game 6 is the Lakers' Game 7."