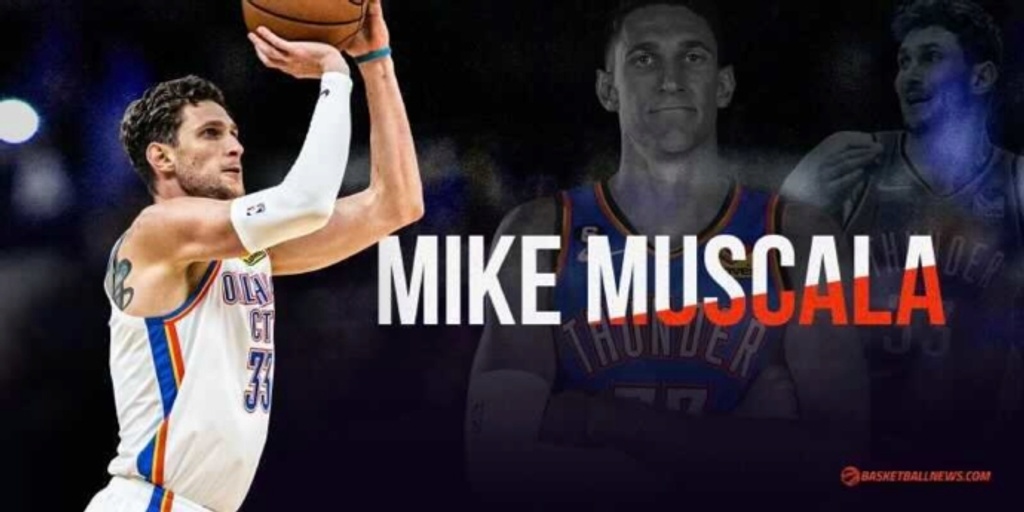 When the Oklahoma City Thunder begin their season against the new-look Minnesota Timberwolves on Wednesday night, it will officially mark the start of Year 10 for veteran big man Mike Muscala.

And for the 31-year-old Muscala, this season is about a lot of things – improving as a player, OKC growing as a team, mentoring the young core, and, most importantly, uniting people through basketball.

Before the official start of his 2022-23 season, Basketball News had the chance to catch up with Muscala. We talked about his unique charity initiative with PeacePlayers International, his role as a mentor on the youngest team in the league and the expectations he has for his teammates’ development this season.

While at the Orlando Bubble in 2020, you were involved with a non-profit organization called PeacePlayers International. Can you tell us a little bit about your involvement with them, particularly while you were there?

Mike Muscala: “In the Bubble, I donated $100 for each three we made. I first heard about them through a friend I went to college with at Bucknell. He told me about them probably eight [or] nine years ago.

“I got to know one of their co-founders, Brendon [Tuohey]. I just feel like their mission was really cool – bringing people together through basketball all around the world. I felt like [the three-point pledge] was a cool way to be able to donate to them, [and] help fund some of their operations as they work in a lot of U.S. cities like Detroit, [Los Angeles], and Brooklyn.”

(Note: Despite the Thunder only making 188 threes in 15 games during the Bubble (which would equate to $18,800 in donations), Muscala ended up contributing $23,000 to the PeacePlayers organization.)

There are thousands of charities out there, why choose PeacePlayers?

Muscala: “I think it was just how specific it was to basketball. I’ve been really fortunate to have met a lot of people through basketball that I probably would not have met otherwise. The fact that they are focused on bringing people together — especially in areas with a longstanding history of divide and conflict amongst people — I thought it was so cool that youth basketball [was being used] as a vehicle to help resolve some of those conflicts.”

From your experience working with this organization, have you seen some positive change come out of this?

Muscala: “Yeah, just seeing some of the studies they have run on what they have done. Hearing interviews from girls being like, ‘I would have never played or gotten to know this other girl had it not been for PeacePlayers, and now, we’re friends.’ Just seeing stuff like that is so cool. Putting people together, to meet one another [and] to become friends is cool.”

After all your success with the organization in the past, you are now trying to continue your work with PeacePlayers in 2022-23. What is your plan for donation this season?

Muscala: “My plan is to donate $100 for every offensive rebound we get this year, which is kind of similar to the three-pointers made [pledge] that we did in the Bubble. Brendon said it was fun for them when we did that. And I just thought it’s an area of focus for me, personally, and our team this year, so it was a good way to tie all that together.”

Okay, why is offensive rebounding a focus for you and the Thunder?

Muscala: “I think with an offensive rebound, [what it] signifies in terms of hard work and hustle, [is] starting anew, all that stuff. People love to see that in a game, and I just thought it could be something fun for us to do, something motivating throughout the season.”

Last season, OKC finished 12th in offensive rebounds per game. That's already a solid mark, but there is still always room for improvement. Does the team have any plans for increasing that rate and, ultimately, the total of the donation?

Muscala: “Yeah, we’ve talked about it as a team. We have some tactics that we focused on [and] practiced. Specific times to crash [and] get on the boards, especially [cutting] from the corners. With more threes being taken every game, [there’s] more of those long rebounds.

"If you just cut with a purpose, [even] if you don’t get the ball, [have] the awareness to go up and try to rebound. Like Nicolas Batum last year, I feel like he did a great job of cutting and keeping possessions alive. That’s so deflating for a defense. Find creative ways, but also putting in that work. A lot of times, it's just [about] hustle and kind of a mindset; it’s something I used to be pretty good at early in my career and something I want to get back to [now].”

Last season, you finished 19th in the NBA in Dunks and Threes’ EPM metric, and you were one of two players 6-foot-10 or taller to shoot over 40% from three (All-Star big man Karl-Anthony Towns was the other). You clearly can still contribute at a high level, so why re-sign with a rebuilding Thunder team instead of offering your services to a potential title contender?

Muscala: “This will be my fourth year with [Oklahoma City]. I really do believe in this team and this organization. It’s a young team, but I love all the players that I get to play with, the coaching staff, [and all] the people in the organization. What this team means to this city is special. Being around for this process has been fun for me. There are a lot of great teams in the NBA. I’ve been fortunate to play for a few other ones, but I love what [Oklahoma City] stands for, and I’m just happy to be here.”

Moose had to be shut down midseason because a 7 footer hitting 4 or 5 3s off the bench every game isn’t a wise way to end up with a Top 5 draft pick.

Mike’s love of OKC and the fans here has endeared him to the Thunder faithful. pic.twitter.com/F0N6WDotxi

You and Chet Holmgren are both from Minnesota, and part of your responsibility on this team is helping him (and the other youngsters) grow. How do you think your desire to mentor this new generation correlates with your desire to be so active in charity work?

Muscala: “I think it's just [about] giving back to the game. You know, I want to coach when I’m done playing. I think that’s just the way to pay it forward. When I was a younger player, I had older players that led by example, like Al Horford, Paul Millsap [and] Kyle Korver. Guys like that, showed me... what focus and consistency were all about.

“I think as I’ve gotten older, I’ve been more grateful for basketball. I think everyone can relate to that, you know? As [we] get older, [we] appreciate the things that have gotten [us] to this point. As an older player now, it’s fun to still play the game, but also [important to be] around for the young guys because soon, it will be them in my position, giving back to even younger players. The cycle just goes on and on.”

It's a new year with new excitement and new hope. How excited are you to see the growth of guys like Shai Gilgeous-Alexander, Josh Giddey and the rest of the young core?

Muscala: “I’m really excited. Tre Mann also had a great summer. It was a really good preseason. (Mann averaged 16.0 PPG on 66.3% True Shooting). I’m happy for them and excited to watch them continue to grow because they put the work in, always focus, are humble — and [they] want to get better.”