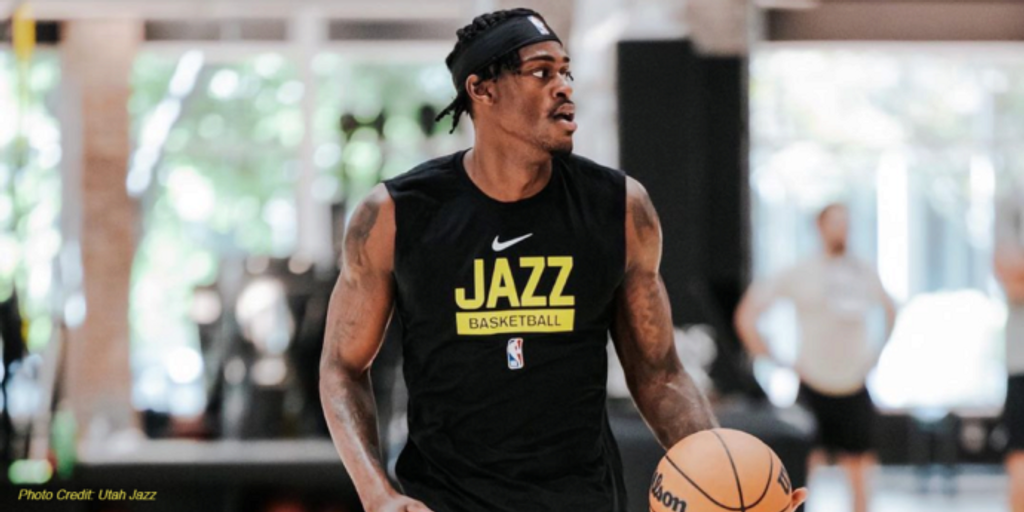 With Rudy Gobert in Minnesota and Donovan Mitchell in Cleveland, the air in Salt Lake City has that new car smell.

Whether it be a plethora of players or new head coach Will Hardy, the Utah Jazz have brought a number of fresh faces this offseason to clear the slate and start from scratch. Speaking on Monday, Utah general manager Justin Zanik and executive Danny Ainge spoke to the optimism they both have for the franchise.

"I think the fans can expect fun and excitment, energy," Ainge told Jazz play-by-pay announcer Craig Bolerjack. "I feel it in the gym already this summer. There's so much enthusiasm. We have youth, we have two first-round picks (one lottery pick)... I think there's a lot to be excited about."

Though much of the attention in the city was on Collin Sexton and Ochai Agbaji's opening press conference on Tuesday, Basketball News had the chance to catch up with another one of Utah's up-and-coming talents, Jarred Vanderbilt.

The 23-year-old was a key acquisition for the Jazz from Minnesota for Gobert, particularly because he's coming off a career season where he averaged 6.9 points, 8.4 rebounds and 1.3 steals in 25.4 minutes per game in his first full year as a starter.

In the following Q&A, Vanderbilt shared his thoughts on being a part of the big trade, the Jazz's direction, gaining more experience as a player and what his next steps are.

How have you spent your summer? What kind of things have you been working on?

Are you viewing this opportunity as a fresh start? What are you hoping to bring?

Vanderbilt: "For sure. Any time you go to a new team, it's a fresh start, it's change and it's an opportunity to continue to grow. That's what I'm looking forward to."

It’s a brand new beginning for the organization as well. What have Will Hardy and the front office said to you since the move?

Vanderbilt: "That we're just building something special. It's an opportunity for me and them as well just to grow individually, as a team and as an organization. It's a fresh start for everybody — new staff, new coaches, a lot of new players. So right now, we're just getting to know each other."

In what ways are you hoping to grow?

Vanderbilt: "In every way. Being able to grow my offensive game as well. Being able to become a better finisher, better shooter, better defender. Pretty much just [getting] better in every aspect of my game. I feel like I've made the jump every single year that I've been in the NBA, so I just want to continue that upward path."

Is it easier on you personally having Malik Beasley there? You guys have been teammates your whole career everywhere you’ve gone.

Vanderbilt: "Yeah, it's always easier when you're traded with a familiar face. I've been with Beas since I started. We've been on three teams together and pretty much have been in every single trade together as well, so it's always good to have a familiar face and some familiarity with a player that you've been around and played with.

"We joked about it the other day. We were playing pickup and we did a pick-and-roll. He threw a lob to me, and he was like, 'Yeah, that's that three-team connection' (laughs). We definitely have a lot of chemistry together just from playing for so long. We've been playing together almost five years, so we've just got that connection."

You only played against Collin Sexton once in school, but you’ve met a few times in the pros. What are your impressions of him? Have you guys talked?

Vanderbilt: "He's a dawg. He's a great dude. I've been knowing him since high school. He's been a super competitor. One thing about me, I love dawgs. I love guys that like to compete, and ever since the first day I met him, I noticed that about him. He's been an extreme competitor, hates to lose, and he just competes every time down. I can go to war with a guy like that any time of the day."

For you, it seems you’ve really established yourself the last couple years as far as solidifying yourself as a legitimately impactful NBA player. In what ways have you matured, and what’s helped the most?

Vanderbilt: "I think I've matured in every way. I think what helps that is just experience. You can't beat experience, especially for me. I missed out on a lot of basketball due to some injuries from high school to college. So just being able to play, get games under my belt, there's nothing like experience. And just with age [too]. You get better with age and experience. You can see the difference each year. I've grown in the mental aspect of the game, just learning the game, your IQ grows. Just everything. Like I said, just being able to play basketball and get that experience, it goes a long way."

In particular, what did that experience in the playoffs do for you in Minnesota? I'm sure that's a different lens.

Vanderbilt: "It just gave me a sense of that next level, that next step. Obviously, we had a great year last year [in Minnesota] and we made the playoffs, but it kinda gave us an understanding that it's levels. Obviously, we were just a young team; we made a lot of young mistakes, and that was our first playoff run. So like I said, experience goes a long way. You watch the Grizzlies their first playoff year, they kinda had the same little young mistakes that we made [in Minnesota]. And then next year, when they played against us, you could kinda see the growth that they did in just that short period of time. That experience goes a long way. You can just tell.

"The playoffs are about details and execution. Every little play matters, every little thing matters, and you don't really understand that until you get there and you're actually playing it live and going through it and watching that film like how every play really matters. You've gotta be really disciplined, really detailed and really efficient."

Speaking of last season, I want to gauge your reaction to the Gobert trade. How did you feel and how did you find out?

Vanderbilt: "I kinda found out right before it happened. I wasn't going to say I was really surprised about it. I knew at that point anything could happen with new management and stuff. This is my second time getting traded, and ironically, by the same person (former Denver Nuggets general manager and current Minnesota Timberwolves president Tim Connelly), so it wasn't really as much of a shocker like it was the first time. After that first time, I just realized it's a business and it's part of it.

"Now, I always just try to look at the positives like I'm able to go to a team that's allowing me to grow and continue to grow and expand my game. Like I said, I always try to look at the bright side and positive things. And honestly, the fact that another team wanted you, being in this league. I was able to showcase my game last year, so that's all that matters to me."

You’re still only 23 and going into your fifth year. That’s unique because there are some rookies and second-year guys that are older than you! Considering you’re quite far into your development, how much further do you feel you have to go individually to get where you want to be?

Vanderbilt: "I feel like I have a long way to go. But being here in Utah, they're giving me the opportunity to expand and grow those aspects of my game. Last year, I was just able to get my feet under [me]. Even though it's my fifth year in the league, I've only played legitimate minutes probably about one or two years. Those first few years were just like a learning experience and me getting my feet under me and stuff like that. So I'm excited about this year just having a good, fresh start and just being able to contribute and grow. I'm excited."