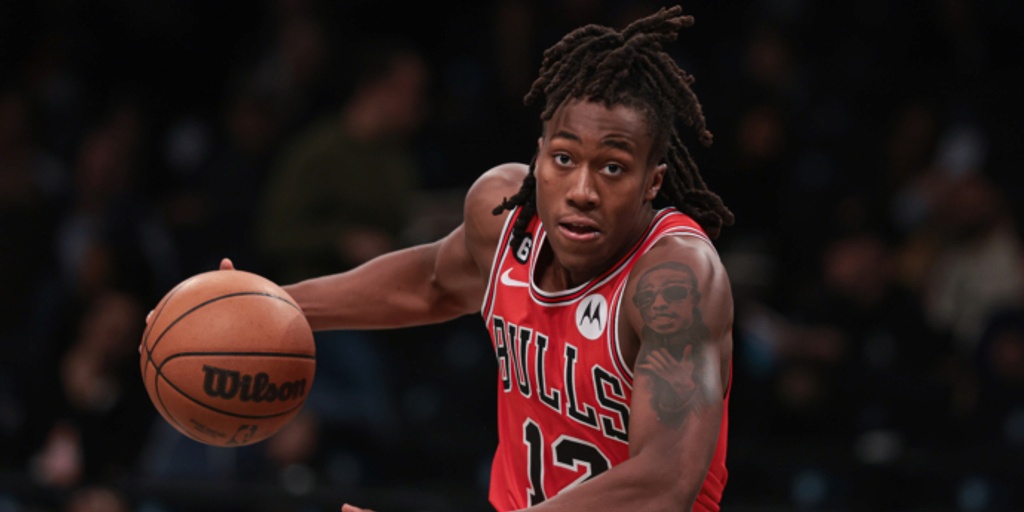 I'll be the first to admit I'm a numbers guy.

I mean, I write the Stats Notebook at Basketball News. The NBA Stats site is a top page in my browser, and PBP Stats, BBall Index and the like can become rabbit holes if I have too much free time. Statistics are a chronology of moments, making the past tangible and the future ever-so-slightly more predictable.

Stats also never tell the whole story. Ayo Dosunmu might be this year's case in point.

The second-year Chicago Bulls guard has been one of my favorite individual players to watch in this early 2022-23 season. Dosunmu is averaging 12.5 points, 4.1 rebounds and 3.1 assists per game and has seen his production rise in accordance with a slight minutes bump.

However, his 59.2% True Shooting percentage is a hair down from last year (still quite good by the way!), his assist and turnover rates have also dropped a bit, and he's recorded a -42 plus-minus on the season despite the 6-6 Bulls losing just one game by double digits.

People probably look at those surface numbers and shrug their shoulders. But watch Dosunmu and witness his versatility, creativity and electricity jump out of the screen.

Watch only Ayo Dosunmu throughout this defensive play.

This is the stuff you don't catch if you're only watching the ball, GREAT off-ball defense that blew up this possession. pic.twitter.com/9LzLrUeZJv

Dosunmu completes three significant actions here, and only one (the assist to Zach LaVine) lands in the box score. He slinks through the off-ball screens to cover Jaylen Brown and nullify a primary piece of Boston's set. Then, with Brown in a minimally-advantageous spot in the corner, Dosunmu helps out on Jayson Tatum's drive, effectively contesting the shot that ultimately gets blocked by Patrick Williams. Dosunmu then grabs the loose ball, immediately looks up and hits LaVine in transition.

DeRozan guarding Tatum in the corner. LaVine leaves his man to help.

Ayo slides down to cover both his and LaVine’s man.

Brown cuts to the basket so Ayo covers him.

Tatum beats DeRozan so Ayo helps by sliding down to protect the rim. pic.twitter.com/m1DItCVSmm

Hoops Informatics highlights another possession from the same game. Dosunmu starts this clip by covering two players on the weak side. When he sees LaVine slide back toward his corner and catches Brown cutting into the paint, Dosunmu shuts off the option. He stays engaged with the ball, though, and then helps again on Tatum's baseline drive.

Here's one more moment — this time from Chicago's first game against Boston, a 123-119 win:

- Smart needs to pass the ball earlier than he did
- Tatum actually does this well but at this point its to a worse above-the-break shooter
- Bulls are helping aggressively and Boston isn't making them pay
- Look at Ayo Dosunmu just flying around pic.twitter.com/WDt5HQkKcD

The multiple defensive efforts in myriad forms are remarkable, and they take a combination of schematic understanding, processing speed and, simply, quick legs. Dosunmu's internall throttle is always to the floor — even if it leads to the occasional over-revving.

"Ayo was, basically all last year, just playing off the feel," teammate Alex Caruso told Basketball News over the offseason. "Your first year in the league, you don't understand concepts really. You don't understand coverages. You're seeing guys play, and you're playing against guys for the first time. You're seeing their best moves for the first time; they're probably going to beat you most of the time. So for him to be able to compete the way he did last year on defense is a great sign for a guy in his first year."

Dosunmu's knowledge base is catching up in Year 2.

He molds his same spark to a different context on offense. He's been a second-side driving weapon since joining Chicago as a 2021 second-round draft pick, and has continued to flourish by attacking off the catch. Dosunmu's overall rim frequency is down a tad from last year, but don't let that fool you; he's still a force getting to the basket.

According to PBP Stats, 56 players have attempted over 40 self-created shots (when holding the ball for two or more seconds) from within 10 feet of the hoop so far. Dosunmu is hitting on 55.8% of those attempts, ranking 17th. Over 47% of his shots have been self-created compared to just 39.4% as a rookie. So while the efficiency has regressed slightly in this small sample, Dosunmu still shows plenty of promise.

He's adept along the baseline, and defenders that force him there are only giving him space to attack and windows to hit teammates. Dosunmu almost always receives 1-on-1 matchups; how can a defense justify leaving LaVine, DeMar DeRozan or Nikola Vucevic?

The problem for those defenders, however, is that Dosunmu can beat individuals with an isolation drive. He's got a shifty handle, sneaky change-of-pace chops, length and touch.

The 22-year-old can also break out a solid floater. He doesn't often — only 10% of his shots are in the short-mid-range area, per Cleaning the Glass — but against the Charlotte Hornets, Dosunmu used it with success.

Dosunmu guarantees spectators at least a handful of "Man, this guy is flying!" plays every game, whether it be via a transition push-ahead, a half-court drive or a defensive rotation.

Plus-minuses and box scores can shove it — this guy is undoubtedly a winning contributor.