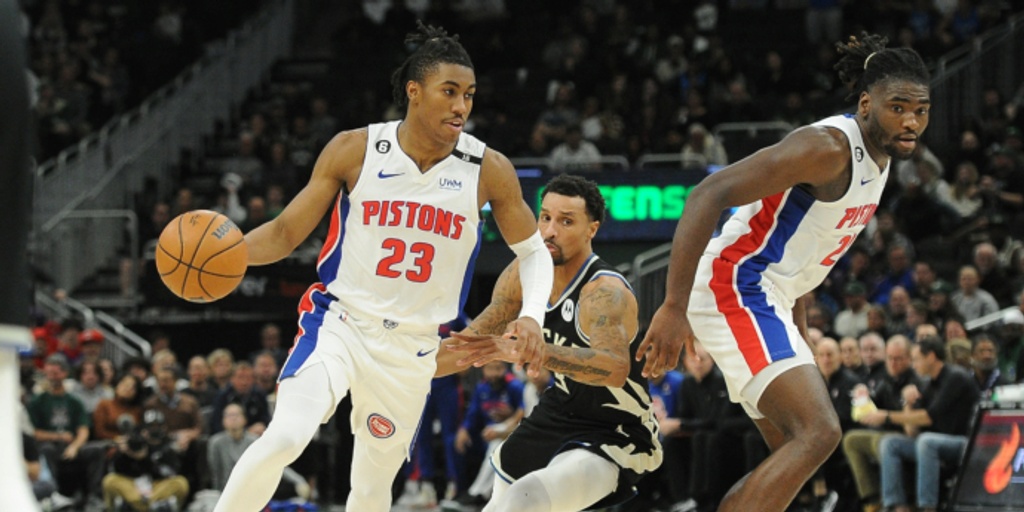 Paolo Banchero is overwhelming opponents with his unique combination of power and touch. Bennedict Mathurin is slicing and swishing his way to the top of the bench-scoring leaderboard. Keegan Murray has canned nearly 40% of his threes and ascended to the Kings' starting lineup; they're quietly 2-1 in the early returns of his promotion.

Those three standouts have paced the 2022 class through the first two weeks of NBA action. However, while he hasn't been in quite the same stratosphere, Jaden Ivey has also surged onto the scene. The fifth overall selection is putting up a cool 15.7 points, 4.3 rebounds, 3.7 assists and 1.3 steals per game with the Detroit Pistons, and has reached double-digit points in each of his seven games played.

Detroit (2-6) might not be winning a whole lot — and backcourt partner Cade Cunningham has understandably received more shine for his oustanding start to his second season — but let's not overlook Ivey, who has bolted to the basket with the energy that sparked his rise to the upper echelon of the NBA Draft.

Jaden Ivey finishing through Giannis (!!!) with his left hand (!!!!) pic.twitter.com/J9mPoQHjJn

Ivey went 8-for-17 from the field en route to 19 points in Monday's narrow loss to the undefeated Milwaukee Bucks. He torched some of the best individual guard defenders and big-man helpers in the league, including Giannis Antetokounmpo as shown above.

Ivey's ludicrous burst, long-stride size and length were hallmarks of his pre-draft scouting report, and those traits are translating seamlessly. He's also got this remarkable ability to keep the ball low and out of a defender's blocking range until the last possible moments, where he can flip a shot up and finish. That takes serious focus and upper-body strength, in addition to the vertical explosion to get to these shots:

Ivey is driving the basketball 11 times per game according to Second Spectrum, which is second among rookies behind Banchero — a bar cleared by 39 NBA players this season. Among the 65 high-volume attackers averaging eight or more drives per game, Ivey's 54.8% shooting efficiency ranks 13th and his 14.3% assist rate is 10th. Luka Doncic is the only other player in the top-15 for both categories, and RJ Barrett, Malcolm Brogdon and Spencer Dinwiddie are the only others in both top-20s.

He only had one assist against Milwaukee, but it was a notable one that showed he doesn't have to use downhill speed to create openings.

Ivey probes here with an empty-corner drive and is looking to engage Brook Lopez. He knows the Bucks defend pretty conservatively off the ball, so he pins Jrue Holiday on his hip, wades in until he has Lopez's attention, and, then, hits Isaiah Stewart for the easy dunk. It's a simple play, but it shows Ivey is understanding how to attack and manipulate an opposing set defense.

These downhill drives and dishes, however, draw remarkable contrast. Ivey gets a head of steam, but still has the wherewithal to notice a rotating defense and his sliding players. This leads to some highlight-reel assists; his 6.5% turnover rate on drives is also solid, particularly for a rookie.

Jaden Ivey has been everything we could have expected as #Pistons fans through 7 games this season.....and the exciting thing is, he can get even better

If he ever gets comfortable making these in between shots, an area he did struggle in college, good luck trying to guard him pic.twitter.com/NBb7z3Ihtk

As Bryce Simon (@MotorCityHoops) points out, Ivey finding a mid-range rhythm is the next step to becoming a more well-rounded threat with the ball in his hands. He's just 5-of-22 in the mid-range so far and some of the misses look ugly. But Ivey fortunately doesn't have to carry a primary creator load — that falls on his partner Cunningham (and sometimes Killian Hayes), and allows him to devastate teams away from the ball.

In a very tiny sample size, Ivey is 7-for-10 shooting on cuts so far, per Synergy. The efficiency is nice, but more notable right now is how he's seeing spaces open up and attacking them. Ivey recognizes how a ball-handler will draw in the defense and create pockets of opportunity. In this way, he draws some similarities to Bruce Brown, a point guard who used his court mapping to morph into a dynamic cutter:

Ivey probably won't follow the Bruce Brown track; he's far more dangerous with the ball in his hands. But cutting effectively gives him another way to play next to Cunningham while he's learning the ropes as a lead NBA guard.

The 20-year-old has been streaky so far as a long-range shooter (though a 34.5% clip isn't so bad), and he's got plenty of room to improve on defense — like most rookies. But it's exciting to see some of Ivey's best attributes translating to the court right away, and it's promising that he's doing more than just charging into a crowd and hucking up shots. Approximately 47% of Ivey's total shots have come at the rim, per Cleaning the Glass, ranking in the 94th percentile among combo guards. He's finishing off a more-than-respectable 68% of those shots.

If Ivey is reading the floor this well, this early, imagine what he could look like by the end of the season. He's as much a frontrunner in the Rookie of the Year race as any other candidate, and is already part of what makes the Pistons a must-watch young team.