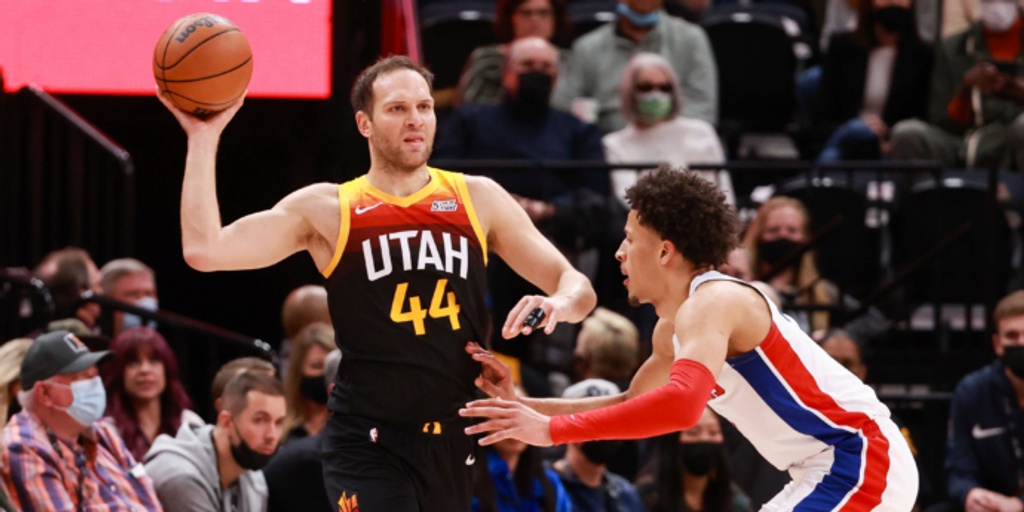 Quietly, the Detroit Pistons’ rebuilding efforts are on the verge of bearing some fruit in short order.

One year after obtaining No. 1 overall pick Cade Cunningham, who took a serious jump post-All-Star break by averaging 21.1 points, 6.5 assists, 5.7 rebounds and 1.1 steals per game, Detroit is beginning to push some chips into the middle of the table with the hardest part of the equation solved.

Surrounding Cunningham with an infusion of youth with high upside and adequate floor-spacing was atop Pistons general manager Troy Weaver’s to-do list. Following their latest move on the eve of the 2022-23 season, Detroit looks to become an underrated pick for a potential Play-In Tournament run in the Eastern Conference.

On Thursday, the Pistons acquired veteran wing Bojan Bogdanovic from the rebuilding Utah Jazz in exchange for Kelly Olynyk and Saben Lee, according to The Athletic's Shams Charania. No picks were involved in the deal, which is a little bit of a surprise based on the known league-wide interest in the sharpshooter, including from contenders like the Phoenix Suns and Los Angeles Lakers.

Now, Detroit brings aboard Bogdanovic as its instant upgrade at power forward, providing the much-needed perimeter gravity for Cunningham and No. 5 overall pick Jaden Ivey to do their damage attacking the basket. Last season in Utah, Bogdanovic averaged 18.1 points on an excellent 59.9% True Shooting percentage, including 38.7% on three-point attempts.

Within the confines of Detroit’s system, now built around its high-usage guards, Bogdanovic’s biggest strengths will shine brightly. Cunningham and Ivey will set up Bogdanovic consistently beyond the arc, including the corners where he’s shot a blistering 44.6% throughout his career.

While the Pistons don’t stand out as a serious contender, the roster improvements to best build around their young star and enticing core can’t be ignored. The team's new-look rotation with depth is ideally balanced to take a real step forward immediately.

For a young core needing veteran guidance, there aren't many better candidates currently available to upgrade the overall on and off-court situation than Bogdanovic. Burks and Noel will also be key veterans who can be relied upon off the bench as well.

From there, all eyes will be on how this collection of young talent coalesces together over time.

Cunningham is well positioned for a huge step forward in Year 2, including some juicy betting value for Most Improved Player on DraftKings at +2000 odds. Ivey will allow Cunningham to play on- and off-ball seamlessly, plus the addition of Duren as an aggressive, athletic roll man should do wonders in pick-and-roll scenarios for either guard to utilize. Bey, who is entering his third season, is also on the verge of another noticeable jump after averaging 16.1 points, 5.4 rebounds and 2.8 assists in 33.0 minutes per game.

Every box in the Motor City is being checked off as the Pistons look ahead to one of their most promising outlooks in years. A potential renaissance could be in store, and building in this manner around their anchor in Cunningham will soon pay dividends in spades.

Bogdanovic is the latest addition that will fly under the radar for Detroit, a team who looks ready to vault from lottery mainstay to potential postseason threat.