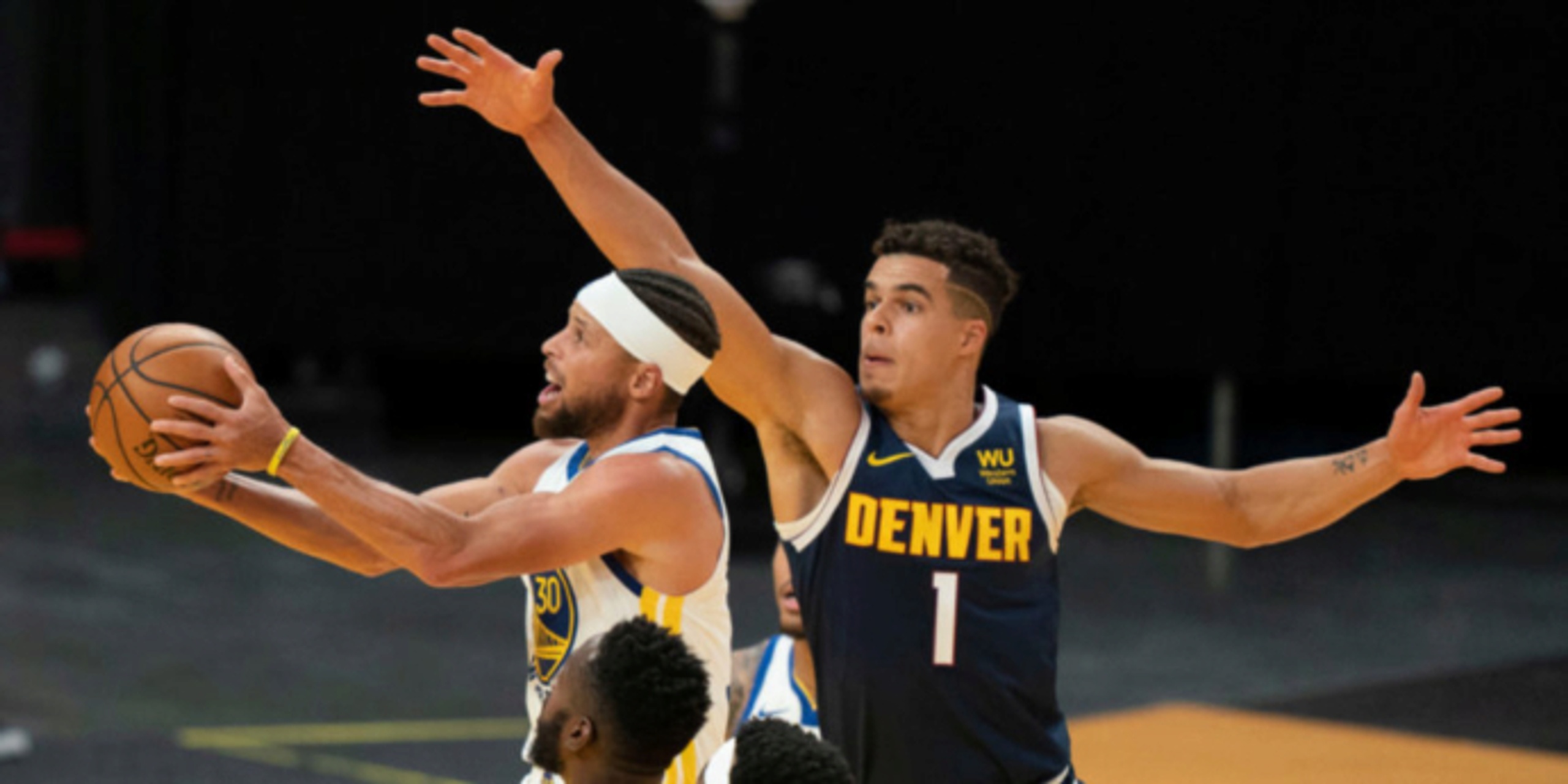 Michael Porter Jr. is his biggest critic, aiming to help Nuggets in other ways

Prior to the Denver Nuggets hosting the similarly-skidding Cleveland Cavaliers on Wednesday night, Michael Malone challenged his group to have a greater sense of urgency and prove that they were tired of losing.

“Right now, we’re not irritating a lot of people except the head coach,” Malone said at his pregame press conference.

The Nuggets put on a clinic in a 133-95 trouncing at Ball Arena to kick off a three-game homestand that will conclude with a visit from the Los Angeles Lakers. From the tip, it was an energetic outclassing on both ends, with unselfishness and a commitment to the defensive end that showed why Denver isn’t one to be messed with when the team is clicking. There were two focus areas for Malone’s staff in their morning “state-of-the-union” meeting with the players: come out of the half with a purposeful mentality and lock in on defense. The Nuggets answered.

“As we all know, this season we’ve had big leads at halftime, and the third quarter has been something that wasn’t very good to us. So I love the fact that the defense for 48 minutes was terrific, 32 assists, 18 deflections -- which shows that we’re being a lot more active. But I was proud of the guys for understanding the importance of playing for 48 minutes and coming out at the half playing a really solid third quarter.

“There’s a reason we went 11-4 in 15 games, ‘cause our defense, it mattered, we cared about it... I’ve said it for six years now -- when you defend, you give yourselves a chance every night.”

Before the win over Cleveland, Denver had dropped three straight and was winless in the first games of February. The group had allowed 122.2 points per 100 possessions and had slippage offensively, which resulted in a negative-12.6 net rating (third-worst in the NBA during that span). Compare that to the 15 games Malone referred to, a stretch where the Nuggets had a top-10 defense and the third-best net rating (plus-7.6) in the league. The difference is clear and obvious -- when Denver puts it together, it’s dangerous. But the effort has to be consistent.

“For us, it’s us getting back on the right track,” said Paul Millsap, who turned back the clock with a 22-point game on his 36th birthday. “When we play the right way, man, we’re a really good team, with everybody in this locker room. We’ve shown halves, we’ve shown quarters, but [Wednesday] we put together four quarters, a full game, and it showed on the stat sheet. We have our mentality we’ve gotta stick to and we have our goals we’re trying to reach.”

Speaking of mentality, Michael Porter Jr.’s has been tested all season long with peaks and valleys, and he is currently in the midst of an adjustment period. Porter came out firing when he returned from the COVID list, notching multiple double-digit scoring efforts to pace the Nuggets’ second unit in late January. However, just as Denver had struggled in the three games to begin this month, so did he, to the tune of 8 points per game on a frigid 30 percent clip (and 18.8 percent from deep).

Malone’s gone back to Porter in the starting five, though, so he’s getting reacclimated with his teammates as far as the balance regarding his involvement on the offensive end goes, as well as figuring things out on the fly as a defender. Denver’s head coach had high praise for the sophomore forward following his latest performance, specifically with how engaged he was on both ends of the court.

“I wanted Michael Porter to know in front of his teammates that I thought he played a great game,” Malone said. “Michael’s had games where he’s put up big numbers for us, but I thought Michael played a complete basketball game -- offensively, shooting the basketball, shooting it with confidence, spacing the floor correctly, defensively, being engaged, helping, being in the right spots... Michael struggled the last five games. We know he’s gonna bounce back. He’s too good of a player, he’s too talented and it was great to see that happen. I was proud of him.”

“It’s tough when you expect a lot of yourself, especially when it’s two or three games strung together when you don’t play your best,” Porter said. “But for me, it’s just trying to take the emotion out of it and really dissect it and understand what I could do to be better and just look at it from that angle. That’s what I’ve been trying to do every game. Obviously, it’s frustrating for me -- I try not to let it affect my confidence, which it can be hard to do -- but that’s how I’ve been trying to attack it is just look at it constructively and how I can get better.”

Porter’s box score didn’t read quite as flashy as his usual loud scoring outbursts -- 19 points, 5 rebounds, 2 assists -- but recording a pair of steals and blocks each is something that he’s only done one other time this year (in the season opener vs. the Sacramento Kings).

The 22-year-old is set on changing how he gets into his rhythm offensively. To this point, he’s admittedly been apt to hang around the perimeter and fire off a bunch of threes, which have determined what kind of night it would be. Since he feels nobody can block his shots, he figured that was the right way to approach getting started. Now, he is going to prioritize attacking the rim off the dribble for closer looks and to get to the foul line, not settling in the process.

Building his rapport with Nikola Jokic has been important as well, and his dribble handoff synergy with the Nuggets’ superstar big man worked like a charm. The two have a good relationship, and Porter emphasizes how much Jokic “gets on him” for knowing how much better the talented young forward can be.

“I think Nikola, he sees me working every day, he knows how hard I work and I think he expects a lot of me,” Porter said. “I don’t take any of that personally because I know I’m my biggest critic. I know I can be better, especially when I have bad games. We’ve got a good relationship on the court. He just expects a lot out from me, he wants me to be helping out, so that’s what I’ve gotta try to do."

“Obviously, the more chemistry that Michael and Nikola create is only going to help us,” Malone said.

Being inserted back into a lineup that features Jokic, Millsap, Jamal Murray and Will Barton has been a work-in-progress for Porter. It might not always be his night to shine on the stat sheet -- and it wasn’t on Wednesday with limited touches -- but there are ways to impact that game in a positive manner. Getting a feel for that part is his next step.

“With that starting unit and there being so many guys who can score and so many guys who can put the ball in the hoop, my job isn’t necessarily to force that,” Porter said. “Everybody knows I can score. I think my teammates just want me to be locked in on the other areas of the game, so it’s not letting scoring determine my energy on the defensive end. And I think that’s what I did that I liked.

“I just felt like I was locked in the whole game, didn’t have too many lapses and that’s progress, just not basing a good game off of scoring. I only shot three times in the first half, but that’s okay. As long as my team’s doing good, I can affect the game in other ways.”

His teammate Millsap pointed out that Denver needs to take it one game at a time, even as far as one quarter and one possession at a time. While that may be a cliche, it would be smart for Porter to take the veteran’s advice on an individual level.

“I just gotta keep it up, keep doing the small things, keep helping my team,” Porter said. “The last few games have been rough for me, so I’ve just gotta continue to get better, continue to be locked in every night and help my team.”