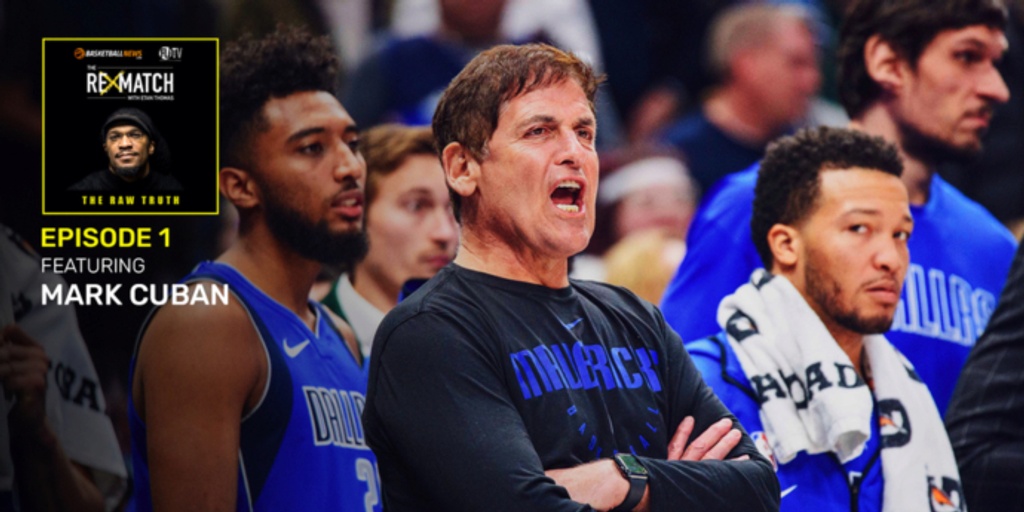 Etan Thomas
Oct 6 2020 7:49PM UTC



"The Rematch with Etan Thomas" is now part of the BasketballNews.com Podcast Network! Etan has had great guests such as Kareem Abdul-Jabbar, Isiah Thomas, Adam Silver, Gilbert Arenas, Joakim Noah, Stan Van Gundy and many others. Check back for new episodes every other week.
This week, Etan Thomas is joined by Mark Cuban, the Shark Tank host and billionaire governor of the Dallas Mavericks. Cuban talks about drafting Etan, Luka Doncic's excellent play, how Doncic compares to Dirk Nowitzki, social injustice, whether he'll run for President, why he's not a fan of Donald Trump, how LeBron James' game has evolved and more. Here are the time-stamps (if you want to jump around):
:25: When Cuban bought the Mavs, Etan Thomas was one of his first draft picks. They talk about that 2000-01 Mavericks team and Cuban's first season running the organization.
2:30: Does Cuban believe Luka Doncic and/or Kristaps Porzingis have the potential to reach the same level as Dirk Nowitzki?
3:35: Cuban says that letting Steve Nash leave to join the Phoenix Suns is his "biggest mistake ever." If the Mavericks had kept Nash, what could that Dallas team have accomplished?
5:55: Cuban talks about social injustice and his reaction to everything that's been happening.
7:10: Cuban shares his thoughts on how the NBA and its players have been using their platform to speak out about these social issues.
8:45: Etan believes that NBA owners should use their collective power to push for even more change, but Cuban says that they don't have as much influence as the public thinks. Etan and Mark talk about what owners can do to affect change.
12:50: Cuban discusses some of the work he's done in the Dallas community, and he shares his thoughts on police reform.
27:55: Cuban talks about Black Lives Matter and who is leading the movement (and whether the victims' family members will emerge as the real leaders).
35:35: Etan and Mark talk about how people try to misrepresent Black Lives Matter and the NBA's association with the movement.
37:55: Cuban considered running for President, but then he ultimately decided against it. He shares why he chose not to run.
38:20: Initially, Cuban supported Donald Trump and they were friends for nearly 20 years. However, in recent years, he's been an outspoken critic of Trump. He details how they became friends and then what changed in recent years.
43:40: "I'd vote for a ham sandwich over Donald Trump." - Mark Cuban
43:50: While he supports Joe Biden, Cuban discusses Biden's economic policies and why he disagrees with some of them.
46:40: Cuban has invested more than $50 million with Black and LGBTQ business owners in the last few years.
47:15: Cuban is an independent. He shares his issues with Trump and the deal-breakers that prevent him from supporting current Republican candidates (even if that would be better for him financially).
49:45: Etan and Mark discuss how people are in their own echo chambers or "narrative bubbles," especially when it comes to politics.
52:20: Etan and Mark discuss COVID-19 and how it has impacted the economy.
55:35: Etan and Mark discuss Trump's response to COVID-19 and his plan to reopen the country is negatively impacting his own supporters.
58:15: Cuban talks about how we still don't know the long-term damage that COVID-19 may cause.
59:25: Etan and Mark discuss Trump's taxes and whether he did anything illegal (based on The New York Times' reporting).
1:01:15: When the Mavs won the 2011 NBA Finals, they beat LeBron James and the Heat. LeBron received a lot of criticism for disappearing in that series. Cuban says James is a totally different player now.
MORE:
Podcast

Mike Brown meets with LAC, Darvin Ham next
Alvin Gentry to join Kings' coaching staff

Featured News

Mavericks acquire Kyrie Irving in blockbuster trade with Nets
11h
NBA roundtable: Which team desperately needs to make a trade?
14h
After trade demand, media bash Kyrie Irving but silent on management
16h
Exploring possible trade destinations for Nuggets' Bones Hyland
yesterday
Exploring possible trade destinations for Nets' Kyrie Irving
2 days
Pat Riley: Kareem never had potential, ‘only greatness’
2 days
Donovan Mitchell, Dillon Brooks get into scuffle; Cavs, Grizzlies react
2 days
Detailing the NBA's stat-tracking process with Neema Djavadzadeh
3 days
WNBA Free Agency: Breanna Stewart to sign with the New York Liberty
4 days
Top News
Suns to be 'incredibly active' before deadline; Chris Paul available?
3h
South Carolina wins rematch of NCAA final to stay undefeated
6h
Banchero leads Magic to win as Hornets struggle from foul line
10h
Steph Curry expected to miss several weeks due to lower-leg injury
10h
Mavericks acquire Kyrie Irving in blockbuster trade with Nets
11h
Nuggets beat Hawks 128-108, tie Boston for NBA’s best record
11h
Jackson-Davis, No. 21 Indiana beat Edey, No. 1 Purdue 79-74
17h
LeBron James closes in on NBA record, Lakers falls to Pelicans
yesterday
Kyrie Irving excused from Nets-Wizards, one day after trade request
yesterday
Zach LaVine scores 36 points as Bulls beat Blazers 129-121
yesterday