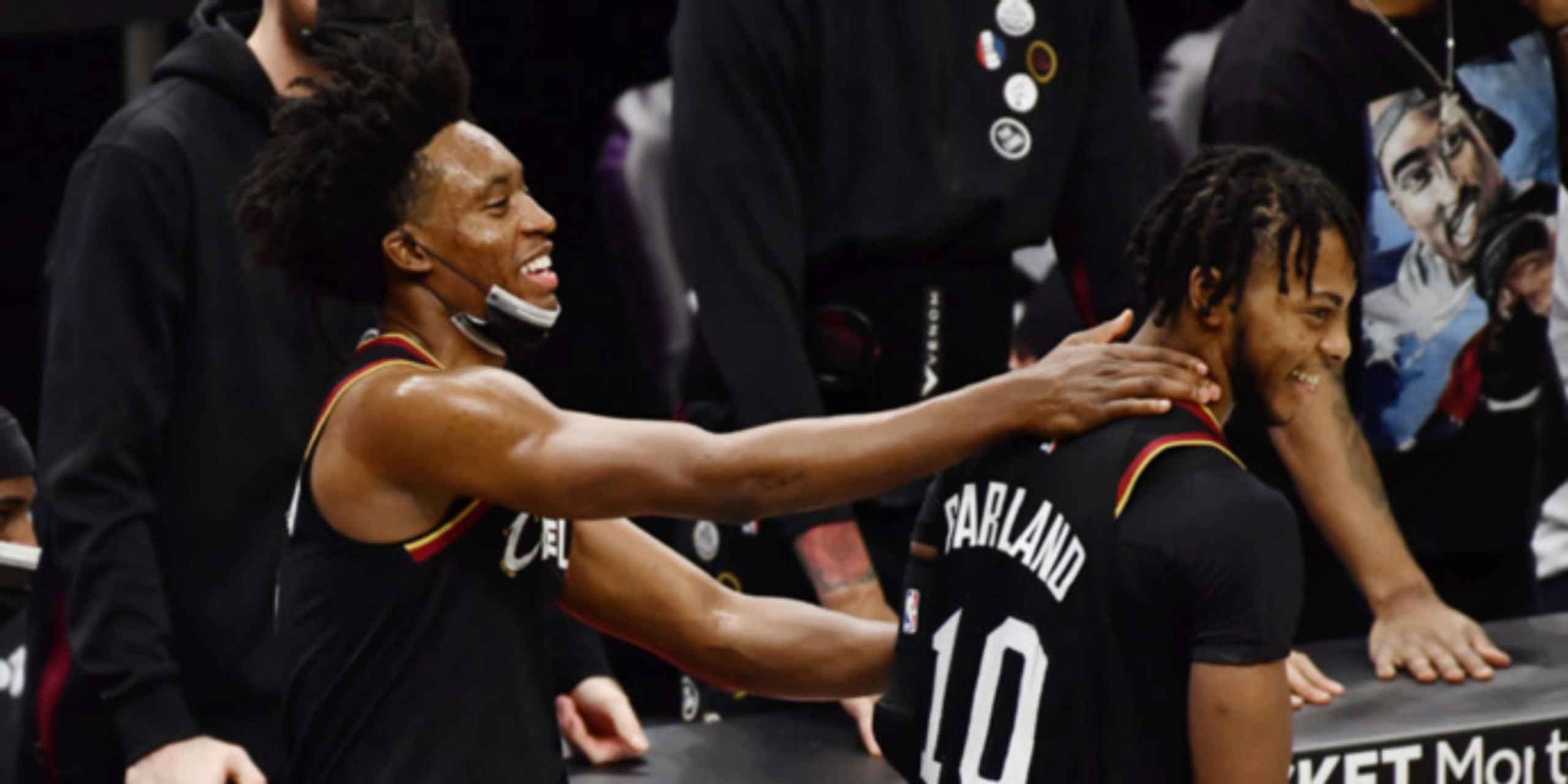 Collin Sexton penned an article for The Players’ Tribune on Wednesday morning, imploring NBA fans across the country to start paying attention to Cleveland Cavaliers basketball again. After all, the wine-and-gold have 10 wins already, a mark they didn’t reach until 32 games into the season one year ago.

While that may not seem like a huge step to some, it is concrete evidence that the organization is progressing upward. Sexton detailed as much in his piece, citing how different things feel today compared to when he first got into the league.

Make no mistake about it though, the Cavs still have a ways to go. Building trust is the foundation, and with it, comes the establishment of an identity. At their best, they are a gritty, defensive-minded bunch that annoys the hell out of you with deflections in passing lanes and scraps for loose balls.

Scoring has not been as easy to figure out, as the team’s offense can go from fun and exciting (see the games vs. the Brooklyn Nets and the second half vs. the Detroit Pistons) to bogged down and disjointed (i.e. the last three games they’ve played). You can just tell when there’s a flow vs. when there’s not. Part of it is the injuries that were sustained following a hot start to the season; another is distributing the proper amount of touches between the guards, wings and bigs, in addition to the shot selection as a whole.

But an under-discussed element in this conversation is how young players have to unlearn what they’ve known has worked their entire careers and buy-in to the concept of a team on a consistent basis.

Take Cleveland’s loss to the Minnesota Timberwolves last Sunday as an example. The Wolves have had their fair share of struggles on the defensive end this season, yet the Cavs were only able to muster up 18 points -- seven of which were scored in the final 1:05 of the game off the minuscule three total assists they scrambled for in an attempt to make a miracle happen. Head coach J.B. Bickerstaff’s concern stemmed from the 19 turnovers his group committed; he referred to it as going for home-run plays instead of hitting singles. Reading between the lines, nine of those miscues were courtesy of Sexton and Darius Garland.

So yeah, the cleverly-named Sexland has a desire to knock the ball out of the park instead of settling for a base hit, if we’re sticking with that analogy. Why wouldn’t they? Hero ball is something they’ve been accustomed to for much of their basketball lives.

Hell, Sexton’s gone 3-on-5 before and almost won a game, and we all saw him single-handedly knock off the Brooklyn Nets in double overtime recently. The world hasn’t seen much of him, but prior to his knee injury at Vanderbilt, Garland was a championship-winning superstar on the AAU circuit and at Brentwood Academy in Nashville before committing to the Commodores. It’s not like he hasn’t shown flashes of brilliance (Cleveland’s West Coast road trip last season comes to mind).

These are players in their early 20s that are finally experiencing some continuity and proper guidance. However, just because that aspect and the environment is healthy doesn’t mean they’re just going to forget everything they’ve done that’s worked in the past and “get it” immediately. So if the old saying is “becoming a team doesn’t happen overnight,” when does that happen?

“It takes a certain amount of success, to be honest with you,” Bickerstaff said Monday. “If you’re having one of these roller-coaster experiences, it’s hard to trust in [the team-building process] that it works, right? If you see it working at a consistent level, then it’s easier to buy into what exactly it is that we’re preaching and that teams may be preaching.

“It also takes some consistency in leadership, as well. Certain players, if they have multiple coaches over multiple parts of their early career who are telling them multiple different things and they’re running different systems, that can be even more difficult for young guys to adjust to and figure out what works and what to trust in. There’s a lot of things that go into it. In the perfect world, in a consistent place, that third year or fourth year is normally the year where you see that bump from guys. But again, I think there’s a lot that goes into creating a perfect world in our crazy NBA world.”

Wanted to get J.B. Bickerstaff's take on how long it typically takes for young players to unlearn what's worked for them in the past & begin to trust in the concept of team ball consistently, especially since they've seen it lead to success before. #Cavs @basketbllnews pic.twitter.com/0dCHGJ2nL5

Sexton and Garland are the base of Cleveland’s rebuild. As the roster has undergone an overhaul during each of the last three seasons, it has led to two more players that the franchise envisions as part of the long-term core: Isaac Okoro and Jarrett Allen. The latter is making his presence felt as an impactful, spry big at both ends of the floor. (Seriously, just pay attention to Allen’s instincts on the defensive end and how quick he makes screen reads on offense -- and look at his lone start next to Sexland).

In the midst of his fourth NBA season, the up-and-coming big man has a perspective that maybe the others don’t.

“I think it’s a mixture of experience and locking into the gameplan. As you play in the league more -- I’m only 22, I’m not a vet yet, I’m in a weird position, I’m a tweener -- as you get more experience, I feel you kinda understand the concepts more,” Allen said of striving towards collectively playing as one consistently. “For Darius and a lot of other people, it’s only been one, two or three years in the league. I think as we get more experience playing against higher-level teams, against different defenses and [running] different sets on offense, then we’re gonna bring it all together and we’re gonna start rolling.”

A 20-year-old rookie, Okoro is not quite as patient.

“I have to let myself know that [it’s a marathon, not a sprint] after every game. I’m a sore loser. I’m used to winning, so I’m a sore loser. Every time we lose a game, I’m always in my feelings. I always gotta remind myself. I mean, it’s the NBA. There’s 82/72 games, so there’s always gonna be another game. You can’t just let one game bring you down.”

Garland, too, is “annoyed” when he has to look at the big picture. He’s narrowed it down to one game at a time at least, and has been much better at taking care of the basketball and picking his spots since the loss at Minnesota. In fact, the second-year guard personally went to Bickerstaff that night and demanded better of himself and the team.

The Cavs responded on Monday with a bounceback win over the Wolves, a game that took a similar path in the fourth quarter with Minnesota coming back to trim Cleveland's lead. Except this time around, the wine-and-gold didn’t revert to bad habits or isolations; they stuck to their principles and didn’t falter.

“Not to sound cliche, but that’s passing the test for us,” Bickerstaff said of his team’s response Monday night. “We talk about each game being a test because it’s a different moment. And these scenarios with these same-team back-to-backs, especially in losses, present an opportunity for you to learn how to make an adjustment and do something different so that the outcome is different. Credit to our guys for passing the test.”

“As the season keeps going on -- it’s a lot of games that’s out there -- it’s a different game plan every game with different teams. We just have to find that balance in just trying to switch over between game to game,” Garland added. “That’s what I’m going through right now, trying to find that consistency -- different reads coming out of the ball screens, seeing how they’re gonna defend the ball screens, seeing how they’re defending Collin or Dre (Andre Drummond) or all our bigs. Just trying to find that balance in between either being aggressive and getting my teammates involved.”

Sexton, on the other hand, is always a glass-half-full type of person. As his teammates groan over their (understandably) incessant desire to have things all together at this very moment, Cleveland’s rising star is enjoying those games where the squad puts its true capabilities on display.

“It feels amazing to know where we want to be and what we look like when we are clicking on all cylinders [and] when we’re all playing together,” Sexton said. “I feel like it’s fun. It’s fun to be out there, no matter who’s scoring, who’s assisting, who’s playing defense, who’s locking up. When it’s like that [on our down nights], we’ve just gotta remember what it feels like to have fun. We can’t just go into each game stressed out and thinking, ‘Oh man, we’ve gotta make sure we’re doing everything right.’ At the end of the day, we’re gonna make mistakes. Things happen, but it’s pretty much how we adjust and how we figure out and bounce back from those mistakes.”

The Cavs may need to go to that well often in the near future, especially following a 21-point loss to the Los Angeles Clippers at home. Next up on their schedule, there’s a double-date with the Milwaukee Bucks in Cleveland before embarking on a grueling five-game West Coast swing featuring Western Conference playoff teams. It’s going to be another test, as Bickerstaff said.

As Sexton put bluntly in his article, Cleveland basketball is back on the map. Sending a message over the next couple of weeks with a few more signature performances as a team could make people believe his claim.

“That’s the good thing. We’re still learning and we’re still trying to build on that [consistency]. We can’t get satisfied with winning one game,” Sexton said. “We’ve gotta put multiple [together], even go through a stretch where we win about five in a row. We have to put games together. We can’t just go out and think one or two games, that’s good for us.