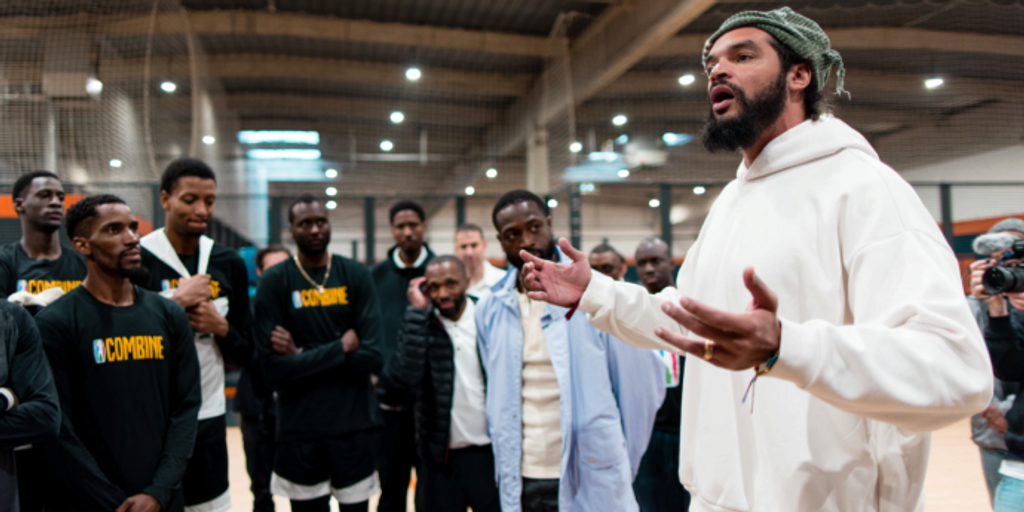 Fresh off the 2023 Basketball Africa League Combine and heading toward the NBA Paris Game between the Chicago Bulls and Detroit Pistons in France, retired 13-year basketball pro Joakim Noah is soaking up every second of the international scene.

With Noah on site for both, Basketball News had the chance to catch up with the longtime Bull and former national-champion Florida Gator to discuss the rise of the BAL, the Paris Game on Thursday, basketball expanding to a global stage and much more.

Being at the BAL Combine and seeing the momentum of the league going into its third season, what's the energy like there?

Joakim Noah: "Well, it's very special to be in Paris. This is a full-circle moment for me personally, and to be able to come to the Combine and to see the energy of the young men trying to get jobs and work in the BAL, I thought it was really special. Obviously, we're building a professional league and it's growing. To build something sustainable... to see the growth from year-to-year is really special, but also to see the energy of the kids who want to be a part of it. Kids who are from all around the world, and everybody, you can feel that the kids are just in really high spirits and want to be a part of it. This is obviously so much bigger than basketball, and everybody who was at the Combine felt that way."

There are many former players who are heavily invested in the BAL, including guys you've played with and against like Grant Hill, Dikembe Mutombo, Ian Mahinmi and Luol Deng to name a few. All of you coming together and contributing to this, how does that feel?

Noah: "I think the contributions of some of the players that were able to invest is great because it also changes our mindset. Because you know, we were raised as competitors and competition can be very divisive, and just to be able to be in a position to be able to grow and unite is special. Not everybody has an opportunity to have that, to be at the table with the big dogs and see how we can grow something from scratch is really special. And now that we have this platform, especially for African players, it's really powerful."

What is the ultimate goal for the league?

Noah: "I think just to have a really powerful league on the continent where African kids don't feel like they have to go anywhere to get paid off of basketball. The game is growing, it's the fastest growing sport in the world and a lot of the talent comes from the motherland. So just to be a part of this and to watch the growth and seeing it at the highest level, but also on a grassroot level, is what it's all about. And now, we're able to have those conversations at a table altogether and look at the big picture and see where the growth needs to happen.

"I mean, Africa's so big, so different culturally. I'm learning a lot, and I feel like not only am I involved in something that I know a little bit about — because basketball has been my whole life — but I feel like I found my purpose. And there's a lot to be proud of with that. I didn't grow up on the continent, I wasn't born on the continent, but this is my heritage, and I feel like a lot of people feel that way. I felt that at the Combine (Monday). It's like, people came from all around the world to be a part of this and the energy was that the people who were involved really understand that big picture, and just want to see this game grow. And it's bigger than them just playing and getting a check. A lot of the time with basketball, that's what it becomes, but with this opportunity, I think that people really feel the purpose and I'm proud to be a part of that."

You kind of mentioned it, but internationally, the game is becoming so popular and has a ton of momentum. Even in the NBA, you're seeing more of that at a rapid pace, as there were 58 European players and nine different players from France on opening night. We know that Victor Wembanyama is at the top of NBA Draft conversations. In general, the way basketball is growing across the world, why do you think it's happened so fast and is this going to continue in that trajectory?

Noah: "You know, I remember being in Paris and going to my first NBA game and seeing Michael Jordan play and the power of his influence all around the world. My father brought me to the game in Bercy. And 25 years later, the Bulls are coming to play in Paris again. The French players have had that kind of access. And now, the future of not just French basketball, but the future of basketball is this kid Wemby, who's an unbelievable talent. He grew up seeing a lot of winning, not just in basketball, but you think of France with winning the World Cup. He was raised and he saw what winning is all about and he knows that it's very possible.

"So when I was coming up, [Tariq] Abdul-Wahad was the only NBA player. And I remember seeing Tony Parker coming up at 15 years old playing at ABCD Camp and seeing the career that he had, that was my inspiration. And now, there's just a whole generation of French players and they're just taking it to the next level. But France is a country that has all the resources to be the best. They have everything. They have the coaching, they have the structures, they have the stadiums. They have everything. So you see the growth, and that's what we're trying to do in Africa. The structures aren't there yet, and we have to build it step-by-step."

You brought up the Paris game. The Bulls are going to be taking on the Detroit Pistons, and Killian Hayes is a French player who's found his stride this year. How special is it to play in your home country in such an event?

Noah: "Well I can't even imagine how he feels, but it's a beautiful story being able to play in front of your family and friends in your country. Nothing gets better than that. So it's gonna be really special for him. And just understanding that there's gonna be younger kids there watching him, and he's gonna be inspiring as well. So not only is it an unbelievable feeling to play on that court, but understanding every layup, every dunk, every opportunity that he gets on the court is inspiring for the next generation."

Going back to finding your purpose in working with the BAL, but on a broader subject, what has your transition to retirement been like? It sounds like you have a solid feel of what you're trying to accomplish post-career.

Noah: "Oh, a hundred percent. I think that everybody who's in this position, our careers are short. It's crazy to know that I won't be playing basketball anymore. It happens so fast. You have a dream from when you're a kid and not everybody gets to live out their dreams as players, and I was able to do that. I got to do it at the highest level, and I'm really proud of that. Now, I have my family. I just got married this summer, I have my kids. So I'm really happy, trying to find that balance of working and working on my purpose work and raising my family."

Do you still keep in touch with your college teammates like Al Horford who's still playing and Corey Brewer who's coaching in New Orleans and your old Bulls teammates?

Noah: "Oh of course. These are people that I shared some of the most special times of my life with. I love Corey. We just sat down not long ago. Obviously, I have strong relationships with everybody and was able to do a beautiful trip with Derrick [Rose] to Africa, where he brought the Simeon (Academy) kids to Senegal this summer. These are all trips, these are all moments that I'm really proud of the relationships that I build off the court. And I just want to keep building."

If there are any players in the NBA today that you have your eye on, who would you say stands out?

Noah: "I love Bol Bol. Bol Bol is probably my favorite player to watch right now. I love to see his growth. Obviously, his back story is unbelievable. His father was so much more than just a basketball player. And just to see him become the player that he is and you just see him... you're not used to seeing somebody who's that tall — 7-foot-2 African guy — with handles, with that kind of ability. It just shows how much the game has grown. I just love watching him play. He's just a really exciting player. I wish him nothing but the best."

More infomation regarding the BAL and the NBA Paris Game:

o   The investors’ and strategic partners’ expertise in a wide range of industries and established relationships with African businesses, governments and NGOs will help accelerate the NBA’s growth across the continent.

o   The funding will contribute to the growth of the BAL, help expand the NBA’s presence in priority African markets and Africa’s basketball ecosystem, and deepen the league’s engagement with players and fans through initiatives such as the launch of additional NBA Academies and social responsibility initiatives that improve the livelihoods of African youth and families.