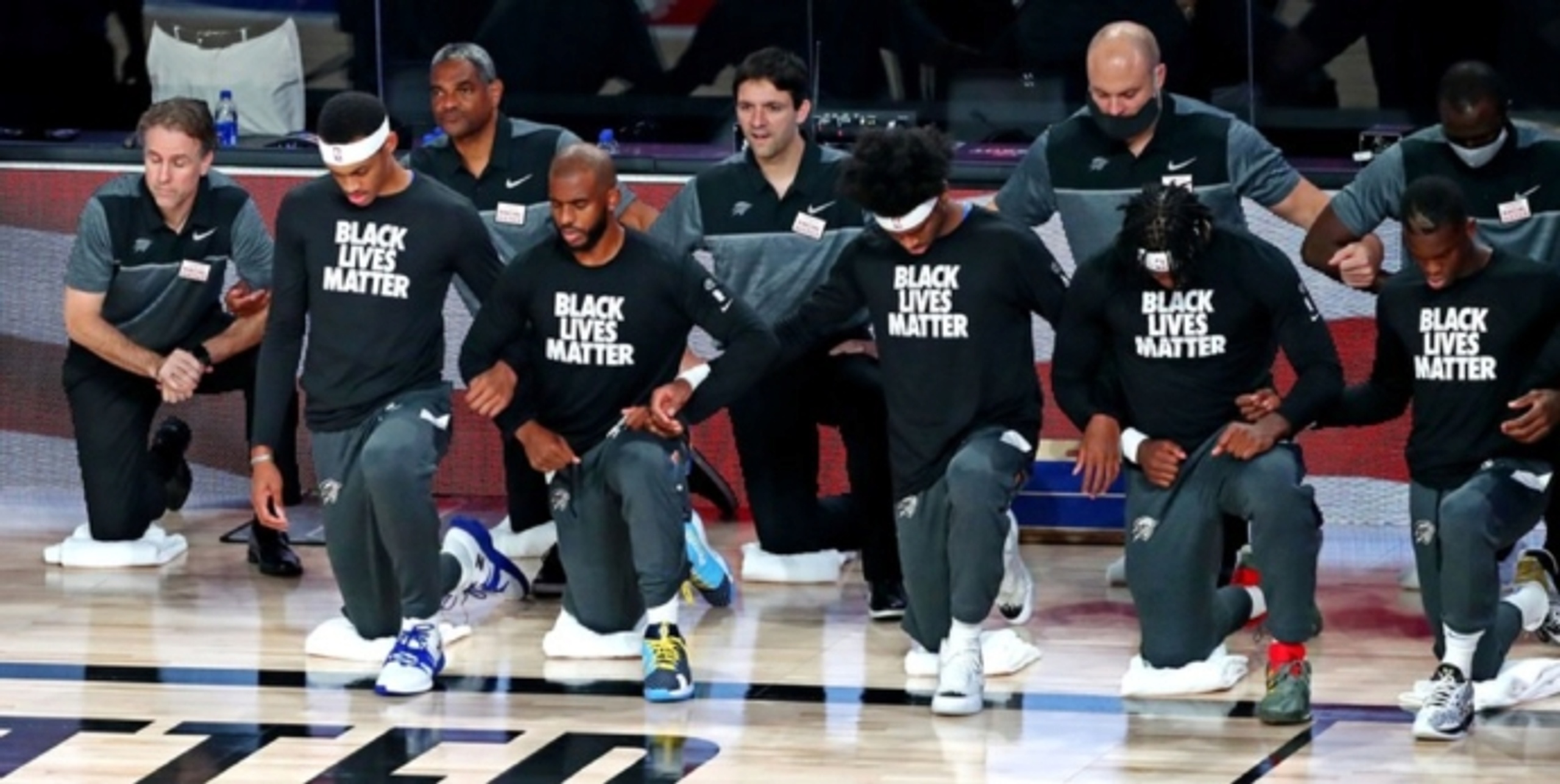 Jacob Blake is exactly why NBA players are kneeling

The Milwaukee Bucks recently decided to boycott Game 5 of their first-round playoff series against the Orlando Magic in response to the shooting of Jacob Blake. Blake, 29, was shot seven times by police in Kenosha, WI.

This comes exactly four years after Colin Kaepernick took a knee during the national anthem for the first time prior to a 49ers-Packers preseason game, showing just how much has changed in that span.

The NBA postponed all of Wednesday’s games and players met to discuss whether they should finish the postseason in the bubble. Ultimately, the players decided to resume the playoffs, with the NBA and NBPA coming together to create a social-reform coalition, turn many NBA arenas into voting locations and run ads during the playoff games that promote greater civic engagement.

Blake’s attorney, Benjamin Crump, posted a picture of Blake with his three sons (who were in the car when he was shot) on his Instagram page and wrote: “This is Jacob Blake. He is 29 years old and a devoted father. Kenosha, WI police shot him several times in the back tonight after he was breaking up a fight between two women. His THREE SONS were in the car he was getting into when they shot him!! His sons will be traumatized forever. As a father myself, I am horrified and disgusted. We cannot let this continue! We cannot let officers violate their duty to PROTECT us. Our children deserve better!!“

“So you’re telling me that there was no way to subdue that gentleman or detain him before the firing of guns? You’re lying to every African-American, every Black person in the community,” James said. "If you watch the video, there were multiple moments where - if they wanted to - they could’ve tackled him, they could’ve grabbed him, they could’ve done that. So why did it have to get to a point where we see the guns firing? His family is there. The kids are there. It’s in broad daylight.

"And if that video is not being taken by that person across the street, do we know if we even see that video? … We are scared as Black people in America. Black men, Black women, Black kids, we are terrified.”

“I just want to send my prayers out to Jacob Blake and his family,” Paul said. “We said we were going to continue to speak on the social injustice and the things that continue to happen to our people. It’s not right.”

Miraculously, Jacob somehow survived and is in stable condition, according to a statement from the family. However, make no mistake, the police (who are now on paid administrative leave) did not intend for him to leave there alive. Their aim was to kill him - right in front of his 3-year-old, 5-year-old and 8-year-old sons.

“Nobody’s more devastated than his three sons,” Crump told the Milwaukee Journal Sentinel. “You can only imagine the psychological problems these babies are going to have for the rest of their lives."

"As we fight for justice and understanding, our family has and will face many trials during this time," the Blake family wrote on their GoFundMe page. "Jacob Blake is a loving father of six that deserves proper medical attention and legal representation."

Why is the family and their attorney repeatedly stating that Jacob is a loving father of six and a good person? Because each and every time a Black man or Black woman is killed by the police, they are demonized and their name is dragged through the mud. This happened with George Floyd, Breonna Taylor, Sandra Bland, Terence Crutcher, Eric Garner, Philando Castile, Alton Sterling, Akai Gurley, Stephon Clark, Andrew Kearse and countless others. The media floods the airways with justifications of why the person was shot by the police and how it was somehow their fault.

A Black man shouldn’t have to be perfect or a college graduate or a husband or a father in order to explain why he didn’t deserve to be shot seven times in the back by police, but I digress.

This is exactly why NBA players have been kneeling during the national anthem. It’s why they have been wearing messages on the backs of their jerseys. It’s why they have collectively let their voices be heard during this entire NBA bubble restart, despite the barrage of criticism and vitriol they have received. It’s why there were questions about whether the players should go to the bubble at all.

Conservative political pundit Charlie Kirk tweeted: “Hilarious to see Black NBA players who make millions a year take a knee to try and tell us black people can’t succeed in America. Kick them out of the league. Done watching the NBA.”

Former NFL player, head coach and current commentator Mike Ditka told TMZ Sports: "If you can't respect our national anthem, get the hell out of the country. That's the way I feel. Of course, I'm old fashioned. So, I'm only going to say what I feel.”

How is it possible that so many people still don’t understand that this has nothing to do with the flag or veterans? Or are they simply dedicated to purposely misrepresenting and redirecting the issue?

Michael Vick spent more time in prison for killing dogs than just about every police officer who has killed an unarmed Black person over the past three decades, so it should be crystal clear what the issue is.

Joakim Noah recently appeared on my show, The Rematch, and explained why he chose to put “Justice” on the back of his NBA jersey while in the bubble.

“Because everyone deserves justice. Everybody does,” Noah said. “And the truth is that right now, and for a long time, there are a lot of people who don’t [receive justice]. I wanted to use that because everyone deserves human rights. All of my heroes have been fighting for justice. Some have died for justice... And I hope that a lot of these people who have died - when you think of [George] Floyd and Breonna Taylor - I really hope that they can get their justice.”

Joakim almost got emotional while saying these words. This isn’t just a trendy thing to support, as some have suggested; this means something to Noah and these players. It’s important for NBA players to take stances like this and verbalize to the media why this matters to them. We’ve heard Noah, LeBron James, Kawhi Leonard, Jerami Grant, Tobias Harris, Sterling Brown, C.J. McCollum, Donovan Mitchell, Marcus Smart, Kyle Kuzma and so many others discuss this. We’ve heard from coaches such as Doc Rivers and Alvin Gentry. It should be crystal clear what the issue is at this point.

What the NBA and WNBA have done this season can’t be overlooked: This is one of the largest collective athlete-activist movements since the 1960s. This movement has pushed entire industries to reckon with their racist history and institute programs and initiatives that weren’t previously there.

For example: The NBA recently announced that “all 30 NBA teams will contribute a combined $300 million over the next decade to fund the NBA Foundation, a new charitable initiative dedicated to greater economic empowerment in the Black community.”

NBA Coaches For Racial Justice was established by Lloyd Pierce and now every coach in the NBA is working with grassroots organizations in their respective cities.

Former head coach and current analyst Stan Van Gundy explained the kneeling for those who still seem to be confused on the meaning and importance of the players’ stance.

“If you love something, you want it to be better,” Van Gundy said on my show, The Rematch. “As a parent, you’re going to love your kid no matter what. But you’re not going to just let them do whatever they want to do and not say anything or do anything - because if you really love your kids, you want them to be the best that they can be. And when they’re not doing that, you want to try to correct their course. That’s what the players are doing. They’re not saying, ‘I don’t want to live here,’ or, ‘I hate America.’ They’re saying, ‘I want it to be the best that it can be.’”

NBA players took a respectful stand - not against police, but against police brutality. And they did it together, as an entire league. Coaches, referees, staff, white players, foreign players - everyone taking a stand together while utilizing the media to bring further attention to specific cases of police brutality and calling for police accountability (such as justice for Breonna Taylor and George Floyd).

With the horrifying shooting of Jacob Blake and the fact that none of the police officers had body cams - although Kenosha technically requires them for all of their officers - some players feel that kneeling isn’t enough anymore. And as was the case with George Floyd, if it weren’t for a civilian‘s recording, the “facts” from the police report almost certainly wouldn’t have resulted in any officer being held accountable.

It is more than evident that we still have a long way to go.

This is the official GoFundMe created for Jacob Blake and his family. They need our support.