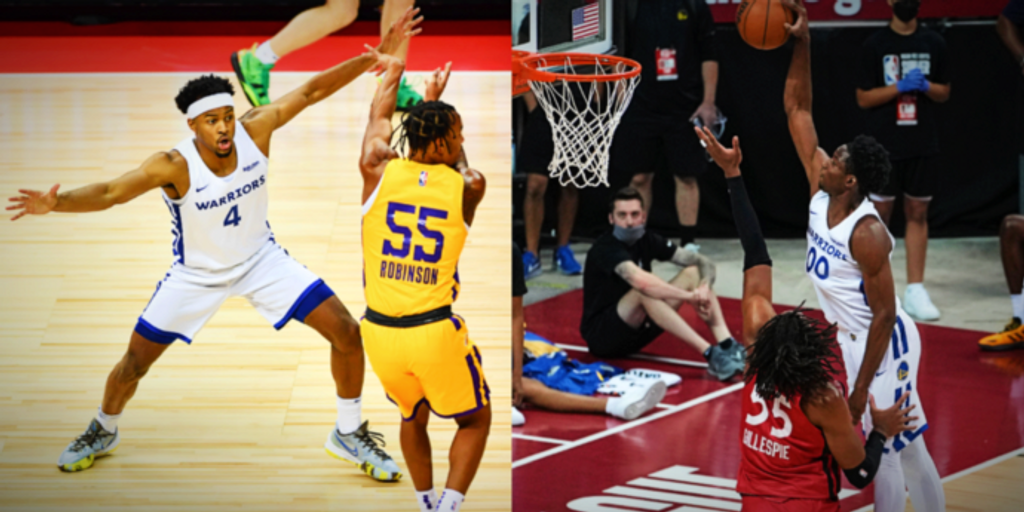 Moses Moody, Jonathan Kuminga can benefit from patience with Warriors

When you’re an NBA lottery pick, chances are you likely aren’t going to be told to wait your turn. There’s a reason you were chosen in the draft as high as you were, as most teams that missed out on the playoffs would bring you in to address an immediate need and bolster their roster.

Oddly enough for Jonathan Kuminga and Moses Moody, they’re exceptions to the rule.

Taken at No. 7 and No. 14 overall (respectively) by the Golden State Warriors, who had an extra first-round pick thanks to the Andrew Wiggins-D’Angelo Russell trade, the two rookies will probably not play a significant role from the jump in the Bay Area. It’s not only because they might not be ready quite yet, but also because of the free agents that Bob Myers’ front office acquired.

The Warriors added Otto Porter Jr. and Nemanja Bjelica to the mix, and will welcome Andre Iguodala back for the first time since the team last appeared in the NBA Finals. And while those three were 2021 summer signings, we can’t forget that Klay Thompson is set to return to action following back-to-back devastating injuries. This is a group that will be right back in the playoff picture if all goes according to plan.

So where does that leave the lottery guys? Unlike a good portion of their draft classmates, Moody and Kuminga probably won’t consistently be in Steve Kerr’s rotation this year. Golden State’s vets will groom them into pro’s pros because that’s what this franchise does; however, expecting them to contribute to a win-now situation this quickly in a limited, fluid role would be a difficult ask.

With that being said, it doesn’t mean we can’t be excited about what they can become with the proper development, and NBA Summer League gave us some glimpses of the lottery duo working together.

"I feel like we had a pretty good 1-2 punch going on,” Moody told reporters after his first game in Vegas. “That's my guy.”

Warriors summer league head coach Kris Weems also helms the team’s G League affiliate Santa Cruz and actually coached against Kuminga when he was with the Ignite. Between seeing that talent and seeing Moody dominate as Arkansas’ best player, Weems recognizes both are confident in their abilities.

"I like them playing together. I think they already have a trust level coming in as [first-round lottery] draft picks,” Weems said. “They've been counted on with their previous teams. Now, I need them to play on and off the ball.

“I was telling them in the locker room, I said, 'Look, as a role player and somebody trying to figure out their spot next to Steph [Curry], Klay [Thompson], [Draymond Green], whoever it is — you're not gonna have the ball.' So just understand what it means to play 0.5, you have to make a decision in half a second. But then, also be ready to shoot, be ready to pass, be ready to take threes and make a play for somebody."

Weems further explained how he could help Moody and Kuminga find a balance between wanting to contribute and win, and understanding it’ll take time to nail down a niche for each player.

"The message is always: you can't do it by yourself,” Weems said. “As long as you share the ball with your teammates on the offensive end... everybody runs and plays and screens and cuts harder when they get a chance to touch the ball. So just keep that in mind and stay connected on offense.  And then defensively, that's trust. That's communication, that's knowing that your brother's gonna be there for you; then, finishing those possessions with rebounds, and then the transition from defense to offense is something that our young guys are gonna figure out really quickly. That's what makes the Warriors a really good team.”

"I mean we're competitors, so anytime you step between those lines, winning is the main focus,” Moody said. “Development is another thing that's on your mind, but it's all about winning."

The pair of rooks ended up making quite the mark. Among rookies in summer league scoring, Kuminga (17.3 points per game) and Moody (17.0) finished seventh and eighth, respectively. The way they went about getting those opportunities? Totally different.

“He does what he needs to do, gets to the cup, finishes around the rim,” Moody said of Kuminga. “And I'm gonna knock down those shots. So we play well off each other."

In a recent BasketballNews.com roundtable, I had to pick Kuminga as my standout in Vegas:

Though there were a number of young players who looked ready for the big stage, it’s hard not to salivate over what Jonathan Kuminga can become. With the right development and a perfect situation among champions in Golden State, it’s looking like he’ll be a force to be reckoned with down the line. The jump shot is inconsistent and he comes off as a little overaggressive and reckless right now — particularly when running the floor — but the dribble moves he put on in isolation situations were eye-popping, as were his speed and strength when he finished at the rim. The 18-year-old forward has plenty of upside to be excited about. It just may take a little time before he puts it all together, and that’s okay.

Looking at Moody, he’s got a quick trigger. His catch-and-shoot prowess and understanding of the need to push the ball up the floor are going to perfectly fit the Golden State mold. In five games of summer league action, he shot just a hair under 39% from beyond the arc. He has potential of getting into that in-between area and pulling up as well.

Defensively, the InStat metrics look outstanding. Moody only allowed 0.6 points per possession each guarding against pick-and-roll handlers and shooters on the catch. Though there were only six isolations he defended, he allowed just one point in those scenarios, too.

Weems was short and sweet when discussing Kuminga’s defensive abilities, relaying that he likes the 6-foot-8, 220-pounder matched up “pretty much against anybody.” As for Moody, Weems went into a little more detail.

“I think the game is moving fast for him,” Weems said after the team’s second summer league contest. “And it's not that he's not capable, but the guys are just bigger, stronger, faster, so you have to be thinking the game a little bit faster, and I think he can do that. He's a smart player, he'll figure things out. The more important thing is where's the physicality on the glass, using your length in the passing lanes and we've gotta finish possessions."

Making the transition to the pros differs for every rookie. How quickly guys pick concepts up while adjusting to the pace and spacing, and the schedule in general, depends on the situation. Kuminga might be ahead of the curve in terms of the off-floor aspect due to his experience with the Ignite, whereas Moody understands that it’ll be a change of pace.

“It's really just me trying to prepare — get in those actions, get in those game-time, late-game situations — so I know what to do when it's time, when it's really there...That's what the summer league is about. Preparing, getting in the atmosphere to really be who you need to be when the season starts.”

Believe it or not, training camp is right around the corner. Moody and Kuminga assuredly will be learning from the best when that time comes.