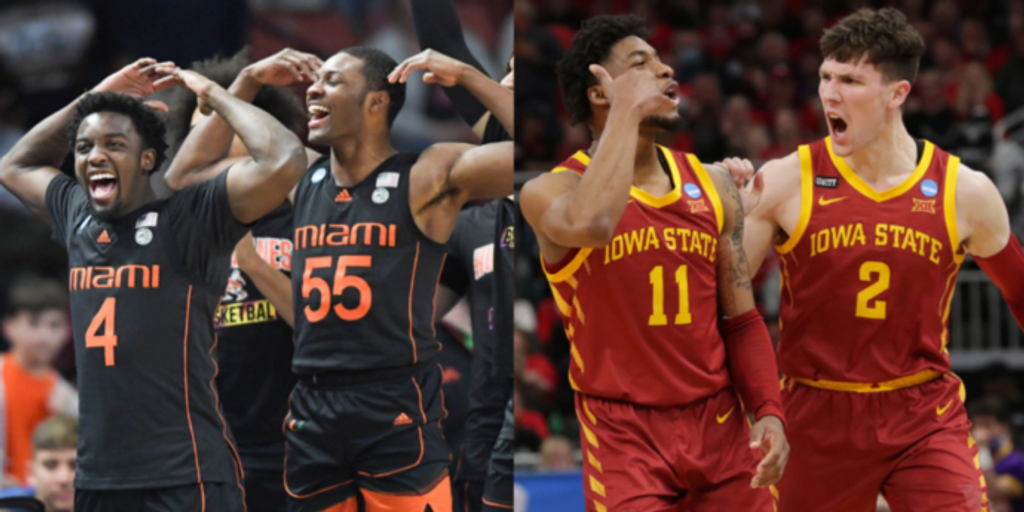 With respect to Juwan Howard and the University of Michigan men’s basketball team, the second- and third-best upsets of the Men’s NCAA Tournament in the Round of 32 — after Saint Peter’s stunning Murray State — came at the hands of the No. 10 Miami Hurricanes and No. 11 Iowa State Cyclones.

In the Midwest Regional, we already saw a classic 12/5 upset in the opening round, featuring Atlantic-10 champion Richmond outlasting Big Ten champion Iowa 67-63 on Thursday. Miami got by USC 68-66 in a 10/7 win on Friday, as did 11-seeded Iowa State in beating No. 6 LSU in a 59-54 victory.

But on Sunday after, Iowa State shut down the third-seeded University of Wisconsin Badgers in Milwaukee 54-49. The stunner was followed by Miami blowing out No. 2 Auburn and expected top-three NBA Draft pick Jabari Smith 79-61 later that evening.

This sets the stage for a seemingly improbable Sweet 16 matchup between two double-digit seeds, which has only happened four other times in the tournament’s history.

In 1997, No. 10 seed Providence — led by God Shammgod — beat No. 14 Chattanooga 71-65, or as the Washington Post put it, “GOT HELP FROM GOD.” Other notable players on Providence then? Longtime Indiana Pacer forward Austin Croshere and subsequent Big East scoring champion Jamel Thomas. You may also remember the latter from Through The Fire, the Sebastian Telfair documentary from 2005.

Both VCU and Syracuse lost in the national semifinals in 2011 and 2016, respectively.

(Back when putting mainstream music in highlights was acceptable.)

Additionally, there have been 15 double-digit-seeded teams to crack the Elite Eight, according to the NCAA Tournament's Wiki. (Oh, come on. I don’t use them for much, but don’t act like they didn’t get you through college, too!)

This Miami-Iowa State matchup obviously guarantees that at least one double-digit seed will advance to the Elite Eight.

This Miami team has experienced some distinct highs of any squad left in the tournament this season, considering its standing as a No. 10 seed. After an inconsistent 4-3 start to their season, the Hurricanes won nine straight games from Dec. 1 through Jan. 8, highlighted by a win over then-second-ranked Duke at Cameron Indoor, 76-74, capping a 5-0 start to ACC play.

Additionally, they Kimbo Sliced the North Carolina Tar Heels in the face 10 days later with an 85-57 victory, which was sandwiched in between two one-point losses to Florida State, who isn’t in any postseason this year. Again, inconsistency from The U.

Most notably, the Canes have one of the oldest teams in all of Division I. Due to COVID's effect on college sports seasons, Miami players were subsequently offered an extra year of eligibility without consequence, and have taken advantage of it. The Canes have an average age of 21.38, making them the oldest bunch in the ACC and ninth in all of Division I. Kameron McGusty, Charlie Moore and Sam Waardenberg are 3 of Miami’s 5 leading scorers, and all of them are sixth-year seniors.

Though McGusty leads the Canes in scoring with 17.5 points per game — and was the team’s lone All-ACC First-Team selection — junior guard Isaiah Wong has been the team’s breakout star in the tournament. Wong, who entered the 2021 NBA Draft before returning to school, dropped 22 points on 7 of 12 shooting against USC; he followed it up with 21 points on 8 of 18 shooting in the win over Auburn while also pulling down 6 rebounds. Between the two games, the 2022 All-ACC Third-Teamer has made 13 of his 14 attempts from the free-throw line.

Iowa State is 304th in points per game, but 20th in fewest points allowed. So, if the Cyclones have their way, they’ll be looking to ground the Canes, who are 77th in points and 35th in Offensive Rating out of 358 D-I programs. The Cyclones were ranked as high as No. 8 earlier this season, and were in the top-25 for nine straight weeks from December through February — largely thanks to a 12-0 start. Iowa State's big wins this season included upsets over No. 25 Xavier and No. 9 Memphis in November, both while unranked.

Former Penn State and St. Bonaventure guard Izaiah Brockington arrived to Iowa State following last season, and won Big 12 Newcomer of the Year and All-Big 12 First Team for his efforts. The 6-foot-4, 200-pound Brockington is the Cyclones' leading scorer and rebounder at 17.1 points and 6.8 rebounds per contest. The 6-foot freshman Tyrese Hunter became a constant presence in the Iowa State backcourt, averaging 10.9 points and 4.9 assists en route to Big 12 Rookie of the Year honors.

Hunter and Brockington combined for 42 of the Cyclones' 59 points in Round 1.

Additionally, the Cyclones have senior guard Gabe Kalscheur, who is averaging 9.5 points per game this season. Kalscheur exploded for 22 points on 10 of 19 shooting in ISU's win over Wisconsin.

The winner between Miami and Iowa State on Friday night will face the winner of Kansas and Providence this coming Sunday night, which could potentially give us yet another double-digit seed in the Final Four.

We'll see if one of these teams can continue an improbable run through the weekend.