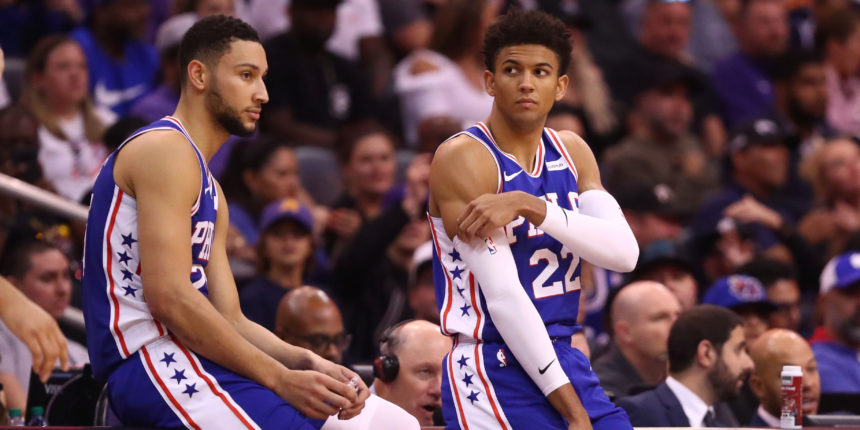 Entering the 2021-22 NBA season, all eyes are on Ben Simmons and the Philadelphia 76ers.

A break-up has seemed inevitable for quite some time, especially once Simmons struggled mightily in last year’s playoffs and the Sixers were surprisingly eliminated by the Atlanta Hawks in the Eastern Conference Semifinals.

During the seven-game series, Simmons was extremely passive – particularly in crunch time. Simmons took just three shots across his 56 fourth-quarter minutes, even passing up a wide-open dunk in Game 7 that would’ve tied the contest with 3:30 remaining. Afterward, Joel Embiid described that moment as “the turning point” of the game.

Why did Simmons seem scared to have the ball in his hands? Probably because he didn’t want to get fouled. After all, he shot 25-of-73 (34.2%) from the charity stripe during the postseason – the worst free-throw percentage in NBA-playoff history (among players with 70 attempts). When teams intentionally fouled Simmons, he didn’t make them pay. Instead, he clanked shot after shot, which forced Doc Rivers to bench the Defensive Player of the Year runner-up.

“When Ben makes them, we get to leave him in. When he doesn’t, we can’t,” Rivers explained. “That’s just the way it is.”

Like Embiid, Rivers didn’t hold back when discussing Simmons’ performance. After a reporter asked whether Simmons can be the point guard for a championship team, the head coach responded: “I don't know the answer to that question right now.”

Some people felt that Embiid and Rivers shouldn’t have thrown Simmons under the bus publicly, while others felt their comments were completely warranted. Either way, these quotes certainly didn’t help the already-strained relationship.

The latest twist in the Simmons drama came last week when the 25-year-old officially requested a trade and informed the Sixers that he won’t attend training camp (even if the team fines him).

This is currently the biggest story in the basketball world and for good reason: Simmons is not only a three-time All-Star and one of the league’s best defenders, but he’s also extremely polarizing. This has led to endless debate about Simmons’ future, his upside, potential trades and more.

Now, fellow NBA players are even getting in on this discussion.

Sixers guard Matisse Thybulle recently joined former NBA sharpshooter JJ Redick on his “The Old Man and the Three” podcast, and they discussed a wide variety of topics. The Simmons saga came up, of course.

Here’s a transcript of their candid back-and-forth:

JJ Redick: "Do you think that the Sixers – and I'm not going to single anyone out – but do you think the Sixers could have handled the end of last postseason a little better? It seemed, from the outside, that Ben was kind of thrown under the bus."

Matisse Thybulle: "Yeah... There's a lot to be said. To the last point you just made, he was thrown under the bus. You asked me [earlier] if I've been booed or had people mad at me: I made the foul that lost us the last game and I received almost no [backlash]. There was a little bit on Twitter, but the Ben hate was so much louder."

JJ Redick: "It had been growing though."

Matisse Thybulle: "But just to build the frame of reference: I lost us the game, which lost us the series, and nobody really spoke about it. They wanted to talk about [Ben] passing up the dunk and passing it to me more than my foul. Anyways, I think both sides played a decent role in it. Neither side has really helped themselves throughout this situation. Whoever started it [or] whoever made it worse... at this point, it doesn't really matter. [Both] sides have played a pretty decent role in the situation that we find ourselves in now. On a human level, as his teammate and as a friend, you hate to see people put in this situation that's so heavily covered by the media. Because people lose sight of the human aspect of us athletes, especially during controversial times; we're looked at as a commodity. I don't even know exactly what people consider us in these moments, but it's not as humans. On a personal level, I really do feel for him because this would suck for anybody."

JJ Redick: "I typically don't agree with the 'both sides' claim, but I would say... I'm friends with Ben and had him as a teammate and loved him as a teammate, but he probably could do more to help himself – especially [when it comes to] ingratiating himself with certain people. But I also think it's one of those things that comes with playing here [in Philadelphia] and comes with being a max player. I guess my problem with the entire situation –  and this is where I'm going to defend Ben a little bit and I've said this on the podcast before – [is this]: I feel like at times, people just can't appreciate Ben for who he is as a player. Like, we can't appreciate Ben's greatness for Ben's greatness. And that's not to say he's blameless in any of this, but we haven't gotten to the point where [we say], 'Ben is a great player and here is what he's great at; let's just appreciate that.' We want to nitpick the things that he doesn't do (and that we all want him to do), and I don't think that's fair to Ben. Again, Ben is not blameless, but I don't think that's been fair to Ben."

Tommy Alter: “Some of the stuff Ben does defensively is on a different level than anybody else in the league. I’m curious, how much have you learned from him [on that end]?”

Matisse Thybulle: "He's one of the examples of [dominating with] his physical ability. His ability to just flip a switch and lock down an entire court is like nothing that I've ever seen. 'Cause he's 6-foot-10 and runs like a gazelle! I've watched him pin Luka [Doncic] to the halfcourt line, and that's not [easy] - Luka is a big dude and he's a very skilled guard, that's unheard of! He's done things that you could never teach to anyone. They are things that you can't even develop over the course of your career. He has the ability to do things that a lot of players will never be able to do."

It remains to be seen what will happen next in the Simmons saga, but we should get some more information when Philadelphia’s training camp tips off on Tuesday, Sept. 28.