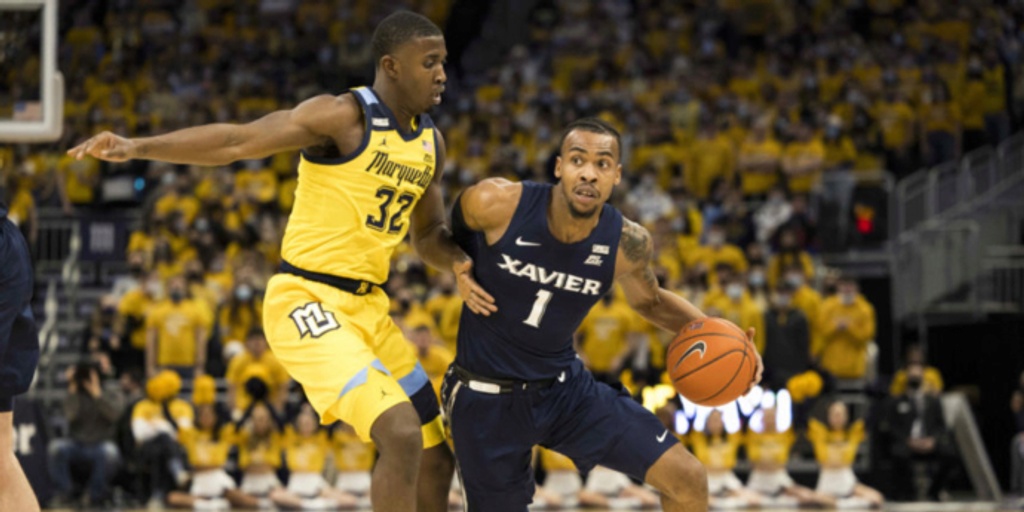 The Golden Eagles (14-6, 6-3 Big East) seem to be hitting their stride. They entered the game on a five-game winning streak, including three against ranked opponents. Potential 2022 NBA draft pick Justin Lewis leads the team in scoring at 15.6 points per game, followed by senior Darryl Morsell at 13.6 points.

Xavier (14-4, 4-3 Big East) entered the contest ranked No. 20 in the nation. The team averages 75.1 points per game behind a well-rounded offensive attack. Upperclassmen Jack Nunge, Nate Johnson and Paul Scruggs lead the way. The Musketeers defeated Marquette in their previous meeting this season, 80-71.

Lewis led all scorers in a tremendous showing, posting 20 points, 13 rebounds and 2 assists. He is currently in the top-50 on our 2022 NBA Draft Big Board — at 6-foot-7, he's a powerful player and solid athlete who is capable of scoring inside and out. Although still inconsistent, he is improving as a shooter and giving promise to his potential as a stretch four at the NBA level. He excels as a rebounder and defender, using his physicality and footwork to switch and defend multiple positions.

Both teams started well with a balanced offensive attack. At the 10-minute mark Xavier held a 14-13 lead, but then Lewis and Morsell hit some timely shots to build a nine point lead for Marquette. Xavier made a late push and was able to cut the lead by halftime, trailing only 33-29.

At the break, Lewis led all scorers with 13 points on 3 of 4 shooting from behind the arc.

Xavier’s Adam Kunkel posted 10 points at the break, while leaders Scruggs, Johnson and Colby Jones had combined for only 11 points.

The second half started with the teams trading buckets and leads for ten minutes. Jones and Morsell led the charge. Both of the big, physical guards came out aggressive and were able to get to the free throw line. Xavier junior Zach Freemantle remained in foul trouble, which forced the Musketeers into a smaller lineup, but the experienced backcourt held tough.

At the end of the day, the Morsell, Lewis and Oso Ighodaro were just too much to handle on the inside. Morsell finished with 19 points, 7 assists and 2 steals. Freshman Kam Jones provided 12 points and 2 steals for Marquette. Xavier’s leading scorers were Scruggs with 13, while Kunkel and Jones each had 12.

Marquette moves to the fifth spot in the conference standings. Xavier slides to sixth.

Xavier will host No. 12 Providence on Wednesday afternoon.