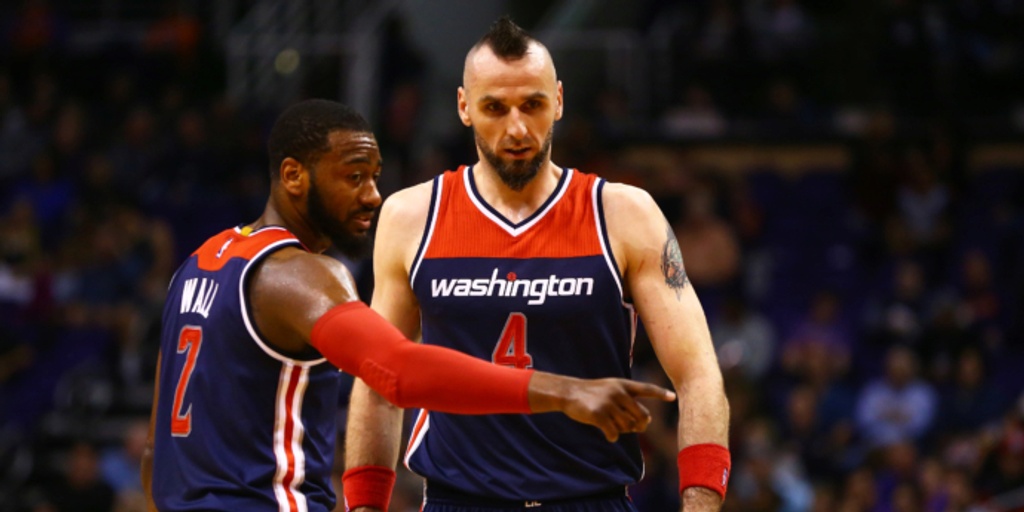 “At one point in time, I thought about committing suicide,” Wall admitted. “I mean, just tearing my Achilles, my mom being sick, my mom passing, my grandma passing a year later — all of this in the midst of COVID at the same time… me going to the chemotherapy and sitting there, seeing my mom take her last breath, wearing the same clothes for three days straight and laying on the couch beside her. My team, the mother of my kids has been great, my two boys, it's my motivation for me. Looking at all that, I'm like, 'If I can get through this, I can get through anything in life.'

"Everybody goes through something, we all went through tough times, nobody's got it easy. But I don't think a lot of people could get through what I went through. To me, to be back on top where I want to be and see that the fans still want me to play, having support from my hometown, their support means a lot in a time where I had to go find a therapist.

"A lot of people think, 'I don't need help, I can get through it,' but you gotta be true to yourself, find out what's best for you, and I did that. I'm just happy to have this opportunity to play basketball again. I think everything I have been through has all been a part of God's plan… Even though I was in a dark place the last couple of years, I'm super excited... to play the game that I love."

This admission sent shock waves throughout the entire sports world.

I reached out to former Washington Wizards center Marcin Gortat, who played with Wall for five seasons, to have a discussion about his former teammate.

Etan Thomas: What were your thoughts when you heard John Wall’s interview detailing everything he has been through?

Marcin Gortat: “First of all, I was shocked. I didn’t know that he was going through so many different issues. I was a witness a couple years ago while we were teammates and there was this little 6-year-old girl, Miyah Telemaque-Nelson, who he had really connected with who passed away from cancer. He had been raising money for her and doing charity work for her, and I remember the big impact her death had on him. He literally broke down during a postgame interview where he dedicated the game to her.”

Thomas: Yeah, I remember seeing that video. He really took that hard.

Gortat: “Even harder than most people know. He was really down for a couple of weeks after that. So when I heard that he lost his mom and then his grandmother, I thought back to how hard he took [it] when little Miyah passed away. After hearing this past interview, I felt bad. Like as a former teammate, I should’ve been supporting [him] more. Yeah, I texted with him a couple of times while he was in Houston. I knew he was struggling with the situation as far as the team and them pushing him to the side, so I knew that alone was catastrophic for him because I know how much he loves basketball. But couple that with losing people as close to you as your mother and grandmother [and that] had to have been just devastating.”

Thomas: He mentioned that he has a positive outlook now and feels optimistic with his new situation with the Los Angeles Clippers, so that was good to hear.

Gortat: “Yeah, I’m hoping that basketball will be something that can help him since he seems to be in a much better situation with the Clippers so that will occupy his mind and his emotions somewhat, but I really hope he heals and gets all of the support toward his healing.”

Thomas: I definitely agree. One of the things that bothers me is when I hear different fans or people on social media or in the sports media reporting on rumors that are just inaccurate. They cast a negative light on an athlete based on these rumors. Stephen A. Smith publicly apologized to John for his role in demonizing him last season in Houston. I was glad to see him do that because the media really went after John Wall and swayed public opinion on him in a very cruel and uninformed way.

Gortat: “Yeah and that’s very unfortunate that that happens a lot in the media nowadays, but this is how it is in this league. A lot of people owe John Wall an apology. I understand the media has to write something or say something on their shows that’s controversial and that gets all of the people’s attention because that’s what they are paid to do. But people who know John know that they were unfairly demonizing him. Not that he’s perfect, nobody is perfect. Did he make mistakes? Yes, but everybody makes mistakes. But he is not the person they were making him out to be, and it’s terrible how much that happens.”

Thomas: I had a debate with David Aldridge and Marc Spears about the power of the media. Marc came out publicly and said that he regretted doing the interview, but I was trying to explain to them the power that the media has to sway public opinion, and how the media should be held accountable when they talk recklessly. And they just weren’t willing to accept that the media has that kind of power. But this is a prime example. It’s good that Stephen A. publicly apologized, but hopefully that changes the way he and many others in the media target players and demonize them because it happens too often. Just here with the Wizards, I saw it happen with Kwame Brown and with Chris Webber after he got traded (back when they were the Bullets). It really happens way too much.

Gortat: “I definitely agree. So let me say, as someone who played with John Wall for many years: When he is healthy, he is one of the best point guards in the league — hands down. The guy is a beast. I don’t know what Houston was doing with him. That was completely absurd. Here you have a guy of his caliber and you have him sitting at home? Not even on the bench, but at home? I can’t imagine how he felt going through that for [an entire] season? And to have these prominent people in the media vilifying him while he is going through all of this, as he’s dealing with injury after injury and losing his loved ones?”

Thomas: Yeah, I don’t care if anyone says there wasn’t any cruel or malicious intent behind their reporting — that doesn’t mean that it wasn’t still cruel and malicious.

Gortat: “Exactly! Many people think athletes are like robots — like video game characters who just perform, and that’s not true. We are human beings with emotions and we go through tragedies and hardships in life, but are still expected to push all that to the side and perform at the highest level every night. I remember seven or eight years ago when DeMar DeRozan was in Toronto and he was going through depression and he said that he was going to the games, but he wasn’t really thinking about the games because he was dealing with so much personally.

“The NBA is getting better at helping players now when they are going through tragedies, but we still have a long way to go. I remember my fourth year and definitely my fifth year playing in Washington — specifically when things with me and John were not the best — there was a lot that I was dealing with and I didn’t have too much help. But honestly, it wasn’t a concern. Many people just wanted me to perform and push my personal life to the side, and sometimes that’s hard to do.”

Thomas: “I can definitely attest to that. I lost my grandmother, who I was really close with, while I was playing with the Wizards. And I remember our trainer, Eric Waters, trying to rush me back and I was like, “Can you give me a minute please?” When I came back, that’s when I had the first issue with Brendan Haywood. Normally, I would’ve ignored him throwing tantrums over not getting enough playing time, but that day just wasn’t the day, so I flipped on him. The team actually formed a human barricade and escorted him out of the locker room. Then, everyone — Ernie Grunfeld, Eric Waters, Coach Eddie Jordan — was like, “What’s wrong? Why did you get so upset?”  And I was like, “I told y’all I needed a minute!”

Gortat: “Yeah, and my issues with John kind of formed in a similar way, to be honest — because I was holding so much in and suppressing what I was going through and reacting to different things on the court like not getting the ball as much as I wanted to or us losing games I felt we should’ve won. Interesting, I didn’t know that’s what started y’all’s issues.

“Let me tell you this quick story. I went to Cleveland and I was on this stupid streak of 250 or 280 or something games [in a row] without missing a game, so I was playing like three seasons straight. And all of a sudden in December, my mom had a stroke. I got the message while I was in Cleveland and I was shocked. I broke down crying. They had found my mom after like a day-and-a-half, laying at home unconscious; my friend found her. So when I came back to the locker room that morning, I was there physically but I wasn’t really there. But John and Brad [Beal] were the first people who said, ‘Give him some space, let him go deal with what’s going on with his family because that’s bigger than basketball and he has our support.’ So, Coach [Randy] Wittman came down and told me, ‘Go to Poland, don’t worry about the team for now.’

“That meant a lot to me. They knew what I was going through. And when you’re so close to a teammate, you feel their pain. And in turn, I know how close John was with his mom. He talked about her all the time. When we finally sat down and squashed our issues, we had a real ‘kumbaya moment.’ We talked about all of our personal struggles, all that we were dealing with and had been dealing with. We cleared the air and connected on a whole ‘nother level as teammates, and it was exactly what we needed. So, hearing last week that my teammate contemplated suicide was devastating. Yeah, we had our issues in the past, but none of that matters now. I am cheering for John and want him to be successful both on and off the court.”

Thomas: I’m glad we did this interview, to have us — two former Wizards — encourage our brotha. You know, once a Wizard, always a Wizard. I really want to see him do well too. I was already rooting for him to really have a new beginning with the Clippers and shine like the old John Wall, but now I’m rooting for him times 1,000.

Gortat: “I couldn’t agree with you more! I wanna see John demolish every other point guard in the league. Just go on a tear. I remember seeing him battle every game — Kyrie Irving, Derrick Rose, Chris Paul — and people forget how good he was, how fast he was end to end, how explosive he was. John was special, and I want to see him get back to that. But more importantly, I want him to heal because he has literally gone through hell over these last years.”