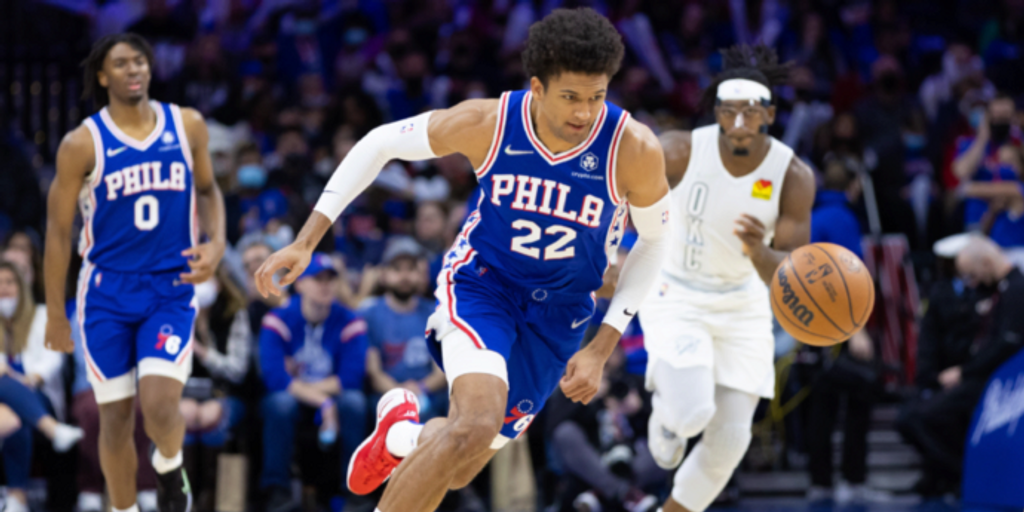 Haven't you heard? The Philadelphia 76ers are running roughshod over the NBA.

They're 3-0 since James Harden's debut, with a pair of wins over the New York Knicks and an opening dub against the Minnesota Timberwolves.

Quibble about the competition level if you'd like, but the early returns are hard to ignore. Harden's on-ball brilliance has made life easier for his Cameroonian pal — and the inverse is true — while also slotting Tyrese Maxey and Tobias Harris into beat-the-tilted-defense roles.

The wildcard has always been Matisse Thybulle. He's earned his keep as a defensive menace — a jumpy lad with the ability to teleport whenever a pass or shot attempt is near. But he's been a ghastly offensive player throughout his career. He doesn't run ball-screens and isn't an isolation or post threat, and his perimeter shooting has given enemies the leeway to Tony Allen him off the ball.

The push-and-pull of his minutes — we need that defense, but good lord does he give opposing defenses an easy help outlet — has been, and is a story to track with the Sixers. Luckily, the early returns have been good on that too.

Thybulle is averaging 9.7 points during the Harden era, a modest number until you realize that the 29 points he's scored in this stretch is the second-best three-game mark of his season.

He's drilled nearly 38% of his threes (3 of 8), which is cool, but not nearly enough to shift how defenses refuse to guard him. What I've appreciated during this small sample, is how he's made himself useful — or if we want to give ol' Glenn credit, how the Sixers have used Thybulle — beyond three-point shooting.

Thybulle is doing his own work as a cutter. Whether it's 45 cuts from the slot, darts from the corner or roaming around the dunker spot (subscribe!), Thybulle has made defenses pay for diverting their attention elsewhere.

(Brief aside: I remain on the hill that cutting is a form of shot creation. It requires a read, it requires timing, it requires spatial awareness. I get that it takes two — which is why on-ball creation is more valuable — but there's something to be said about seeing space for the taking and, well, taking it.)

The real funky stuff is what Thybulle has done as a screener. Teams have toggled between hiding weak defenders or elite off-ball guys (wings or bigs) on Thybulle in an act of safety (weaker defenders) or cruelty (using elite roamers to muck up actions elsewhere).

To the former point, Thybulle's willingness to screen — and growing comfort as a roller or slip artist — is becoming a weapon. Harden has no trouble calling Thybulle into the fray to force a switch; Thybulle is beginning to learn the cadence of slipping in case the defense cracks.

In terms of set pieces, the Sixers have been shredding teams with Chicago action — a pindown that flows into a handoff. If you want to get even more granular, they've been going with a variation of Chicago action — expertly dubbed "Delay Turn Chicago" by Gibson Pyper (@HalfCourtHoops) — to get the Harden/Embiid two-man game going.

Thybulle is the "Turn" piece in this action, as his abrupt flip-and-screen kicks off the set.

It's been three games, and it's a small sample, but the Sixers are scoring 1.88 points per possession on trips featuring a Thybulle screen per Second Spectrum. The Sixers also have a 128.6 Offensive Rating with the Harden-Embiid-Thybulle trio on the floor, per PBP Stats.

Yes, you read those numbers correctly.

As long as Thybulle can make lemonade (effective screens, timely cuts) out of his lemons (poor shooting, lack of ball skills), he'll slot in just nicely in this offense. And if he can find a role on offense, he'll definitely make his money on the defensive end.