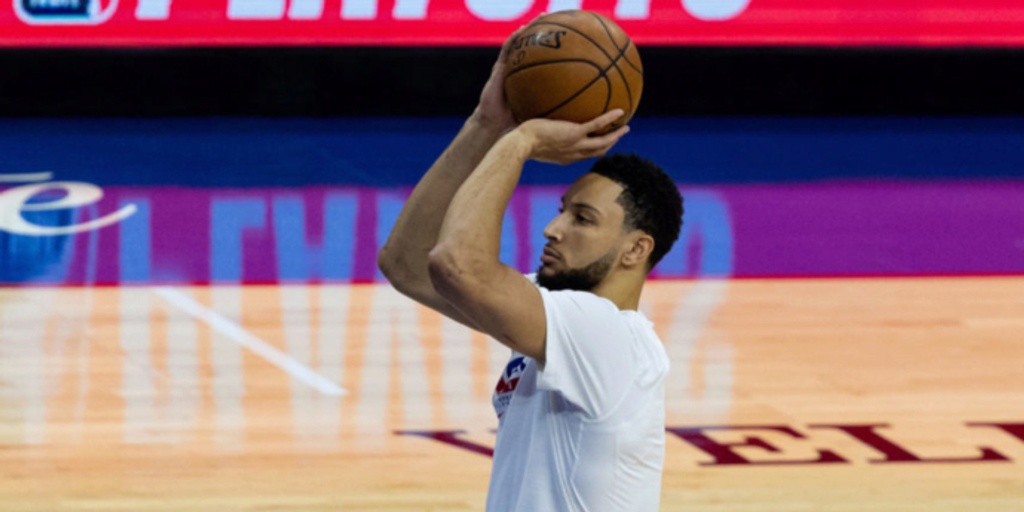 Lest we forget, Ben Simmons is a great basketball player

After roughly six months of relative silence, Ben Simmons spoke with the media on Tuesday afternoon during his introductory press conference in Brooklyn, following the trade that sent him from the Sixers to the Nets.

"I feel physically pretty good," Simmons told reporters. "Mentally, I'm getting there, so it's an ongoing thing to stay on top of that. But I think I'm heading in the right direction."

Simmons said he had been staying in shape by doing Pilates, playing pickup games and lifting weights with his trainers.

Simmons didn't provide much in the way of specifics when asked about what led to the deterioration of his relationship with the Sixers organization.

"It piled up, a bunch of things, over the years where I knew I wasn't myself, and I had to get back to that place of being myself and being happy as a person and taking care of my well-being," Simmons explained. "That was the major thing for me. It wasn't about the basketball, it wasn't about the money, anything like that. I want to be who I am and get back to playing basketball at that level and being myself.

"There's just a lot of things internally that happened over time, and it just got to a place where I don't think it was good for me mentally, so it is what it is... [I'm] moving forward."

If we are looking ahead and projecting how he will fit in alongside his new teammates, it's important to remember just how impactful Simmons can be when he steps onto a basketball court.

Simmons was named the NBA's Rookie of the Year in 2017-18 after becoming just the second player in NBA history (along with Oscar Robertson in 1960-61) to average more than eight rebounds and eight assists in his first full season.

Simmons also excelled in the playoffs in 2018. In the first postseason series of his career, he led the Sixers past the Miami Heat and into the second round by averaging 18.2 points, 10.6 rebounds, 9.0 assists and 2.4 steals (while shooting over 70% from the free-throw stripe).

In his sophomore season, Simmons averaged a career-high 16.9 points (on 56.3% shooting) to go along with 8.8 rebounds and 7.7 dimes. The only other players to average more than 16 points (while shooting above 50% from the floor), 8.0 boards and 7.0 assists over an entire NBA season are former MVPs: Wilt Chamberlain, LeBron James, Nikola Jokic, Magic Johnson, Oscar Robertson and Larry Bird.

In 2019-20, Simmons authored arguably his finest all-around campaign, earning a spot on the All-Defensive First Team and All-NBA Third Team after shooting a career-high 58% from the field and leading the league in steals (becoming the first Sixer to do so since Allen Iverson in 2002-03). Simmons became the only player in NBA history to average at least 16.0 points, 8.0 assists, 7.0 rebounds, 2.0 steals and a field goal percentage above 57%. He also led the league in defensive loose balls recovered and ranked third in deflections.

Last season, Simmons' counting stats declined a bit due to a dip in playing time, but he still stuffed the stat sheet and dominated the defensive end of the floor. He was named to the All-Defense First Team for a second-straight year and was one of just two players, along with Rudy Gobert, to be a unanimous selection. Simmons would finish second to Gobert in Defensive Player of the Year voting. Simmons' Sixers finished the year with the league's second-best defensive rating, one spot ahead of Utah.

It's also important to note that Simmons was just 24 years old at the end of the 2020-21 campaign. Per Basketball-Reference, he is one of only seven players to tally at least 4,000 career points, 2,000 boards and 2,000 dimes before celebrating their 25th birthday: the other six are Giannis Antetokounmpo, LeBron James, Magic Johnson, Tracy McGrady, Oscar Robertson and Kobe Bryant. (Magic and the Big O are the only two to reach those milestones in fewer games.)

Yes, his tenure with the 76ers ended awfully, culminating in a brutally bad playoff loss to Atlanta, but let's not forget just how well Simmons played during his four years in Philly.

Does he have flaws that he needs to address? Absolutely, with the issues at the free-throw stripe being the biggest problem.

Yet, although Simmons has been a subpar shooter and dreadful free-thrower for most of his career, he has still been a great basketball player. The numbers detailed above prove that point.

Furthermore, there is no denying that Simmons positively impacted his team. He plays winning basketball, which is reflected by the Sixers' success.

For context, consider this: In the four years before Simmons arrived in Philadelphia, from 2013-14 through 2016-17, the Sixers lost more games than any team in the NBA, posting a pitiful 75-253 record (.228 winning percentage).

Philly hadn't won a playoff game in five years prior to Simmons' rookie season. They won 19 postseason contests and three series over his four years.

Of course, Joel Embiid and others deserve a ton of credit as well, as Simmons obviously wasn't solely responsible for the Sixers' turnaround. Still, Ben's impact on both ends of the floor was undeniably enormous.

Speaking with reporters on Tuesday, Simmons said he doesn't "have a date yet" for when he plans to make his Nets debut, but that he is "starting to ramp it up" and getting close to game shape. He also stated he hopes to be ready to play by March 10, when Brooklyn visits the City of Brotherly Love for a matchup against his former squad.

When asked about sharing the court with Kevin Durant and Kyrie Irving, Simmons replied, "I think it's going to be scary having those guys running alongside me, multiple different weapons on the floor. And I think at the pace we want to play at, it's going to be unreal."

On Tuesday, Simmons spoke specifically about running and pushing the pace with Brooklyn. Nets fans have to be excited envisioning how he'll immediately improve the Nets' fast-break offense. Dating back to 2017, Simmons leads the league in assists per game in transition, averaging over 2.5 per contest.

Defensively, Simmons brings incredible versatility to the table. He is one of the very few players in the league who can cover quick point guards on the perimeter and burly power forwards on the block.

And playing alongside two of the greatest offensive players of this generation in Durant and Irving will allow Simmons to focus primarily on the defensive end.

So, while nearly all the commotion and controversy surrounding Simmons over the last six months has focused on his flaws, let's not forget the kid can play.