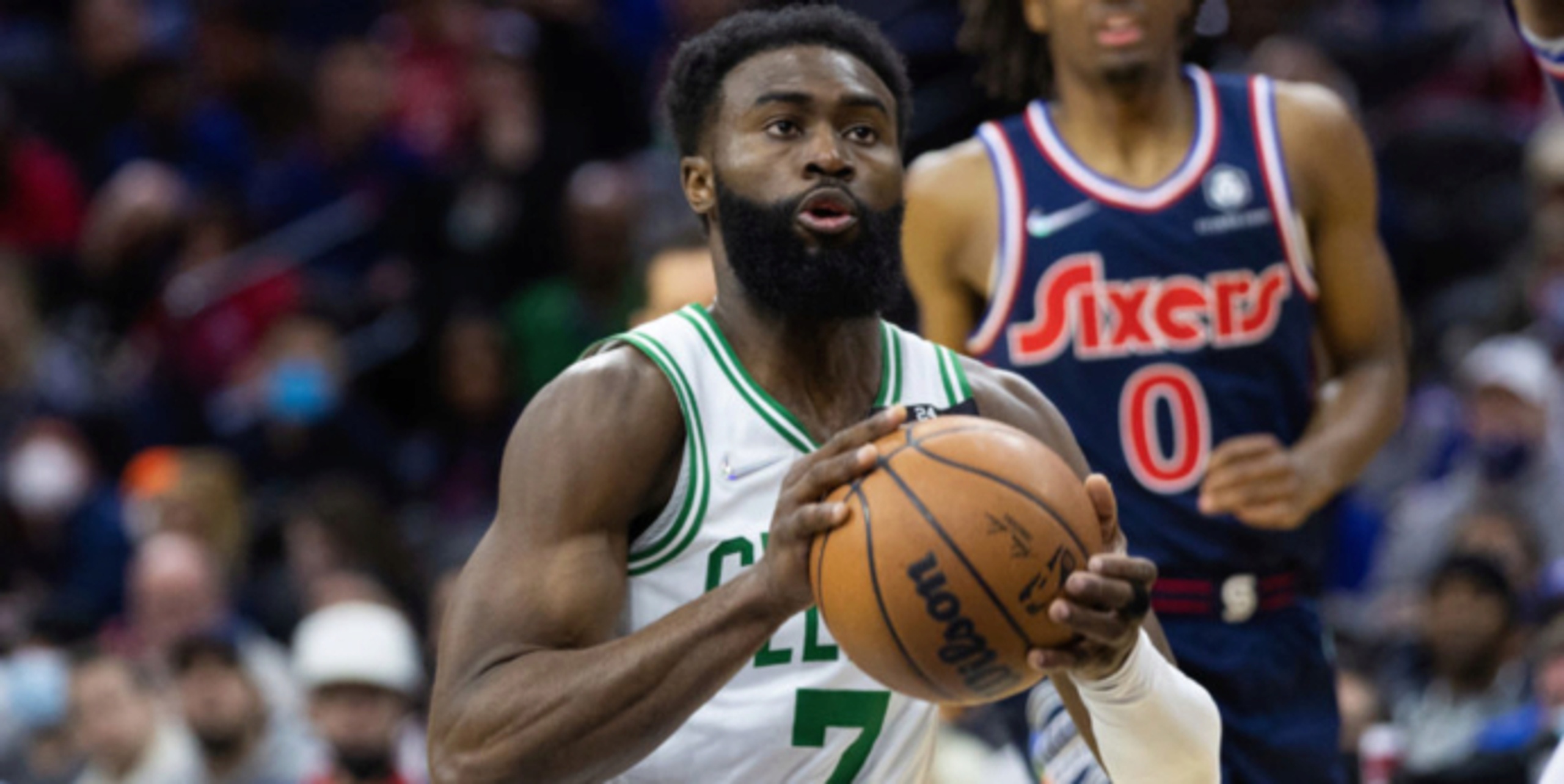 PHILADELPHIA (AP) — Jaylen Brown scored 26 of his 29 points in the first half and the Boston Celtics won their ninth in a row, dominating the Philadelphia 76ers 135-87 on Tuesday night.

Jayson Tatum added 28 points, 12 rebounds and six assists for the Celtics, who have closed ground in the Eastern Conference with their stellar play of late. Boston entered sixth in the East, four-and-a-half back of first-place Miami. They have won 11 of 12.

The margin of victory was the largest by the Celtics over Philadelphia in a rivalry that has been played 457 times. Boston’s previous biggest win was a 124-87 drubbing of Philadelphia on Dec. 20, 1987.

Joel Embiid had 19 points and nine rebounds for the 76ers. The NBA’s leading scorer entering the contest averaging 29.5 points. Embiid had his string of games with at least 25 points end at 31 in a row.

James Harden made his first appearance in Philadelphia — but in street clothes. The recently acquired star continues to recover from a hamstring injury. Harden is expected to make his 76ers debut on Feb. 25 at Minnesota.

Earlier Tuesday, Philadelphia introduced Harden at a press conference at the team’s training center in Camden, New Jersey, following last week’s blockbuster trade that sent disgruntled guard Ben Simmons to the Brooklyn Nets. Harden drew a loud ovation when he came onto the court unannounced during pregame warmups, and the arena erupted when he rang the ceremonial Liberty Bell prior to the home introductions.

The 76ers sure could’ve used the 10-time All-Star, three-time scoring champ and former MVP during the game. His first in-person look at his new teammates came in their worst game of the season.

The Celtics did little wrong to start while making 22 of 39 first-half shots and silencing the previously frenzied crowd. Brown made all five of his 3-point attempts and Tatum added 16 at the break.

The 76ers got a little life on Embiid’s jumper that pulled them within 58-41 with 2:26 left before halftime, resulting in a Celtics timeout and Harden — dressed in cut-up jeans and a long pink blazer with yellow sleeves — raising both arms to implore the crowd to get loud.

But Boston closed the half by scoring 11 of the final 12 points, capped by Brown’s 3-pointer at the buzzer that had him dancing back to the locker room and the Celtics ahead 69-42.

The Celtics led by as many as 51 in a second half that featured booing from the dissatisfied home fans.

Celtics: Marcus Smart limped off the court after getting hurt on a drive to the basket with 5:15 left in the second quarter. He appeared to injure his right ankle by stepping on Embiid’s foot and didn’t put any pressure on the ankle while being helped back to the bench. He stayed in the game briefly to shoot the free throws, missing both, before heading to the locker room and not returning. … Robert Williams III (right calf tightness) didn’t play. Williams entered Tuesday averaging 10.0 points and a team-best 9.7 rebounds. He’ll be evaluated on Wednesday to determine his status for the night’s game versus Detroit.

76ers: Embiid again played with a bandage wrapped around his right wrist. He has had his wrist heavily wrapped following Philadelphia’s last two contests, though he downplayed the injury. … Harden missed his final four games with the Nets due to the hamstring injury and hasn’t played in any of the three contests since the 76ers acquired him on Feb. 10, although he did participate in practice on Monday and Tuesday. He’ll also sit out Thursday’s game at Milwaukee.

76ers: Shot 28.7% (23 of 80) from the field. … Philadelphia’s previous largest margin of defeat this season was a 35-point loss at Utah on Nov. 10. Embiid wasn’t in the lineup for that game, and their worst loss with their star big man before Tuesday was a 22-point home defeat to the Jazz on Dec. 9. … Veteran Paul Millsap, also part of the deal that brought Harden to Philadelphia, started the fourth quarter and finished with nine points.

76ers: At Milwaukee on Thursday night.