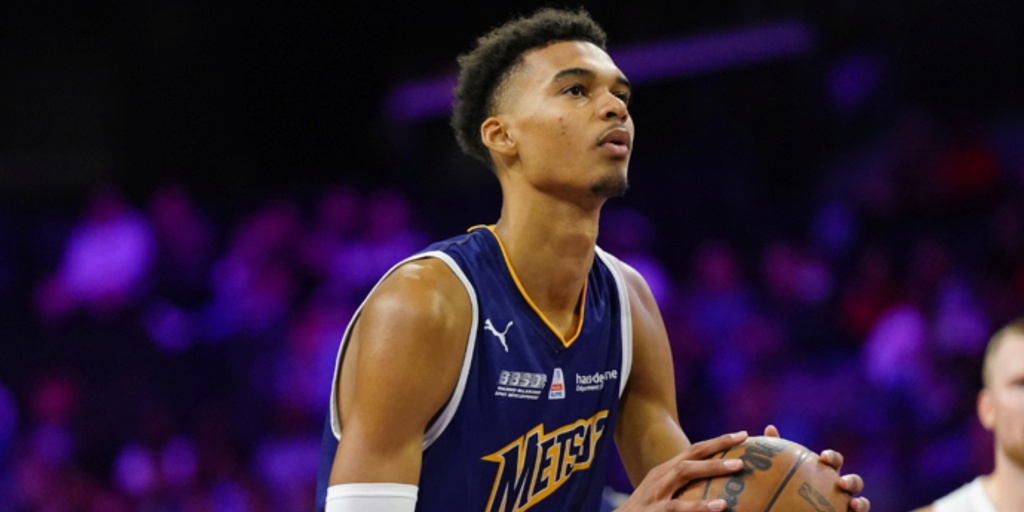 LeBron: Victor Wembanyama is 'a generational talent' and 'like an alien'

All eyes were on top prospects Victor Wembanyama and Scoot Henderson on Wednesday night as they squared off in Nevada, and the phenoms didn't disappoint.

Wembanyama finished with 37 points (on 11-for-20 shooting), 7 three-pointers, 5 blocks and 4 rebounds, while Henderson had 28 points and 9 assists while leading the G League Ignite to victory. Wembanyama and Henderson are expected to be the No. 1 and No. 2 picks in the 2023 NBA Draft.

LeBron James watched the showdown, and he came away very impressed with Wembanyama.

"What do I think of him? Probably the same as everybody else thinks. Everybody is labeling [players] this 'unicorn' thing; everybody has been a 'unicorn' over the last couple years, but he's more like an alien," James told reporters. "I've never seen — no one has ever seen — anyone as tall as he is but as fluid as he is and as graceful as he is out on the floor. I mean, at 7-foot-4 or 7-foot-5 or 7-foot-3 or whatever the case may be, [with] his ability to put the ball on the floor, shoot step-back jumpers out of the post, step-back threes, catch-and-shoot threes, block shots — he's for sure a generational talent.

"Hopefully, he continues to stay healthy; that's what is most important for him personally. But you can tell he loves the game; he was smiling a lot while playing the game last night. I think those were the two best players in the [2023] draft on the floor last night, and they both did their thing. He's a big-time player, and Scoot is a big-time player as well."

Wembanyama has been on the NBA's radar for quite some time, and he's becoming one of the most hyped-up prospects in years. LeBron obviously knows a thing or two about being labeled the next big thing as a teenager and playing on national television at a young age.

When asked about his experience as a phenom compared to what Wembanyama is going through, James pointed out a big difference.

"For me, what I went through, I'll just [say]: Thank God I didn't have social media. That's all I can say," James told reporters. "I can't imagine how my life would've been different or what would've transpired with me on social media [as a high-schooler]. I'm happy I didn't have social media, and I'm happy that I was from a small town of Akron, Ohio. It definitely just kept me in a bunker and kept me locked in with the task at hand. As a 15-, 16- and 17-year-old kid, it made me lock in."