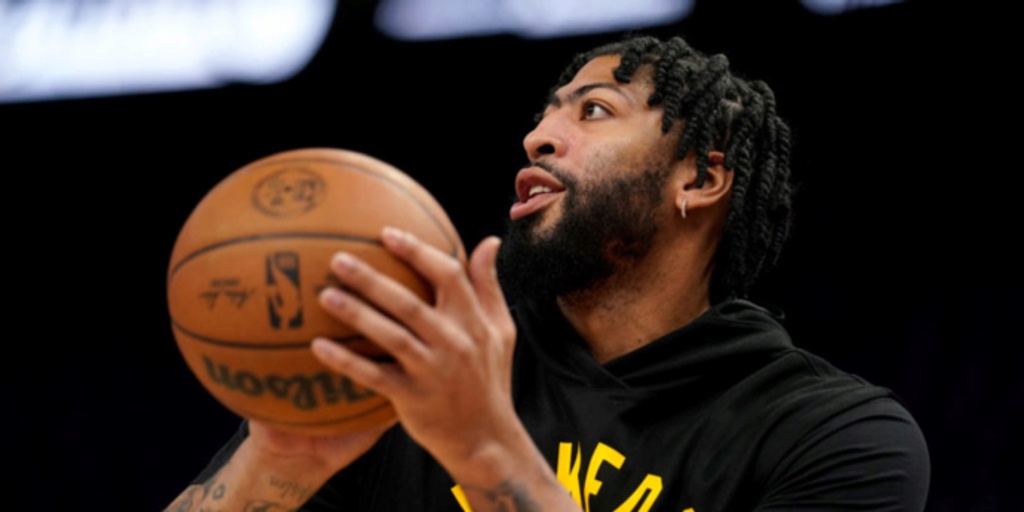 Los Angeles Lakers star Anthony Davis is making progress in his rehab from a foot sprain that has kept him sidelined for close to a month.

ESPN's Adrian Wojnarowski said Saturday on NBA Countdown that Davis – who has been sidelined since Feb. 16 – will be reevaluted later this week.

"His walking boot is off, and I’m told this week the next step for him is he’ll get on the court and start to do some stationary shooting," said Wojnarowski. "And they still, with 16 games left for the Lakers and the toughest schedule left in the league, the expectation is that they can still hang on to the play-in and get in the postseason and they can have Anthony Davis back.

“He’ll make more progress this week they hope, and he’ll have another MRI which will be about four weeks out from the injury, and the hope is that he can then start progressing towards returning before the postseason begins."
ANALYSIS: It has been a disasterous season for the Lakers, who are currently ninth in the Western Conference with a 29-37 record. The team could desperately use Davis, who has averaged 23.1 points, 9.7 rebounds and 2.9 assists this season.
MORE:
NBA News

Siakam scores 33 points, Raptors beat the Nuggets 127-115
Best Bets: BasketballNews' picks and fantasy advice for 3/13/22

Featured News

Warriors’ Green, others sacrifice minutes to boost backups
2h
Joel Embiid scores 47 as 76ers beat Nikola Jokic, Nuggets 126-119
14h
Aces to sign Candace Parker, though it's hard to be excited right now
18h
NBA Stats Notebook: What happens if you don't believe the stats?
yesterday
Analysis: Trying to play good NBA defense is a ‘wild, hot mess’
yesterday
Glimpses of brilliance: Magic rookie Paolo Banchero is on his A-game
yesterday
De'Aaron Fox early front-runner in NBA Clutch Player of the Year race
2 days
Analysis: It may be time to re-think NBA All-Star voting
2 days
Jayson Tatum weighs in on the NBA's wide-open MVP race
2 days
Top News
Oklahoma's rout of No. 2 Alabama one of many top-15 upsets on Saturday
2h
Achiuwa leads Raptors to 123-105 win over Trail Blazers
6h
Kyrie Irving has 32 points, Nets beat Knicks for 9th straight time
14h
DeMar DeRozan, Zach LaVine lead Bulls to 128-109 win over Magic
14h
Kawhi Leonard scores 32, Clippers beat Hawks for 5th straight win
14h
Joel Embiid scores 47 as 76ers beat Nikola Jokic, Nuggets 126-119
14h
Jaylen Brown forces OT, Celtics snap skid by beating Lakers 125-121
14h
Myles Turner, Pacers agree on two-year, $60 million extension
21h
Curry’s 35 points send Warriors past Raptors, 129-117
yesterday
Timberwolves top Memphis after moment of silence for Nichols
yesterday