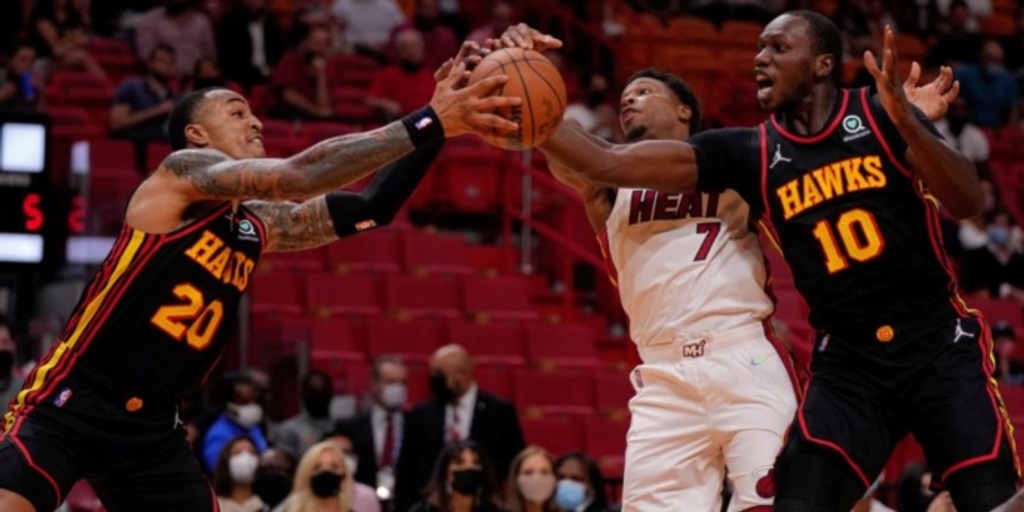 Much like NBA Summer League, preseason basketball is not meant for firm conclusions.

If anything, they're trial runs. Teams are trying to get their guys into shape, build on-court chemistry and experiment with lineups. But to roll with the summer league analogy, there are usually nuggets — small ones, but nuggets nonetheless — that you can hang onto within these exhibitions.

For young players, it may be a flash of a skill set. For veterans, particularly ones on new teams, you'll get the outline of what they're bringing to their new homes.

So no, you probably shouldn't start looking at Miami flight and hotel prices in preparation for a title parade based on the Heat's 125-99 victory over the Atlanta Hawks on Monday night.

(Look at those prices for other reasons that won't be detailed here. *Generic smile emoji*)

If there's a takeaway from the Heat side, however, it's that Kyle Lowry will absolutely change how the Heat do things — on both ends of the floor.

Lowry only played the first half of the game, mostly because things were out of hand by the time the second-quarter buzzer sounded. His line in 14 minutes of action: 5 points (1-of-4 shooting, 2-of-2 from the line) 4 rebounds, 7 assists (one turnover). The Heat outscored the Hawks by 10 points in Lowry's minutes, if you're into preseason plus-minus.

(You probably shouldn't be into preseason plus-minus.)

Here's another number that requires the "it's preseason" disclaimer, but is still noteworthy: the first-half pace of this game was 109.0, nearly 12 possessions faster than the Heat's 29th-ranked number (97.09) from last season.

As previously mentioned in this space, Lowry's ability to mash the accelerator was a much-needed shot in the arm for a Heat team that was stuck in the mud far too often. The Hawks helped juice the Heat's attack with a bevy of turnovers, but there was a level of intention from Lowry that should carry over into the games that matter.

Lowry's first bucket of the night came in transition. He was off the ball in this rep — newly-acquired PJ Tucker grabbed a board and pushed the break — but he was able to use Bam Adebayo as a lead blocker to flow into his patented early-clock, pull-up triple.

There were instances in which Lowry took matters into his own hands on the pace front. He grabbed three defensive rebounds in this game; they led to a Tyler Herro triple (miss) with 19 seconds on the shot clock, an Adebayo drawn foul with 14 on the clock and a Tucker triple (make) with 17 on the clock.

That's a rough average of eight seconds per possession after those defensive rebounds, over three full seconds faster than their average from last season, per tracking data at Inpredictable.

Even when Lowry wasn't the one to jumpstart the action with grab-and-go sequences, he made quick decisions after receiving outlets from others. The quick processing from Lowry benefited Adebayo, most notably getting him a pair of dunks on the break.

While Lowry's presence allowed the Heat to do more offensively (and do so more quickly), his presence defensively allowed them to do less.

Few teams switched at a higher rate than the Heat did last season. That's a luxury afforded to you by having an All-World big in Adebayo, but it also felt like the Heat had to switch to a certain extent. Screen navigation at the point of attack was an issue, with Goran Dragic and Kendrick Nunn taking turns falling behind twitchy ball-handlers in ball screens.

Switching was a way for the Heat to keep the ball in front, though it led to issues elsewhere; they ranked 19th in defensive-rebound rate after finishing No. 3 the year prior.

Lowry isn't the 2017 version of himself. He's easily a better defender than Dragic and Nunn though, even at this stage of his career. It was refreshing to see plays like this one.

Last season, that's likely a switch from Adebayo. A small, either Nunn or Dragic, would be on Gorgui Dieng until they were "scrammed" out of there by a larger teammate nearby. With Lowry, he's tasked with fighting over the screen. That allows Adebayo to stay in a drop, preventing a clear path for a roll and putting him in better position for a defensive rebound had Trae Young went up for the three-ball.

Lowry checked the boxes you wanted to see in his Heat debut. He improved the pace, generated open shots with his playmaking ability and helped the Heat maintain their base defensively. In other words, he made life easier for everyone around him.

It's almost like he's been doing it for a decade or something.