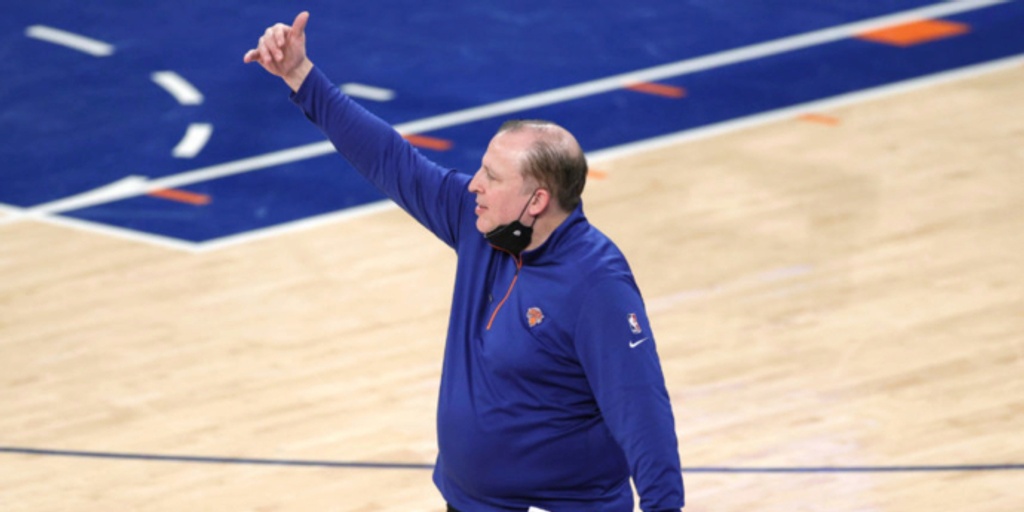 New York Knicks head coach Tom Thibodeau is the winner of the 2020-21 NBA Coach of the Year award, the league announced Monday night.

New York Knicks head coach Tom Thibodeau is the recipient of the Red Auerbach Trophy as the 2020-21 NBA Coach of the Year, the NBA announced today.

Thibodeau received 43 first-place votes and earned 351 total points to edge Phoenix head coach Monty Williams, who finished in second place with 340 points (45 first-place votes).  The 11-point difference between the first- and second-place finishers marks the smallest margin since the current NBA Coach of the Year voting format was introduced in the 2002-03 season.

With Thibodeau as head coach, New York finished tied for the fourth-best record in the Eastern Conference (41-31) and made the NBA Playoffs for the first time since the 2012-13 season.  The Knicks won 16 of their final 20 games to complete a turnaround from last season’s overall record of 21-45.

Thibodeau led New York to an 11-4 record in April for its winningest month since March 2014 (11-5).  He was selected as the NBA Eastern Conference Coach of the Month for May after guiding the Knicks to a 6-3 record in the final month of the regular season.

The Knicks showed dramatic improvement on defense with Thibodeau at the helm, leading the NBA in points allowed (104.7) and opponents’ field goal percentage (44.0) and ranking fourth in defensive rating (107.8).  Last season, New York finished 17th or lower in all three categories.

Under Thibodeau, Julius Randle was named an NBA All-Star for the first time and won the 2020-21 Kia NBA Most Improved Player Award.  In addition, Derrick Rose was a finalist for the 2020-21 Kia NBA Sixth Man Award, 2021 NBA Rising Stars selection RJ Barrett ranked as the fourth-leading scorer among second-year NBA players (17.6 ppg), and rookie Immanuel Quickley averaged 11.4 points after being selected by New York with the 25th overall pick in the 2020 NBA Draft.

New York hired Thibodeau as its head coach on July 30, 2020.  He has a career regular-season record of 393-277 (.587) in nine seasons as an NBA head coach, guiding teams to the playoffs seven times.  Before joining the Knicks, he served as head coach of the Bulls for five seasons (2010-15) and the Minnesota Timberwolves over three seasons (2016-19).

The NBA Coach of the Year Award trophy is named in honor of Naismith Memorial Basketball Hall of Famer Red Auerbach.  The legendary head coach guided the Celtics to nine NBA championships, including eight in a row from 1959-66.

The voting results for the 2020-21 NBA Coach of the Year Award are below.  The balloting was tabulated by the independent accounting firm Ernst & Young LLP.  Complete ballots for each voter will be posted at PR.NBA.com after the announcement of all end-of-season awards.

Below are the final votes for the Coach of the Year award: