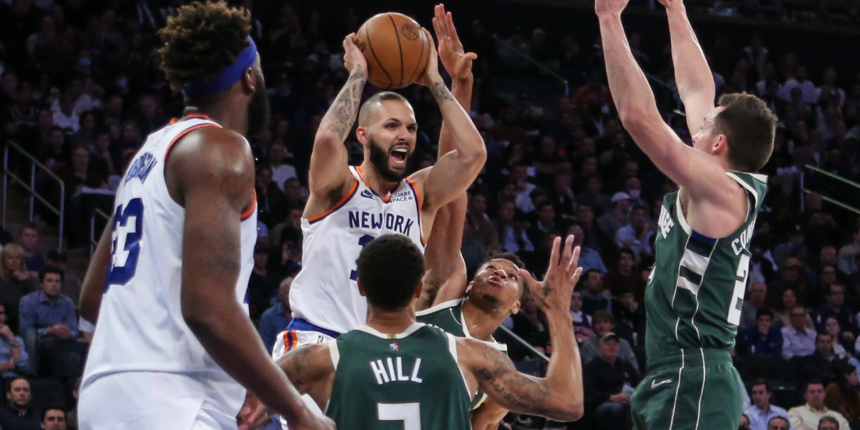 Madison Square Garden was rocking raucously in the fourth quarter Wednesday night. The issue is MSG was eerily quiet for the first three frames.

Playing a shorthanded Bucks team that was missing a pair of starters and had lost four of its previous six contests, the Knicks fell behind early Wednesday evening. New York's starting unit once again dug a deep hole in both the first and third quarters. In fact, with 15 minutes left in the contest, New York found itself down by a seemingly insurmountable 24 points.

That's when head coach Tom Thibodeau yanked his starters, hoping his reserves could provide a spark. And that they did.

However, the second unit ran out of gas down the stretch. Ultimately, New York allowed the Bucks to take and make too many uncontested 3-pointers, and Milwaukee ended up winning by double digits. This game highlighted two issues that plagued the Knicks all season and came back to bite them badly Wednesday night.

For starters (pun intended), the Knicks' first five have fallen behind consistently, dating back to the season opener last month. Kemba Walker, Evan Fournier, RJ Barrett, Julius Randle and Mitchell Robinson have been outscored by 64 points (or 15.6 points per 100 possessions) in the 205 minutes they have shared the floor together this season. Among all five-man units in the NBA, according to the league's tracking data, that's the worst cumulative plus/minus in the league.

This number is even more alarming when you contrast it with the Knicks bench production. The quintet of Quickley, Rose, Burks, Toppin, Gibson have outscored their opponents by 19.9 points per 100 possessions. Among all five-man units that have logged at least 50 minutes together this season, it's the most efficient and effective crew in the league.

The primary problem with the Knicks starting unit lies on the defensive end. New York's starting five has allowed opponents to shoot 47.9% from the floor, including 42.5% behind the arc, which is well above the league average. A common thread in Knick defeats this season has been New York's inability (or unwillingness) to defend the three-point line.

Coming into Wednesday, the Knicks had never allowed more than 22 three-pointers in a game in their franchise's history. The Bucks made 26.

If teams were knocking down contested triples against New York, it would be easier for Knicks fans to swallow, but that's not the case. On Wednesday night, per NBA tracking data, the Knicks allowed 30 wide-open three-pointers, meaning no Knick defender was within six feet of a Bucks player when they released their shot on 30 separate occasions.

And this was not a one-off occurrence. On the season, the Knicks have now allowed 270 wide-open three-point attempts. That's the highest number in the league by far, as every other team in the NBA has allowed fewer than 250 such attempts. Unsurprisingly, the Knicks have allowed 115 wide-open makes, or 20 more than any other NBA team. (In contrast, the Wizards, who have greatly exceeded expectations early on, have allowed just 41 wide-open makes on 125 attempts this season.)

Part of the issue is tied to Thibs' scheme defensively. Last night, for instance, New York made a concerted effort to wall off Giannis Antetokounmpo in the paint. And last season, New York ranked eighth in the NBA in wide-open treys allowed. Yet, the Knicks benefited from opponents shooting just 34.7% on those attempts in 2020-21, while the percentage has, as expected, progressed toward the mean in 2021-22.

Nonetheless, the reality is the Knicks allowed 17.5 wide-open attempts per game last season, and that number has skyrocketed to a league-worst 22.5 this season.

At this point, it's fair to question whether a lack of effort and intensity on behalf of the starters is at least partly to blame. The aforementioned Knicks' bench squad consisting of Rose, IQ, Burks, Toppin, Gibson have held opponents to below 39% shooting from the floor and just 26.5% shooting from downtown. Granted, it's a relatively small sample size (61 minutes), but those percentages could be viewed as an indictment of the starting five, especially considering the captain of the unit, D Rose, has never been viewed as an elite defender, and Gibson will celebrate his 37th birthday next year.

When asked after last night's loss about New York's defensive lapses, Rose asserted, "You've got to jump and contest. If you mess up, hard work and effort should make up for whatever mistake you made on the end of the ball with defense."

"I mean, it's the league," Rose said. "You're not going to make everybody miss, but as long as you give an effort, something should give."

History tells us that Thibodeau is extremely hesitant to make hasty decisions when it comes to adjusting his rotations. However, Thibs seemed to send out a warning shot to his troops after Wednesday night's defeat. "You know what they say," Thibodeau said when asked if his starter's struggles were due to their lack of playing time together as a unit. "When it's ten games, you say you need 20. When you get to 20, you say 30. And you get to 30, you say 40. And then before you know it, the season's over, so it's a bunch of bullsh-t."

Tom Thibodeau on the notion the Knicks' starters need at least 20 games to gel:

Another issue surely irking Thibs is his team's lack of success inside the friendly confines of Madison Square Garden. Since arriving in New York, Thibodeau has talked about the importance of establishing a significant homecourt advantage. Yet, through this season's first 11 games, the Knicks are 5-1 on the road and just 2-4 at home, including three consecutive losses by at least nine points.

The Knicks travel to Charlotte to take on the Hornets Friday night before returning to New York to play three straight games against the three teams with terrible records. Next Monday, New York takes on the Pacers (4-8), Wednesday they host the Magic (3-9) and Saturday they welcome the lowly Rockets (1-10) to MSG.

It will be fascinating to see where the Knicks stand next weekend, and if they've been able to address the glaring problems that have dragged them down since their hot start to the 2021-22 campaign.

All praise due to the Point God: Chris Paul is at it again
yesterday
MORE:
NBA News
Knicks

Stats Notebook: Kevin Durant on pace for his best offensive year ever
Nikola Vučević tests positive for COVID-19
