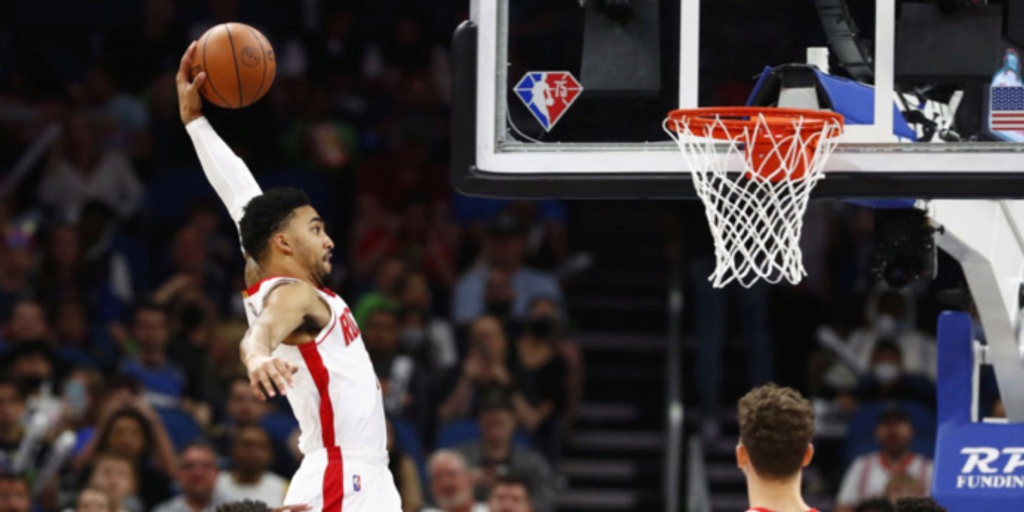 The NBA is built on star power, more so than perhaps any other sport. The seventh man on most teams has a larger following than some of the most marketable stars in other sports. Stars bend defenses, they isolate late in games when it's do-or-die time, and they're simultaneously the foundation and roof of a team's winning viability.

Much of what I've written about in regards to the youth development in the league this season has been tracking what's happening and why, pinpointing growth areas. I've always been pretty averse to projection, at least without much concrete backing; it's so finicky and I don't want to box in what someone can be.

Yet, throughout the season, I keep coming back to one player. Kenyon Martin Jr, has it.

He's played pretty well recently, averaging 11.7 points, 5.1 rebounds and 1.9 assists on 63.8% True-Shooting in March, but his future projection fascinates me. No, he's not going to be a high-usage ball-dominant star, but when I watch him play, I not only see the outline of one of the most valuable role players in the league, but an already strong foundation as a pro.

The Rockets have decided to guarantee the $1.8 million salaries of Garrison Mathews and K.J. Martin for 2022-23, sources told ESPN. Mathews, 25, and Martin, 21, have proven themselves as role players who fit in the Rockets’ long-term rebuilding plans.

After the Rockets fully guaranteed his contract for the upcoming season and two-straight starts (due to injury), I couldn't put off writing about his upside any longer.

Why do I think KJ Martin has this upside? For starters, the game of basketball continues to adapt. As I wrote about recently when discussing the importance of screening, the ability for every player on the court to make positive decisions with the ball in their hands has become more and more vital over the past few seasons. While most players won't be relied upon to cause the initial dent in the offense (KJ among them), can you not only finish an advantage, but continue it? Can you continue to put pressure on a defense, exacerbating rotations?

Part of what intrigues me the most about KJ is his elite potential as a supplementary player in pick-and- roll. Saying he is one of the best screeners in the NBA is not an overstatement.

He's adept at utilizing angles, re-screening and continually shifting himself to better adjust for his ball-handler, something that's been an absolute boon for Jalen Green's development.

His subtle slot screens in early offense or off quick-ball reversals give Houston some of their best looks.

KJ does everything in his power to get his man open while also coming dangerously close to getting called for an offensive foul every time. It's an art form, a Southeastern Texas Van Gogh, not yet appreciated in his time. It's easy to see the open space, but it's not always easy to see in-game why the space is open, and so often it can be attributed to a KJ Martin screen.

Kevin Porter Jr. is rejected harshly by Carmelo Anthony, but this screen is just breathtaking. The flip and re-screen is just awesome and totally takes Austin Reaves out of the action.

The screening matters so much, because what makes him such a useful offensive player is what he can do from it. To thrive and survive on the margins as an offensive player, the thresholds are higher for competency, and Martin surpasses them.

He's shooting 62.8% as a pick-and-roll roll man, according to Second Spectrum Tracking, which is among the top third of qualified players in the league. Not bad for a 6-foot-6 forward!

He excels flowing from impactful contact screens into rolls that put pressure on the rim, which is easier said than done.

Martin can struggle a bit with lengthy rim protectors who possess good timing, but his vertical pop and touch around the rim allow him to play much bigger than his listed size.

His ability to hit short-roll passes with regularity and in a timely manner makes it harder to just load up at the rim. His passing isn't otherworldly, but it's pretty good for his role and much better than I expected coming into the NBA.

Oh, about that vertical pop — it's absolutely menacing in early offense. If a defense cannot get set in transition or off of a make, good lord, batten down the hatches because he is rolling to the rim ASAP.

He's fantastic at pushing the ball up, kicking it ahead in transition and then flowing into the offense from there. That's anther important point, even if he's not involved directly in an action, he finds ways to make himself felt. His cutting is fantastic. Lay off him in the slot, and he'll 45 cut or slide in for an offensive board. Sag off him in the corner and he'll time his baseline rim runs for lobs or roam to the paint for a quick touch shot or two-footed dunk without even loading (he's like THAT as a leaper).

His shot was a major question coming into the league, and getting to just under 230 attempts across his two seasons at 35.5%, it's starting to seem reasonable that the shot is going to at least be average on volume. I'm not sure he'll ever be able to incorporate movement (AKA off pin-downs or exit screens), and while it would be awesome if he could, all he needs is a respectable shot that he takes with confidence to unlock the rest of his game.

Hitting a relocation three against a closeout is about as much as you can ask for!

I think he needs to quicken his release over the coming year or two to make it easier for him to get his shot off on more contested looks, especially considering he's mostly shooting a set shot. But the mechanics look good!

Martin has popped as a catch-and-drive player, making lightning quick decisons to attack off the bounce if given space on the catch. He's explosive with his first step, and his handle is tight enough that he can put the ball on the floor a few times before attacking the rack. He's shooting 48.8% on drives, nothing wild, but also nothing to scoff at; he's in the same ballpark as Jimmy Butler, Andew Wiggins and Herb Jones in terms of his field goal percentage on drives, per Second Spectrum (albeit on lower volume).

He's not ultra crafty and doesn't have much shake, but he has some verve as a finisher alongside his line-drive juice that makes him effective.

The recent game against the Utah Jazz on March 2 was a great encapsulation of where he's at and the importance of his shot for establishing himself as an offensive player. He took eight three-pointers in that game, nearly all of them open. The Jazz played Rudy Gobert on him for stretches defensively (Terance Mann vibes ran heavy), and eventually, Gobert had to close on him.

On the surface, these plays are nothing crazy, but being able to capably take a center (and a pretty mobile one at that) off the dribble and make a good kick out to keep the offense flowing is absolutely essential.

If he does get stonewalled on a drive, which happens mostly when he gets funneled baseline and has to drive with his left, he doesn't stop the ball or post up.

This is the good stuff part, which makes him pass the threshold as a margins-based player.

To create a good look on the quick-pitch impromptu DHO is just awesome stuff. Again, ideally he's making that drive, but he's defended by a perennial DPOY, so I'll take this with a grin.

I think the question is: what happens when he gets to a level where he is demanding consistent closes? Can he add a little more polish to his handle? As mentioned earlier, can that release quicken a hair? I certainly lean yes, because those things are relatively commonplace developments, but it's definitely worth noting.

Earlier this season, we saw this with Myles Turner, who is a very different player, but it's the same concept. When a player who gets treated as a non-shooter starts to get treated like a shooter, the equation changes for them and what their role in the offense looks like and the space afforded to them. I lean toward KJ having more that he can lean into, making it more viable for him to handle being treated as a shooter; he's shown really quality footwork to shoot off the pop, which is huge when paired alongside a downhill threat like Jalen Green (have I mentioned how much I love their two-man game already and its potential?).

Put a perimeter player on him to guard the shot and he could be called up for a quick screen to take advantage of that or force a switch that he could slip. Point being, he has a ton of versatility in how he can be utilized in an offense, and I think that only increases his value if defenses begin to consistently respect his shot.

I mean, look at what happened when Miami laid off him entirely in their recent outing when he played the 5 in downsized line-ups (some of the more effective units in that game).

The defense is where things get even more interesting with Martin. At the moment, he is not a good defender on balance. He does things that ARE good, but he has some drawbacks right now that inhibit him being more valuable on that end. It's also very worth noting that Houston's team defensive context is uhhh... tough, ranking 30th in defensive efficiency on the season, per Cleaning the Glass.

He has some of the young-player-on-a-bad-team tropes: He can get back cut due to ball watching, his screen navigation can be rough and while he has some promising flashes, pin-ins can erase him in the corners. His point-of-attack defense can leave you a bit wanting too.

Martin can have some really solid moments of riding out his defender to the rim, keeping his arms up and getting a decent contest around the basket.

However, he lacks much length; he stands 6-foot-6, but has a 6-foot-7 wingspan, which isn't the end-all be-all, but it certainly makes an impact. He can have some moments of foul proneness on the ball, because he often uses his chest to bump off offensive players, which yeah, that's a way to get a consistent whistle against heady ball-handlers.

Yet, his defensive value comes from what he does that defies that logic. Martin is a legitimately impactful rim protector! His timing is fantastic and his verticality (especially for his size) is among the best in the league.

He's excellent roaming the baseline and playing as the low man off the weak corner.

I do think there's a ceiling to what he can be as an on-ball defender, likely a neutral, with some more positive play in the right match-ups. However, he has the tools and technique to be a top-notch team defender. In the right scheme and with the right personnel, I'm pretty confident he'll develop into a plus defensive player.

Martin's playing time has been confusing this season. He started out with DNP coach's decisions to open the year in spite of an awesome closing stretch last season — from when he first began starting in April to the end of the year (averaging 16.8 points, 7.3 rebounds and 2.8 assists while shooting 39.3% from deep on 4.7 attempts per game).

I'm not saying he has to start, but I would really like to see it happen (partially due to my own wanting, but also because he genuinely seems like he would excel with more minutes). KJ Martin appears ready for more.