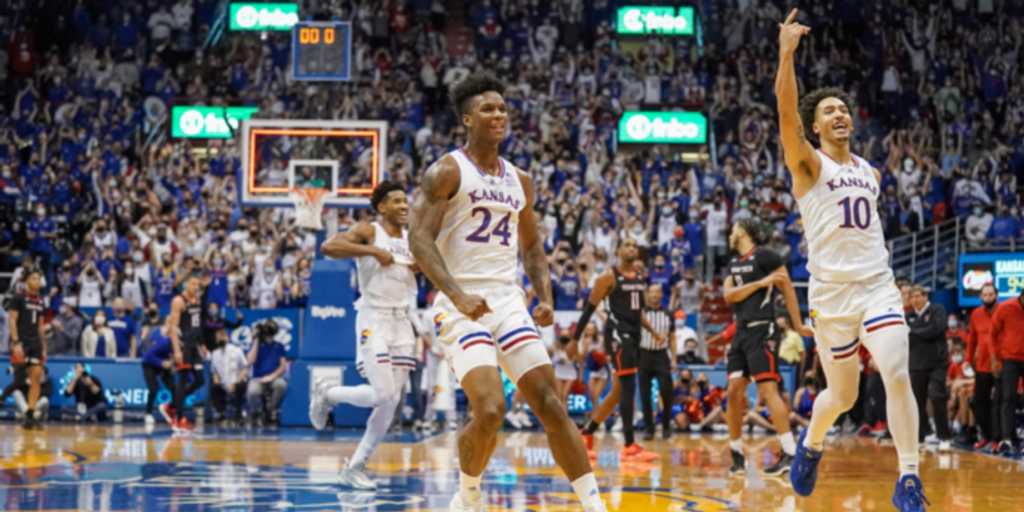 Lawrence, KS  —  The Kansas Jayhawks squeaked out a victory at home, winning 94-91 against Texas Tech. Ochai Agbaji led the team in scoring with 37 points on seven makes from deep, both career-highs. Bryson Williams kept the Red Raiders in it all night with his 33 points on 14 of 19 shooting.

In a pivotal Big 12 matchup between the top two teams in the conference, the Jayhawks (17-2, 6-1 Big 12) hosted the Red Raiders. Kansas came into the day having won 12 of its last 13 games, averaging 77.9 points over their last 10, with the only loss coming to Texas Tech in Lubbock.

The Red Raiders (15-5, 5-3 Big 12) have put together a strong resume thus far and have held opponents to 59.2 points per game over the last 10. Despite losing some tough games to great opponents, they’ve also managed to defeat multiple high-profile teams including Baylor and Tennessee. They are led by Terrence Shannon Jr., who has played nine games this year due to injury and is averaging 12.8 points per game.

Kansas has been led all season by its two standout upperclassmen wings in Agbaji and Christian Braun. Agbaji is a candidate for Player of the Year and is making a strong case as a first-round pick in the NBA Draft, averaging 20.4 points per game on 45.8% from deep. Braun is scoring 15.3 points along with 5.8 rebounds and 3.2 assists per contest.

Both teams traded buckets in the first half until roughly the 8-minute mark when Kansas started to pull away. The Jayhawks held a 36-30 lead at the break behind 13 points from Agbaji. He was feeling it early from deep, hitting 3 of his first 6 attempts. Williams, Tech's senior transfer from UTEP, poured in 12 early points for Texas Tech, which kept the Red Raiders close.

Three minutes into the second half, Texas Tech cut the lead back to two points, but Kansas got hot. Everyone got involved for the Jayhawks with Agbaji, McCormack and Mitch Lightfoot responding with makes of their own. They would stretch the lead to 12 points, and then it got interesting.

Texas Tech went to a defensive scheme in which the team totally took away Agbaji by faceguarding him. Things got dicy at 2:52, when Warren hit a huge triple to cut the lead to four points, capping a 10-2 run. Agbaji responded with a clean, pull-up jumper; Kevin Obanor then hit back-to-back tough shots on the interior to make it 74-72 Jayhawks. Texas Tech was able to get a big stop and Terrence Shannon Jr. hit 1 of 2 from the free-throw line to cut it to 74-73.

Tech had an opportunity to tie or take the lead but missed a tough shot; although on the rebound, Agbaji’s foot hit the baseline, which gave the ball back to the visiting Red Raiders with 19.2 seconds left. Shannon got the isolation call and drove right, but was fouled on the floor at the elbow and sent to the line for a 1-and-1. He nailed them both to tie it up at 75-75.

Kansas had the ball on the side with 11.5 seconds and had time for one play, and Agbaji missed a three at the buzzer to send it to overtime.

He did not, however, miss his opportunity at the end of overtime to connect on a massive catch-and-shoot triple to send it to double overtime. Pandemonium ensued in Allen Fieldhouse, and Kansas capitalized.

McCormack had a strong showing was impactful on the interior all game by posting 13 points and 5 rebounds. The Jayhawks' Jalen Wilson went for 9 points and 11 boards; Braun posted 15 points, 7 rebounds and 6 assists in what started out as a quiet night.

Kansas keeps its place on top of the Big 12 with the victory.