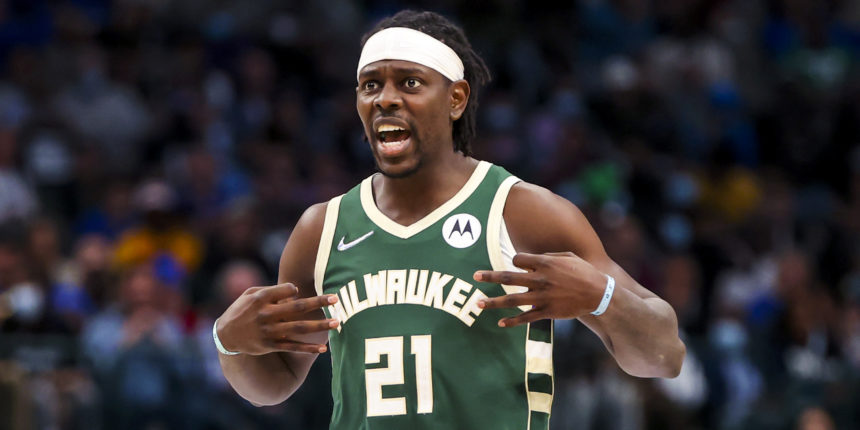 The field seems jam-packed this season, particularly in the revitalized Eastern Conference. Rising stars like Darius Garland and LaMelo Ball have earned potential All-Star game debuts, as has Fred VanVleet with his season up north. Then, there are the stalwarts: James Harden, Trae Young, Zach LaVine and Bradley Beal are all duking it out for the guard spots.

Worthy candidates will miss out — including (most likely) one Jrue Holiday. But regardless of his All-Star status, the 31-year-old remains a bona fide NBA star on both ends of the court, and has helped the defending champion Milwaukee Bucks power through a rollercoaster of a 2021-22 season.

Holiday is averaging 17.8 points, 6.6 assists, 4.5 rebounds and 1.6 steals per game. Those numbers almost mirror his first season in Milwaukee, and are pretty close to his career averages. But they don't tell the full story. After enduring a pretty brutal November from an efficiency perspective, Holiday has come alive in December.

The veteran is averaging 21.0 points, 7.4 assists, 4.4 rebounds and 1.7 steals per game. He's shooting 41.4% from long range, and has a blistering 61.5% True Shooting percentage. With an active Holiday, the Bucks are 10-4 in December (10-5 overall) despite missing Giannis Antetokounmpo for seven games, Bobby Portis for four games and Khris Middleton for three games.

Your textbook definition for Holiday is "stable." He's not a human highlight reel, and usually not a takeover scorer, and this perhaps limits his vote-tally ceiling. But do not mistake reliability for mediocrity.

Holiday has always been a defensive standout — it's beyond a simple mastery of the fundamentals combined with experience. He just has such a gift for understanding what opposing offenses are trying to do, and can see well beyond his individual assignment. It's what has propelled him to three All-Defensive teams. He ranks fifth in The BBall Index's D-LeBron impact estimator among players under 6-foot-5. Per Cleaning the Glass, when Holiday takes the floor, the Bucks give up 4.2 fewer points per 100 possessions.

But the recent statement has come on the offensive end, where Holiday is succeeding as a creator, ball-mover and complementary player. He can fit into whatever Milwaukee needs based on the available personnel. The Bucks are a whopping 12.2 points better on offense per 100 possessions when Holiday is in the lineup.

In the team's most recent win against Orlando, the veteran tallied 18 points and 10 assists as the facilitator for a humming Bucks attack. Holiday frequently pushed the pace against the young Magic, but this half-court assist stood out. It's just a quick dump-off to a cutting Antetokounmpo, but Holiday confirms this bucket by continuing into a screen on Wendell Carter Jr. Any chance at a recovery and a contest is thwarted, and Antetokounmpo gets an easy finish.

When the Bucks are fully healthy, this is what Holiday does: maximizes the scoring talent around him and picks his spots carefully. But this month, the Bucks haven't been healthy, and Holiday has stepped up big-time.

On Dec. 15, Holiday scored 26 points and dished out 14 assists in a 114-99 victory over the Indiana Pacers without Antetokounmpo or Middleton. He frequently drew in the defense to create kick-out chances for Portis, Grayson Allen and Pat Connaughton, and took advantage of some timely cuts.

Holiday's precision as a passer threatens the defense and gives hime some easier scoring chances. He may be the third option on the Bucks, but Holiday certainly has that Ball Dont Stop, "Real Hooper" bag of tricks full of step-backs, hesitations, floaters and finishes. He can use his long arms to extend past bigs for layups. He'll slice through aggressive screen coverage and pull up if defenders are sagging.

The Bucks are 16.4 points per 100 possessions better overall with Holiday on the court this season. That's in the 97th percentile for his position. In his 13 years, the steady guard has been in the 75th percentile or higher in per-100 plus/minus 11 times. Yet, the man somehow has one career All-Star appearance.

Holiday might not get a second this year. That doesn't mean we can't appreciate his greatness in nearly every aspect of basketball. Milwaukee may have had a rocky road in its title defense thus far, but the defending champs have maintained the right path thanks to Holiday.