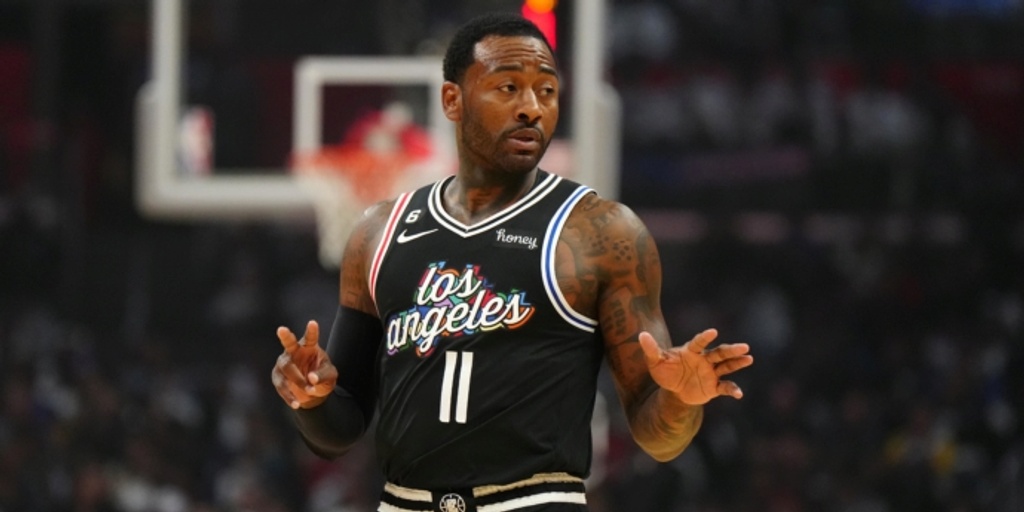 John Wall’s two-year stint with the Houston Rockets finally came to an end last offseason, when the two sides agreed to a buyout – allowing the 32-year-old point guard to sign with the Los Angeles Clippers.

Now, in a candid conversation on the “Run Your Race” podcast, Wall opened up to Dallas Mavericks guard Theo Pinson and co-host AJ Richardson about his time in Houston and why the relationship soured.

As soon as Pinson brought up the Rockets, Wall said that his experience was “trash.”

“Beyond trash. Because I'm going there thinking James [Harden] is going to be there, you know what I mean, when I get traded [there], but he already wants out," Wall said. "When I landed, I’m about to go do my [press] conference and sh*t and he was like, ‘Well, I'm on my way to Atlanta for Lil Baby’s birthday.’ The f*ck?! [He’s] talking about, ‘You want to get on a jet with me?’ I just got traded here! I can’t f*ck up. I gotta be on good terms. I don't know how the owner is, how the GM is, I don't know nothing. This ain't like I'm in D.C. If I was in D.C. I’d be like, ‘Hell yeah, we out!’ It’s my show. But this ain’t my show over here…

“He don't come to training camp, none of that, so that news is all toxic. For me, I ain't played in two years. Mom passed, my Achilles, then COVID so I'm like, ‘I don't give a f*ck who playing, I just want to hoop. That's it.’ I went there, worked my ass off and played.”

Once Harden was traded to the Brooklyn Nets in January, it became clear that the Rockets were entering a rebuild. Wall claims that the team tanked to secure a top draft pick. Houston would win just 17 games that season, finishing with the NBA's worst record and ultimately landing the No. 2 overall pick (which they used on Jalen Green).

“I mean, we lost 20 in a row; we was trying to lose on purpose – tanking,” Wall said. “Like, we started starting someone named Justin Patton! This is how our starting line-up was: me, David Nwaba, Jae'Sean Tate, Justin Patton and somebody else. I'm like, well, who the f*ck can I win a game with, with this sh*t?”

At that point, Wall said he focused on mentoring the team's young core – explaining that this situation wasn’t normal and that they shouldn’t get used to losing or their bad habits.

"I always wanted to teach them like, ‘Don't get used to this sh*t, this is not how the NBA is. It’s just a bad organization right now.’ Like, they got to fix some sh*t around,” Wall said. “I’d always talk to Jalen Green, Kevin Porter, KJ [Martin], like, ‘Don't get adjusted to this losing sh*t, this is not how the league is.’ But at the same time, I had to tell them like, ’The sh*t y’all are getting away with over here, if you go to any other teams, you would be out of the f*cking league! You wouldn't play!’ I'm trying to explain that to them because they think it's sweet. But I'm like, ‘If you ever get traded or go somewhere else, you’re going to be like, ‘This motherf*cker was right!’”

Entering the 2021-22 season, the front office and Wall weren’t on the same page about his role, so the executives ultimately asked Wall to stay away from the team.

“My second year [in Houston], they didn't want to play me at all,” Wall said. “At the end of my first year, they were like, ‘Yo, we want to bring you back. We love the way you leading the team. You've been a leader for the young guys.’ I'm like, ‘I don't give a f*ck about none of that. I said if God put me in this place to help the young guys, then that's what it is. But he didn't put me here for y'all to try to tank and, for me to be a player that can still play and just be wasting my talent, I'm not doing it.’ They were like, ‘Nah, you’re going to start for us next year...’ and whatever. And I would have been fine coming off the bench for them! But I'm like, ‘Don't just give a motherf*cker a [starting] spot, let him earn it!’

“So, I go back to check on my condo and a month before the season, they call... This is Coach (Stephen Silas) talking to me and he goes, ‘How would you feel coming off the bench?’ I said, ‘For who? No offense, but for who? I was your best player last year.’ [He says], ‘This is what the GM wants. He wants you to play like 10-to-15 minutes a game and sometimes don't play.’ I said, ‘I'm not doing it.’ Either you’re going to guarantee me some minutes or not. But I'm like, ‘Let a motherf*cker earn the [starting] spot!’ The coach was like, ‘Man, you don't deserve that, you should be a starter, but this is what they want to do.’ Well, I'm not doing that. I said I'll rehab, I'll work out every day, I’ll stick around the team, I'll come to meetings, I'll fly with ya’ll and I'll mentor the guys. So, that’s what I'm doing. Then, it got to the point where they were like, ‘Don't come around.’ They didn't want me around.

Silas pushed back on Wall’s claim that the Rockets were intentionally trying to lose games.

"When we go out every night, we’re trying to win a basketball game. And we prepare the same way that I prepared when I was working for perennial playoff teams," Silas said, according to the Houston Chronicle. "We have the same expectations for play. We do things in a manner that is putting us in the direction to win every single night that we’re out there. Is that [always] going to happen? No. We’re a young team, we have 19- and 20- and 21-year-old guys who emotionally, they go up and down, and with their games there is going to be inconsistency."

Also, Silas said that Wall's dismissal from the team "wasn't a perfect situation for anybody," and that the Rockets' decision to build around Green and Porter "made it hard for John."

The Rockets are still rebuilding, and they currently have the NBA's worst record (10-36). Houston has the league's 30th-ranked offense (scoring 106.2 points per 100 possessions) and 28th-ranked defense (allowing 115.5 points per 100 possessions). However, Silas doesn't think the Rockets' culture is broken or that this rebuilding period will do long-term damage to the team's young core, as Wall suggested.

"The best teacher is experience, and that's what they're getting right now," Silas explained. "You look at certain guys around the league, and just because they went through a rebuild, they [don’t] have a losing attitude."

Wall is currently averaging 11.4 points, 5.2 assists and 2.7 rebounds in 22.2 minutes per game for the Clippers, who currently have the eighth-best record in the Western Conference at 24-24.