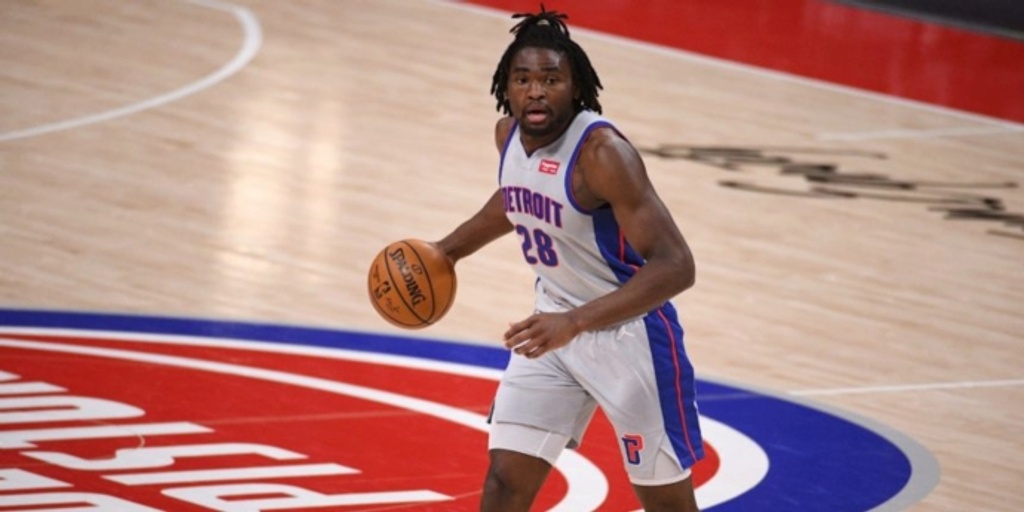 Isaiah Stewart provides plenty of intrigue beyond his motor

Isaiah Stewart plays hard. Really hard, in fact. It’s unmistakable whenever he’s on the floor. This is not the type of “hard” to which the majority of NBA players adhere. There are few around the league whose motors are constantly discernible in the fashion Stewart’s is. He is always aiming to make his presence felt, seeking out some manner to imprint himself.

Last year, that approach was quite beneficial and earned him an All-Rookie Second Team berth. Only a handful of rookies cobbled together more impressive campaigns. The Detroit Pistons have an excellent young prospect whom they should be highly encouraged about. Long-term, there’s a decent chance he emerges as the best center from the 2020 class, despite being the third one off the board in November (fourth, if you classify Obi Toppin as such).

As a rookie, Stewart was a superb defender. The Pistons were 6.1 points better defensively with him on the court, and he ranked in the 88th percentile in Defensive Estimated Plus-Minus, the latter of which was third among first-year rotation guys (apologies, Paul Reed).

Already, he’s a technician in drop coverage against pick-and-rolls. He routinely positions himself in ideal spots, staying at home with his man when needed or delaying the ball-handler’s decision-making until the point-of-attack defender recovers. With active hands, he stunts at initiators to kill their dribble and recognizes when to peel back to rollers.

His fluency as a pick-and-roll defender belied his first-year status and is truly impressive. At his peak, he’s going to be one of the NBA’s best ball-screen antagonists because he’s proficient at baiting the offense into acting as he prefers. That is what premier defenders do.

Flanked predominantly by insufficient perimeter defenders, he was also thrust into many help-side rim protection circumstances and performed admirably. According to NBA.com, as the primary defender, Stewart held players 6.4 percentage points below their average on looks within 6 feet of the hoop, which placed him 30th among 85 players to contest at least four such shots a night.

His proclivity for unceasing activity aids him in these efforts. Although he only stands 6-foot-8, his 9-foot standing reach — a serviceable measurement — shines through around the cup and is amplified by timing and awareness.

We received it in spurts last season, largely over the second half of the year, but I’d also like to see Detroit further explore Stewart’s viability as a switch big. Both Cade Cunningham and Killian Hayes are good point-of-attack defenders, and Jerami Grant offers versatility as well. Mixing up the coverage to gauge the volume, style and caliber of matchup he can handle on switches is a worthwhile endeavor as the Pistons embark on another rebuilding stage with the hopes of establishing more clarity in 2021-22.

The early indicators from year one are rather emboldening, too. Mobility is a critical factor in his pick-and-roll exploits. That remains the case in examples that skew closer to one-on-one contexts. His lateral quickness is exceptional for a big man, and the swiftness with which he flips his hips to answer changes of direction is phenomenal. Assessing these gifts through a playoff lens for Detroit is a bit premature, but defensive versatility is vital in that department (see, the Bucks of Milwaukee, most recently). Stewart has laid the foundation to meet that criteria.

A few warts persist defensively for him, though. His aggression tends to result in high foul counts. He averaged 6.2 fouls per 100 possessions last season, and he’s prone to biting on shot fakes or sly dribble moves. This is exactly the sort of blemish that can be exhausted with development, but it’s something to monitor as he looks to assume a grander minutes load this year.

Despite massive gains as a vertical athlete (more on this later), he is hindered at times. If he is not prompt in his rotation, the slow load-up period enables scorers to shoot before he’s ready to stamp his mark. In conjunction with an adequate, yet nonetheless suboptimal, 9-foot standing reach, he’ll find himself a step or two slow as a defensive anchor on occasion.

As his defensive role scales up alongside his minutes, I’m curious to see if this becomes a more prevalent concern. Technique and timing are the lifeblood of defensive success, but physical tools carry importance, too. Stewart’s margin of error is simply smaller than other centers with superior athletic traits.

Essentially from the outset, Stewart distinguished himself defensively; however, the starkest development that occurred between December and May was offensively. Early in the year, he would barely glance toward the rim when the ball was in his hands; any time he had the ball outside of 3 feet from the hoop, he was searching for a release valve. By the last week of April, he was absolutely launching threes and hunting shots as if he were a premier floor-spacer. Over his final eight games, he took more than four triples six times. It reached the point where he was even eliciting hasty closeouts and countering with ball skills like these, which would’ve been unheard of in December.

Peering further out, his three-point rate leaped from .034 before the All-Star Break to .221 afterward, including .400 during the aforementioned final eight games. He even experimented with some face-up scoring, which is probably his most likely path to any sort of self-creation equity.

Cautiously interpreting post-All-Star Break runs from young dudes on lottery-bound teams is prudent, but this was a guy who glaringly changed the way he approached his role and how he viewed scoring opportunities. His numbers beyond the arc and at the charity stripe aren’t sterling indicators — but examine other statistical hints and the chances of him becoming a legit stretch big crystallize.

He shot 77.4% from the line in college on more than twice his rookie sample (199 vs. 92). According to Cleaning The Glass, he converted 53 of his 104 mid-range attempts (51%) last year. Plus, that post-All-Star jump in three-point volume is meaningful and salient. Stewart only logged 20 three-pointers in 32 collegiate games, a total he matched across his final four games of 2020-21. Believe in the jumper — because he clearly does.

The longball wasn’t the lone example of his striking in-season development. As a screen-and-roll threat, he grew substantially. He never really found the proper cadence to match Delon Wright and Derrick Rose’s tempos, but figured out how to succinctly transition from pick to dive by midseason, and offered his ball-handlers a reliable finishing option. The screening itself is still being refined, but he’s also entirely willing to re-screen or flip the angle to suit initiators.

Once Stewart discovered the screen-and-roll dance, his improvements as a vertical athlete really announced themselves. Hayes consistently sought his play-finishing services, and Stewart exhibited a propensity for big-time slams. The difference between his explosiveness in college versus the NBA is startling. Rarely do players enjoy these evolutions.

Isaiah Stewart just has such little vertical explosion without significant load time. He should be able to finish this over the smaller defender: pic.twitter.com/8EU4E44RCV

... With these clips. The strides are jarring.

Issues are present when there isn’t much of a runway from which to build upon and jump. Despite the table being set for the majority of his interior finishes, he only shot 64% at the rim and ranked in the 35th percentile among big men (per Cleaning The Glass). He still struggles to propel himself off the ground amid traffic; that hamstrings his ability to extend over the top and invites shot-blockers to ply their trade against him.

To be clear, 64% around the rim is not inherently poor. That’s 1.28 points per shot; you want those to be the result of an offensive possession. That is excellent efficiency. Between the leaping setbacks and seemingly poor hands that cause him to fumble some passes, there are just certain hurdles for a 6-foot-8 center who doesn’t sport moon boots as sneakers.

This is why the jumper feels so critical for Stewart’s offensive ceiling. He is not a particularly dynamic roller and effectively passing on the move feels well into the distance developmentally. Emerging as a legitimate pick-and-pop who periodically dives into the paint rather than vice versa is the utopian outcome of his maturation.

Reaching a threshold where he’s one of the league’s better stretch centers is quite plausible, too. How the Pistons deploy him, Jerami Grant and Kelly Olynyk in ball-screen actions alongside their youthful initiators this season will help illuminate what they deem as his consummate path in that regard.

Stewart’s motor captures the attention of basketball diehards. It explains aspects of his alluring skill set, such as his masterful offensive rebounding (10.8% rate, 79th percentile, per Cleaning The Glass) and some of his defensive intrigue. Track him long enough, though, and his motor becomes merely the pilot to draw in viewership.

His defense is much more than effort and suggests a highly impactful peak down the road. The baseline of a complementary offensive game has been established. He’s a notably better athlete after one season in the NBA, making significant progress in flexibility and vertical pop.

The 2020 draft is not even a year removed from history, but it’s clear that Isaiah Stewart does not just have a motor. He plays hard — and he’s a darn good player while doing so.