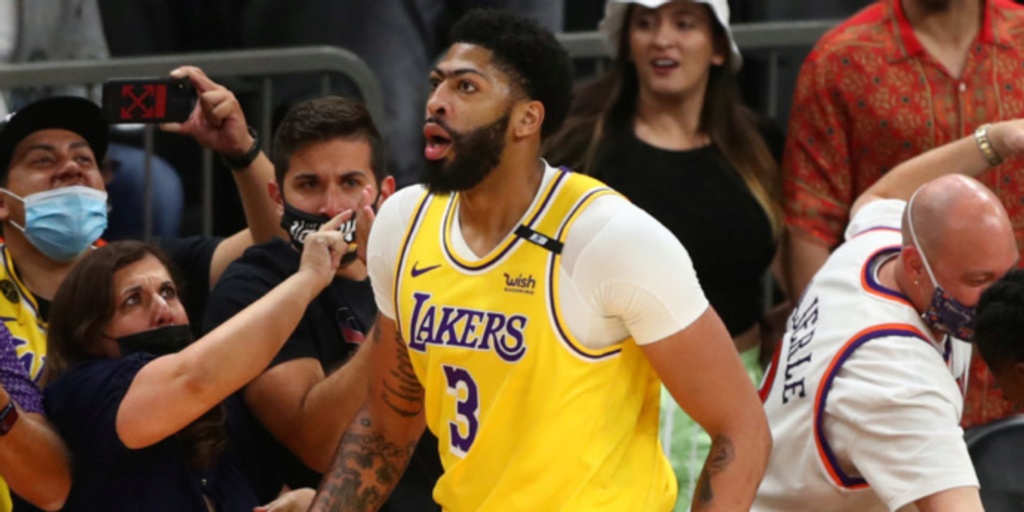 After five-and-a-half minutes of grimacing, limping and straining up and down the court, he fell to the ground writhing in pain. As soon as he stepped on the court, anybody with eyes could see that he wasn’t healthy.

During that stretch, Turner Sports journalist and broadcaster Taylor Rooks tweeted, "Y’all gotta take AD out." To which I responded, "They should’ve never put AD in."

NBA fans across the world witnessed what would have been a story of triumph. One for the archives of NBA history. It's easy to imagine the storyline that could've been.

Facing elimination in the NBA playoffs and down 3-2 in the series to Chris Paul, Devin Booker and the Phoenix Suns, Anthony Davis had the dedication and passion, summoning his inner Mamba Mentality to exhibit superhuman perseverance -- and in heroic fashion, Davis saved the Los Angeles Lakers' season, propelling them to victory and solidifying this as one of the greatest displays of resilience in the history of the NBA on the way to another championship.

Graphic designers for the media companies probably would’ve drawn a picture of AD with a Superman emblem on his chest and a cape under his Lakers uniform.

People love stories of heroics. Isiah Thomas hobbling around on one foot in Game 6 of the 1988 NBA Finals against the Lakers and scoring 25 points in the third quarter, or Willis Reed walking out of the tunnel for the New York Knicks on his bum ankle in Game 7 of the 1970 Finals.

Everything was set up for Kevin Durant to be added to that list in 2019... until it didn't happen.

High school, college and professional coaches across the country were just salivating to be able to use this as an example to their players, to enforce the philosophy that “pain is weakness leaving your body." They would’ve used AD as an example to young athletes that the game, not your health, is what matters most. And a real “team player” would sacrifice a “little discomfort” for the good of the team.

I have seen this all before.

During my tenure with the Washington Wizards, I witnessed team trainer Eric Waters misdiagnose player after player, because what was best for the Wizards organization was for those players to play.

I saw the team tell Jarvis Hayes that he simply had a case of tendinitis in his knee, and had him playing through the pain; it turned out he had a broken knee cap, which ruined his entire career.

I saw him tell Kwame Brown that Kwame was just experiencing a “little discomfort” in his leg, and that he needed to play through the pain to show everyone that he was worthy of being the No. 1 pick; later, it turned out that Kwame actually had a torn hamstring.

I saw Eric Waters tell Gilbert Arenas that nothing was “structurally wrong” with his knee and he needed to show toughness and be a leader; it turned out Gilbert needed surgery and injured his knee worse by playing on it.

I saw him tell DeShawn Stevenson there was nothing seriously wrong with his back, and had him getting ice and stim and playing through the pain. After the season, upon further review by an outside doctor, it was discovered that DeShawn actually had an Inflamed L5 Nerve that was stuck underneath a disc that required not one, but two back surgeries to repair.

My point in saying all of this is not to simply blast Eric Waters, but to show that this happens all the time in professional sports. With team doctors and trainers, there is a conflict of interest, and the sworn medical oath becomes blurred and affects their diagnoses. They are hired by the teams, and are in essence employees of the organization -- not employees of the players. So they don’t have the players' best interests in mind, typically; they only have the organizations'.

The Los Angeles Lakers medical staff basically RG3’d Anthony Davis. They “Any Given Sunday'd" him. They Eric Waters’d him.

He shouldn’t have been playing, period.

The risks outweighed the rewards. Even from a team standpoint, this is one of your franchise players. This is a player who has the capability of single-handedly turning an entire NBA Finals series around en route to a championship. This is a player that you should do everything in your power to convince him how important he is long term.

However, what the Lakers showed was the exact opposite. I don’t care if Davis insisted on playing; they should’ve have the medical integrity to tell him no. On Inside The NBA on TNT, Charles Barkley said, “The doctors cleared him to play? They’re gonna need some better doctors."

But the Lakers aren’t the only ones. This happens all the time. I hope all young players see this and learn that no matter what the circumstance is or how big the game is, your health always comes first, and you ALWAYS get a second opinion from your own doctors that have nothing to do with the organization, as Kawhi Leonard wisely did in San Antonio in the 2017-18 season.

Interestingly enough, a few nights ago on the same platform, the same Charles Barkley made fun of Anthony Davis for frequently being injured and coined the phrase, "Anthony 'Street Clothes' Davis.” Kendrick Perkins, a former player-turned-media member at ESPN, tweeted that Charles needs to "pick a damn side" regarding the situation.

Somebody tell Charles Barkley to pick a damn side. He’s “Street Clothes” Davis when he sits out and he’s ridiculing the medical team for letting him play when he tries to play through it!

Interesting that the media will ridicule a player for being injured, and then act surprised when he succumbs to the pressure of playing in a key game and risking injuring himself worse.

I remember watching Grant Hill. He was about to literally take over the league.

People were calling him out for not playing hurt. Said he was soft, etc. etc., just like they were saying about AD in this playoff series. The Orlando medical staff derailed Grant’s entire career.

Another example is the young Isaiah Thomas. He shouldn’t have been playing in Boston in the 2017 playoffs, but he played, ended up hurting himself more, ended up needing surgery, cost himself $100 million, came back and played after losing his sister in a tragic accident. What did the Celtics do after all of that? They traded him that summer because they knew about his injury and knew that he needed surgery.

There is a reccurring theme here.

I saw many responses on social media of people (usually non-athletes) saying that Anthony Davis made the decision himself to go into the game, so anything that happens is his fault and not the organization’s -- but it’s not that simple. The onus shouldn’t be placed on the athlete’s shoulders. Of course athletes are going to want to play, but it shouldn’t be up to them.

A solution to this league-wide issue was suggested to me by a lawyer by the name of Marlon Amprey. He explained that the Players Association should assemble a group of outside doctors/specialists (or specific doctors/specialists the player suggests) that have no connection to the team whatsoever, and will provide second & third opinions and give players detailed reports on their health and risk of injury. All doctors’ reports given by teams that drastically differ should go under review, and there should be repercussions for team doctors and trainers who medically clear players who shouldn’t be medically cleared to play.

The bottom line is, if you're injured, any organization will throw you out there in a heartbeat if they feel it is best for the organization. They will publicly criticize you if you don’t play, and if you play and re-injure yourself worse -- or just don’t play up to their expectations (as if they don’t know your playing injured) -- they will get rid of you in a New York minute.