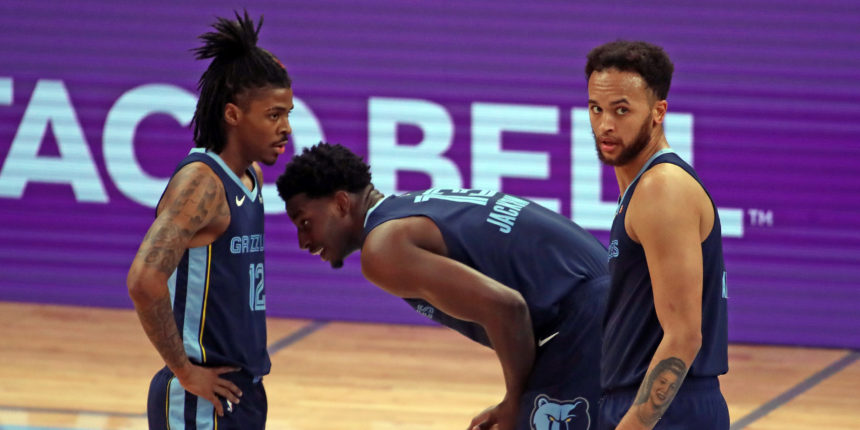 The Memphis Grizzlies believe they have a great foundation after returning to the playoffs much faster than anyone outside the franchise expected.

That makes losing their first-round series to the top-seeded Utah Jazz a little easier to take.

“We definitely didn't want our season to end the way it did, but I mean we have a lot to be proud of," guard Ja Morant said after Memphis was eliminated in five games by Utah. "Our fight. We had an unbelievable season. We achieved one of our goals. ... We know what we got to do. Everybody's hungry for more.”

Memphis exceeded expectations by finishing 38-34 to reach the NBA's new play-in tournament. The Grizzlies beat San Antonio, then the Golden State Warriors on the road to earn the No. 8 seed and snap a four-year playoff drought.

That made the Grizzlies not only the youngest team this postseason but the youngest in the playoffs since Oklahoma City in 2011. They won Game 1 before falling in five games to the team that posted the NBA's best record during the regular season.

“We've got a bright, bright future ahead of us,” Memphis coach Taylor Jenkins said. "And I know if we continue to work on the things that we are capable of and we will work on and the investment everyone’s put in, we’re going to have just this bright future that I’m so excited about.”

Reaching the postseason should speed up the Grizzlies' learning curve. Dillon Brooks, who averaged 25.8 points a game against the Jazz, said they learned the importance of adjustments during a series, especially against the very talented and experienced Jazz.

“We'll be back," Brooks said. “I think the taste of the playoffs is on everybody's mind. ... This offseason has got to be a special offseason for every single one of my teammates."

Morant had an impressive follow-up season to his NBA Rookie of the Year debut, becoming the fifth-youngest player in NBA history to lead a playoff team in both points and assist a game. He then set a franchise record with 47 points in a Game 2 loss to Utah.

Only George Mikan, in the BAA in 1949, scored more than Morant's 73 points through his first two postseason games. Morant became the fourth player in NBA history and first since 1970 with 100 or more points through his three games with 101, joining Wilt Chamberlain, Mikan and Kareem-Abdul Jabbar.

Morant finished the series with back-to-back double-doubles and now plans to work on every aspect of his game during the offseason. He struggled at times at the free throw line and his 3-point shooting dipped from his rookie season. But he shot 46.7% from 3 during the play-in games, and he was 5 of 9 in Game 5 after the Jazz dared him to shoot 3s.

Jenkins called Morant an “unbelievably huge part of our future" as someone who has only scratched the surface of what he can become.

“Ja has grown up so much this year,” Jenkins said. “I know he's going to be highly motivated going into the next season taking the next level as a player. His words going into the locker room were ‘We will be back.’”

Finishing games is an area the Grizzlies can improve. They might not have had to fight their way into the No. 8 seed if they had finished off games where they had leads.

They blew double-digit leads twice against the Lakers. They led by 13 at New York on April 9 with 6 minutes left and lost in overtime. Luka Doncic hit a lunging 3 to beat them April 14 after they couldn't hold a six-point lead, then they blew a 20-point lead May 1 losing by a point in Orlando.

Against the Jazz, they got very close in Games 3 and 4, yet couldn't find a way to close out in the final minutes.

Memphis led the NBA during the regular season scoring 55.8 points in the paint, 17.3 points off the fast break and adding 15 points off second chances per game. They set franchise records averaging 113.3 points a game and 11.2 3-pointers per game.

That's a long way from the “Grit ‘n’ Grind” era that focused much more on defense.

Memphis goes into the offseason healthy, which is good news for the Grizzlies after playing much of this season without Jaren Jackson Jr. and Justise Winslow as they recovered from injuries. Memphis also has Jackson, Jonas Valanciunas and Kyle Anderson under contract for another season.

The Grizzlies built a deep roster that helped them survive without Jackson, and now that gives the front office some flexibility along with the No. 17 overall pick in the NBA draft.

Memphis announced Thursday night a long-term extension for GM Zach Kleiman, who took over as executive vice president of basketball operations in April 2019. The team didn't announce terms of the deal.