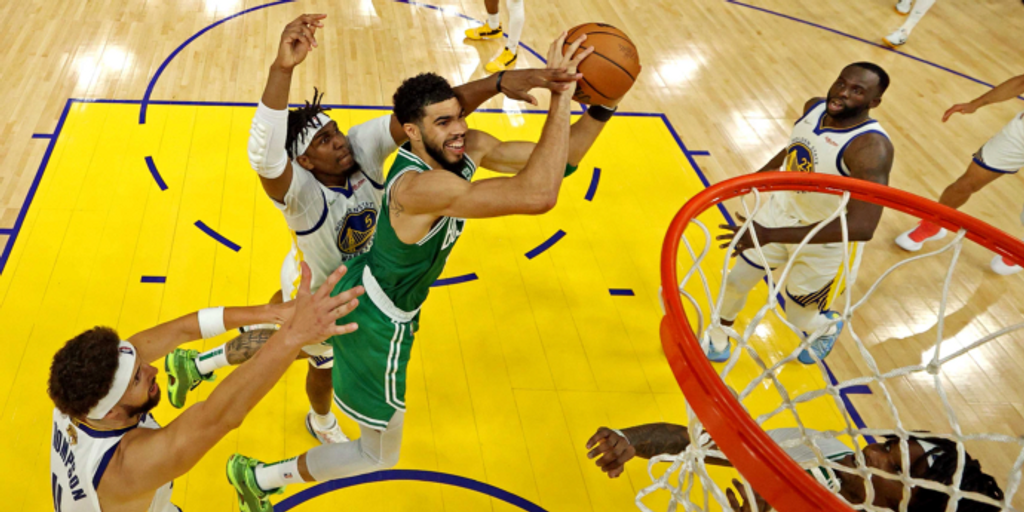 If anyone forgot the Golden State Warriors were a top-five NBA defense this season, they certainly felt a statement of a reminder on Sunday.

The Warriors absolutely stonewalled the Boston Celtics for most of Game 2, winning 107-88 and giving up just 58 points in the latter three quarters. They forced 18 turnovers and used a 35-14 third quarter to squeeze the life out of the Celtics and even the NBA Finals at 1-1.

Those turnovers, and the ghastly third period, are certainly part of the story. But Boston also shot a hideous 15-for-43 inside the three-point line, making as many threes as twos in the loss. According to PBP Stats, that 34.9% clip was Boston's second-worst of the entire season (regular season and playoffs) and third-worst of the last five years. After three quarters, the Celtics were just 9-for-33 on two-pointers, which put them on pace for their worst rate in five seasons if not for some garbage time buckets.

Golden State made creating two-point chances a mind-bending puzzle, and the Celtics didn't come close to solving it last night.

Let's work from Seth Partnow's tweet. Boston scored just 6 points on unassisted twos, per PBP Stats, which is the lowest Celtics total in any regular or postseason game in the last five years. Jayson Tatum, Derrick White and Payton Pritchard each contribued an unassisted two-point basket. That's it.

The Celtics want to find mismatches, beat the Warriors off the dribble and either get to the rim or move the ball around to a shooter. Early on, Boston tried on a few occasions to target Kevon Looney. But Golden State's help defense was spectacular.

In the first clip here, Jaylen Brown gets the 1-on-1 he wants against Looney and dusts him with a between-the-legs crossover before exploding to the basket. Klay Thompson and Draymond Green respond with two perfect rotations; Thompson meets Brown at the rim and Green cuts off any dump pass to Robert Williams III. Brown has a small window to kick out to Tatum and doesn't hit it, and the result is a bad contested miss.

The second play includes phenomenal defense from Andrew Wiggins, who negates any potential pass to Williams III before coming back to help on Tatum's drive. Green again rotates over to stop Williams III from a lob, and there are too many long arms in the way for Tatum to make the long corner pass to Brown. The result? A bad, contested miss.

That's part of what's so challenging for Boston. The Celtics can get the matchups they want, and they can beat said matchups, but Golden State is timing its help defense exquisitely and making them rethink what's available.

Tatum tried to get himself going in the post during the first quarter. He found perceived matchup advantages against Wiggins and Jordan Poole on these two plays.

Not enough people realize that Wiggins is a strong dude. He's been able to battle guys in the post and win his fair share of matchups for most of his NBA career — even before arriving at Golden State. Don't be fooled by his leaner frame (which isn't even that lean anymore).

In both clips, the Warriors flank their post-up and face-up defenders with an army of watchful helpers. Looney teases in and out of the paint, and Green waits for Tatum to spin out before helping and stripping the Celtics superstar. All five Warriors are dancing at Wiggins in the second play, synchronized, as they anticipate him looking to take advantage of Poole. The result, once again, is a bad, contested miss without an ideal outlet.

Several Warriors stepped up with impressive individual moments to stop Celtics drives. Thompson made life difficult for Al Horford on multiple possessions; Horford finished just 1-for-4 on the night after his Game 1 explosion. Draymond Green wreaked havoc on Brown when the latter dared to drive on the All-Defensive Team member.

I'd like to additionally shout out Nemanja Bjelica. He wasn't perfect, but the former EuroLeague MVP had some real bright spots filling in for Andre Iguodala.

Bjelica is a strong, 6-foot-10, 234-pound, 34-year-old forward. He's not as mobile as some of today's young do-it-all-defenders, but he's more well-equipped than a traditional big. He battled on these possessions against Tatum. Bjelica's primary objective was to play physical, get his hands and shoulders up in Tatum's driving space and impede the attack so that back-line help can arrive.

He did that. And though Payton Pritchard sauced him up a bit in the last clip, Bjelica still kept his feet moving and provided a large-enough contest to force a miss. It's these kinds of miniature moments from low-minute players in the spotlight that can quietly flip momentum.

The Celtics shot 49.1% on drives to the basket in the regular season. They're at 35.1% through two games of the NBA Finals. But there was one clip that provided some optimism for Boston moving forward:

Brown is again trying to attack a Looney mismatch. The Warriors know it, and they have Thompson on Horford while Green cheats in off of Grant Williams to prepare to help. But with so much attention on Brown and the apparent mismatch, Horford is able to creep around behind Thompson and into the dunker spot, where he's perfectly positioned for a dump-off pass. Brown's able to hit him. and it results in a rare at-rim bucket.

It's these kinds of plays the Celtics need to create. They have two offensive hubs in Tatum and Brown who can draw an entire defense's attention (and honestly, Marcus Smart's developed some driving gravity too). Both players have proven they can make the required passes to cutters or shooters. Now, Boston needs to get creative with finding these windows and outlets.

The Warriors won't make it easy; they're long, strong and pretty disciplined across most of the rotation. But if Boston can apply pressure with its passes, that'll start getting the ball moving and eventually circle back to easier chances for its stars.

We'll see how the Celtics adjust in Game 3.