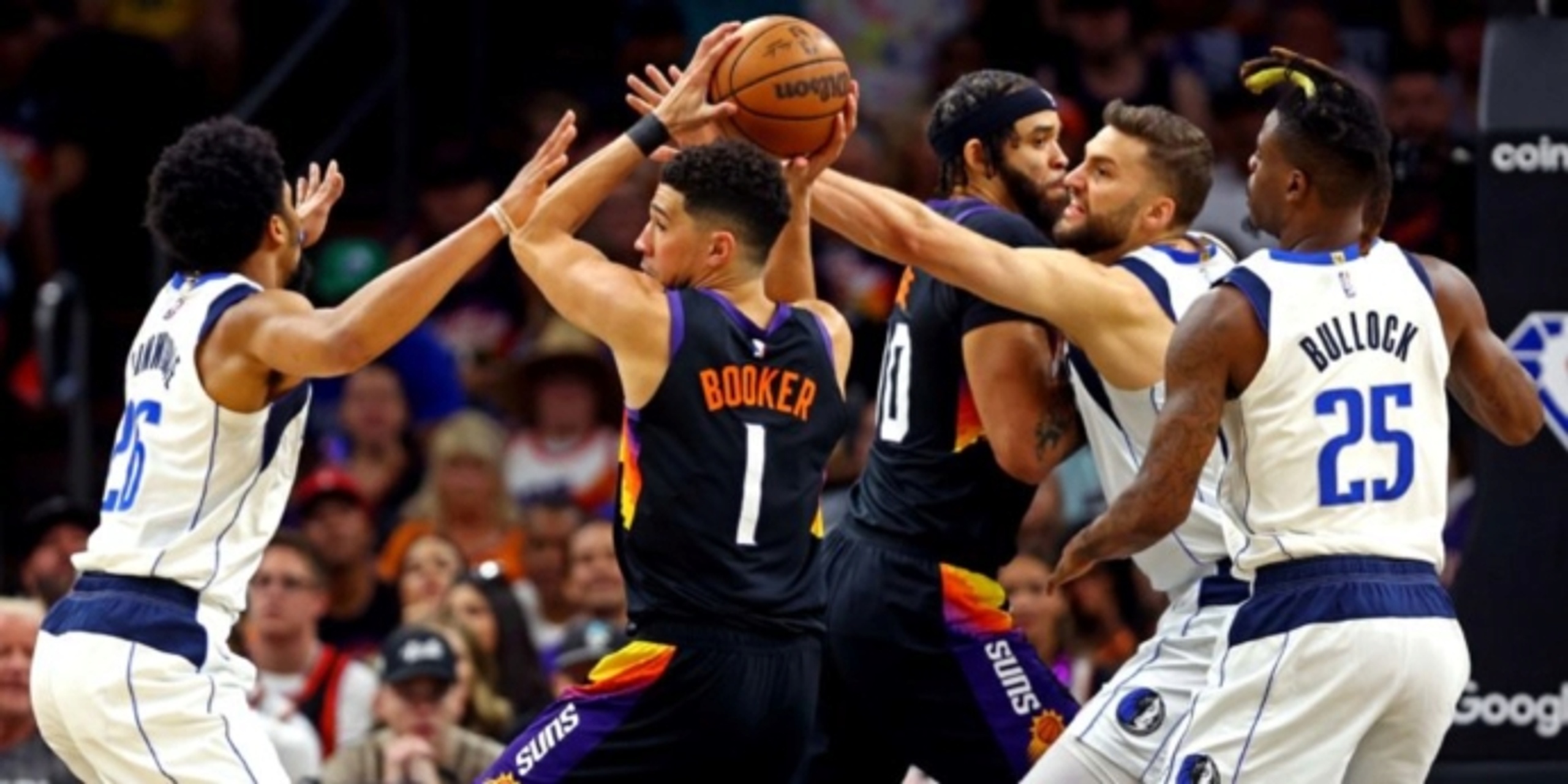 How the Mavericks slowed Devin Booker by forcing him to improvise

Over the past few seasons, perhaps the Phoenix Suns’ favorite way to catalyze rhythm for star guard Devin Booker has been a Chicago action.

In a Chicago action, a player flows off a pindown screen into a dribble handoff and assesses the options from there.

With Booker flanked by viable spot-up shooters like Jae Crowder and Mikal Bridges, a lob threat in Deandre Ayton and a creation release valve in Chris Paul, most opponents struggle mightily to contain the Suns’ offense out of this play.

The “pick your poison” adage comes into focus. Sell out to slow Booker on the catch, and he’ll deliver a feed to one of the surrounding marksmen. Load up against Ayton’s dive and Booker can burrow his way toward a mid-range pull-up. Stay home against shooters, and Booker will loft a pass to Ayton at the rim.

In Game 1 of the second round, the Dallas Mavericks experienced this confounding spectrum. Booker only scored 23 points on 7 of 20 shooting, but he dished 8 dimes to a single giveaway for a 121-114 victory. As Booker conducted possessions out of Chicago action, the Suns routinely carved up Dallas.

In Game 5, when Booker scored 28 points on 11 of 20 shooting in a 110-80 rout, the Mavericks endured similar troubles. Much of the series, whenever he faced single coverage or Dallas failed to neutralize Ayton on the roll, the Suns’ attack flourished. Letting Booker maneuver into space on those plays, particularly going to his right, is often a death knell for defenses.

Although Booker’s 30-point Game 2 arose more so out of pick-and-rolls, isolations and transition opportunities, Dallas’ ability (or lack thereof) to slow him in Chicago action proved to be somewhat of a bellwether for its collective success.

Sending a crowd in Booker’s direction and mucking up his passing windows can consistently throw him for a loop. The Mavericks tout considerable size, length and mobility on the perimeter, which they applied to flummox the three-time All-Star (and his teammates). His worst outings of the series all stemmed from Dallas barricading the paint, bringing multiple bodies his way and coaxing improvisation out of him.

Utilizing his 6-foot-5 frame, snappy elevation for jumpers and feathery mid-range touch, Booker thrives against single coverage. He’s also prone to predetermined reads as a facilitator. By limiting both of those scenarios, Dallas bottled him up. He’s developed into a good passer, but a buffer period exists when the opening he seeks out is not there. The Mavericks reliably took away his anticipated choice, and cornered him and the Suns into resetting the offense.

If the lob to Ayton is readily available, he makes it look second-nature; when the lob isn’t, possessions begin sticking. In Game 3, Booker took just 13 shots (18 points) throughout his 40 minutes and compiled 6 assists to 5 turnovers. Across Games 6 and 7, he scored 30 points on 40.9% True Shooting and had 5 assists to 12 turnovers.

Dallas extended his initial touch further from the paint, sagged off the shooter to his left and made him reverse course. Rarely did he locate the open teammate on the wing. The Mavericks know that read is a gap in his passing vision and exploited it. Paul’s aversion to spot-up triples aided, and likely factored into, their game plan  too.

The scouting department and coaching staff deserve massive praise for those tweaks, as do Dwight Powell, Maxi Kleber, Reggie Bullock and Dorian Finney-Smith. The former two’s mobility and dexterity agitated Booker on the catch and pushed him away from the hoop; the latter two constantly stayed connected amid his off-ball motion and shrunk open space.

All this defensive precision is a subplot of fashioning an offense so reliant on Luka Doncic’s superlatives. The risk is he falters down the stretch in crunch-time of a tight contest. Everyone acknowledges that, and has watched it occur at times.

The positive, though, is how Luka's heliocentric approach preserves energy for everyone else and enables the Mavericks to play the hellacious defense they did for much of the second round (and this year). Had they been tasked with loftier offensive responsibilities, the defensive connectivity and timing may have suffered. Instead, their jobs were straightforward, and the defensive nuances headlined their checklist each night.

In Game 7, Dallas threw the kitchen sink at Booker (as well as at other points in this matchup). Paul clearly lacked the verve to boogie in ball-screens like he customarily would, so Booker emerged as Phoenix’s primary offensive creator — a storyline that bubbled over the course of the series.

To stymie the Suns’ offense, the Mavericks repeatedly blitzed or trapped Booker and funneled offense to unsuitable decision-makers. Players like Bridges, Crowder and Torrey Craig received passes with Dallas’ defense still slightly recovering after a show or double-team. None of them proved adept to burn the Mavericks for that gambit.

Booker is an excellent player and a deserving All-Star. He will rightfully make his inaugural All-NBA appearance this season. But Phoenix’s offense generally functions at its peak when Paul is orchestrating. Through increasingly applying full-court pressure against the Point God and targeting him on switches defensively, the Mavericks wore him down and disrupted the Suns’ offensive hierarchy.

Paul and Ayton have fostered delightful synergy in pick-and-rolls, while Paul’s historically great passing wizardry sets up Bridges, Crowder and Cameron Johnson to work off advantages. Booker is, of course, the superior scorer, yet Dallas quelled his trademark play. In doing so, it thrust his shortcomings under the microscope and dared him to win as an elite decision-maker.

He couldn’t, and Booker, along with the 64-win, top-seeded Suns, were sent home far earlier than they envisioned this postseason.