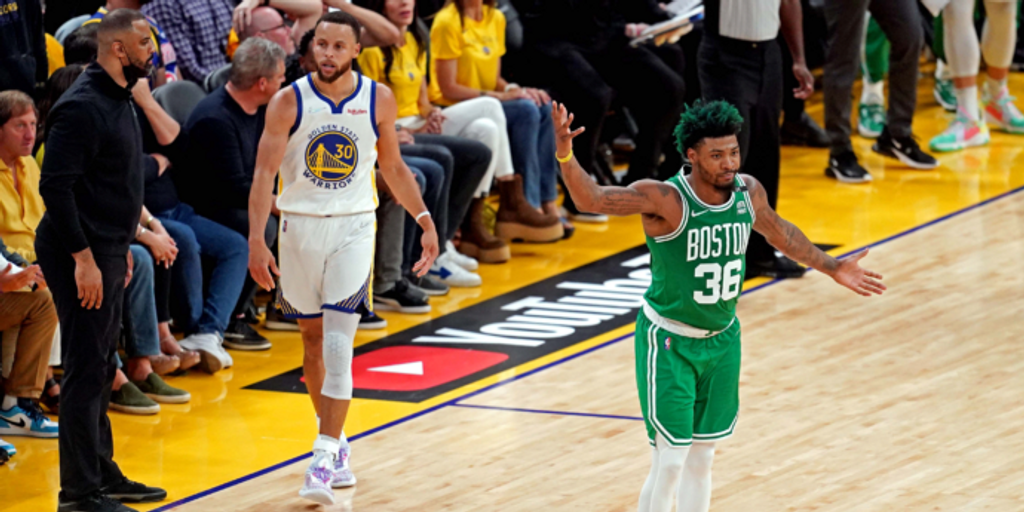 Adjustments sit central to the outcome of virtually any playoff series. Choose a series, whichever you wish, and the result will, in some form, likely be dictated by adjustments.

Whether that’s a team crafting beneficial ones, another team failing to do so or the superior side forcing its opponent to deviate from its preferential style, adjustments are the secret sauce of postseason battles.

They’re also among the most enjoyable components of the playoffs from a viewer’s perspective. Watching a team decipher its counters, practice them and assess their success is invigorating. Even cosplaying as an armchair coach and dreaming up or anticipating potential adjustments gets the juices flowing.

In Game 1 of the 2022 NBA Finals, adjustments persisted as the protagonist. Behind a zany, 17-0 fourth-quarter run, the Boston Celtics emerged victorious over the Golden State Warriors, 120-108, and ripped away home-court advantage.

Broadly, the Celtics’ 21-of-41 night from deep was a leading factor in that conclusion. On an in-depth level, torrid shooting reflected Boston winning the war of adjustments and guiding Golden State toward places it does not wish to frequent.

Among the alterations was how Boston responded to Stephen Curry lighting up the nylon for 21 first-quarter points, including six long balls. Early on, the Celtics operated in deep drop against his ball-screens and hastily saw why that tactic had to be extinguished. Couple the strategy with a few uncharacteristic miscommunications, and Curry’s explosive prologue is deductible.

Imperfect screen navigation and a big man parked below the arc was the recipe for Curry to cook — and cook he did.

Outside of the first frame, though, Boston’s defense against Curry was superb. It maintained its ideal of drop coverage, but brought the big man much closer to the level of the pick. Marcus Smart and Derrick White are premier screen navigators and stayed tethered to him.

Smart’s presence was akin to a linebacker, cutting off driving angles and limiting space to rise for jumpers. White’s was that of a gnat, locking onto Curry’s hip and providing constant discomfort.

Each successfully ran him off the line and funneled him inside, where further irritants awaited. When a big man wasn’t guarding the screener, Boston switched the action, often throwing size and range at the two-time MVP.

After hoisting eight triples in the first 12 minutes, Curry logged just six over his ensuing 26 minutes. Smart and White were the leading proponents behind that decline. Robert Williams III’s length (7-foot-6 wingspan) and sprightly bounce navigated him away from threes. Al Horford’s mobility, astute positioning and jazz hands perturbed Curry.

Twenty-one points on 9 shots in 12 minutes ended in 34 points on 25 shots in 38 minutes. That’s a very good performance, but nowhere near the show-stopper his first quarter previewed. If this coverage holds, Curry's playmaking to prop up the offense will carry heightened value.

Golden State followed its 32-point first quarter with 76 points over the final three. On the whole, it yielded an Offensive Rating of 90.1 (33rd percentile) in the half-court, per Cleaning The Glass. For contrast, Boston’s was 114.1 (89th percentile). The crux of that disparity, at least from the Warriors’ standpoint, was the Celtics erasing their pindowns and Floppy actions all night.

Those openings and advantages dissipated. Boston’s synergy, communication (led by Smart) and confrontation on switches stymied Golden State’s half-court plans. The Celtics sport a substantial strength advantage on the perimeter, and leveraged that with off-ball physicality and top-locking screens. These were perhaps their finest possessions, but they’re accompanied by many more.

That plotline started from the Warriors’ opening touch of the game. Look how crisp those switches are. Nobody does it better this year.

(Shout out to Jaylen Brown, by the way. He flourished tracking Thompson’s motion and denying him passes. He helped stymie numerous possessions. That dude is playing stellar ball this postseason.)

In an aim to open up the offense and avoid playing multiple non-scoring threats (Draymond Green, Kevon Looney, Andre Iguodala), Steve Kerr elected to close with Poole over Looney. The upshot of that decision, though, left Golden State incredibly small on the interior.

Before both teams emptied their benches, Boston’s closing lineup outscored Golden State’s 10-2 in three minutes. Smart’s corner three, which pushed the lead to 114-103, stemmed from the Warriors’ lack of size in the Curry-Poole-Thompson-Wiggins-Green quintet.

Boston shuts down Golden State's offense, so the Warriors downsize and replace Looney with Poole, which allows Horford to snag this rebound and create a critical 3.

Celtics seemed to win the adjustments battle in Game 1. pic.twitter.com/ZNAaGKaTRZ

Three of the Celtics’ most critical two-way forces are Smart, White and Horford. All three are brilliant defenders and capable offensive players with mercurial jumpers. Both Smart (33.1%) and White (30.6%) are hovering in the low 30s beyond the arc these playoffs, while Horford’s at a scorching 46.3% after 33.6% in the regular season.

Regardless of their numbers, the Warriors clearly opened Game 1 content to let each of them fire away and prioritized helping elsewhere instead. By night’s end, the Boston trio combined for 15 threes on 23 attempts and tangibly reshaped how Golden State guarded it.

Here’s how those three were viewed as perimeter options early on.

Curry offers a tepid closeout on Smart. Horford is invited to toss up a pair of wide-open looks. Poole leaves White alone to help on Brown’s drive.

Later, though, this dynamic evolved. All of them began to garner attention as shooters. The paint was no longer off-limits. Driving lanes populated. Boston’s bevy of connective passers found easier space to maneuver and wield that trait.

- Green closing out on Horford in the first clip simplified his passing route to Tatum. Williams’ vertical spacing kept Green at home on Smart’s score; his lob threat was quite useful at times, despite his fickle outing.

- Poole biting on White’s shot fake after treating him like a non-shooter in their opening minutes together is a major shift. Brown had scored or assisted on 18 of Boston’s 20 points of the fourth before Horford’s three, hence Thompson’s conflicted decision-making.

- Smart, White and Horford compose three of Boston’s trustiest passers and decision-makers. Smart and White are two of its best drivers. How Golden State defends them and the impact of their outside shooting feels quite correlated with the Celtics’ offensive production moving forward.

- If the threes are falling and the Warriors no longer sag off, the offense should be pretty crisp. If the three are falling, but they’re allowed to keep firing, how they navigate that green light without a downhill opportunity is important. If they don’t fall, Boston will likely encounter trouble (duh, missing shots is #notgood).

Summing up Game 1 by shooting variance ignores the process behind all that transpired. The Celtics’ adaptability and shot-making coalesced for victory. Adjustments will continue to manifest. Who they favor and who generates them is both a compelling mystery and essential to determining this year’s champion.

At least for a night, the answer to those unknowns was Boston.