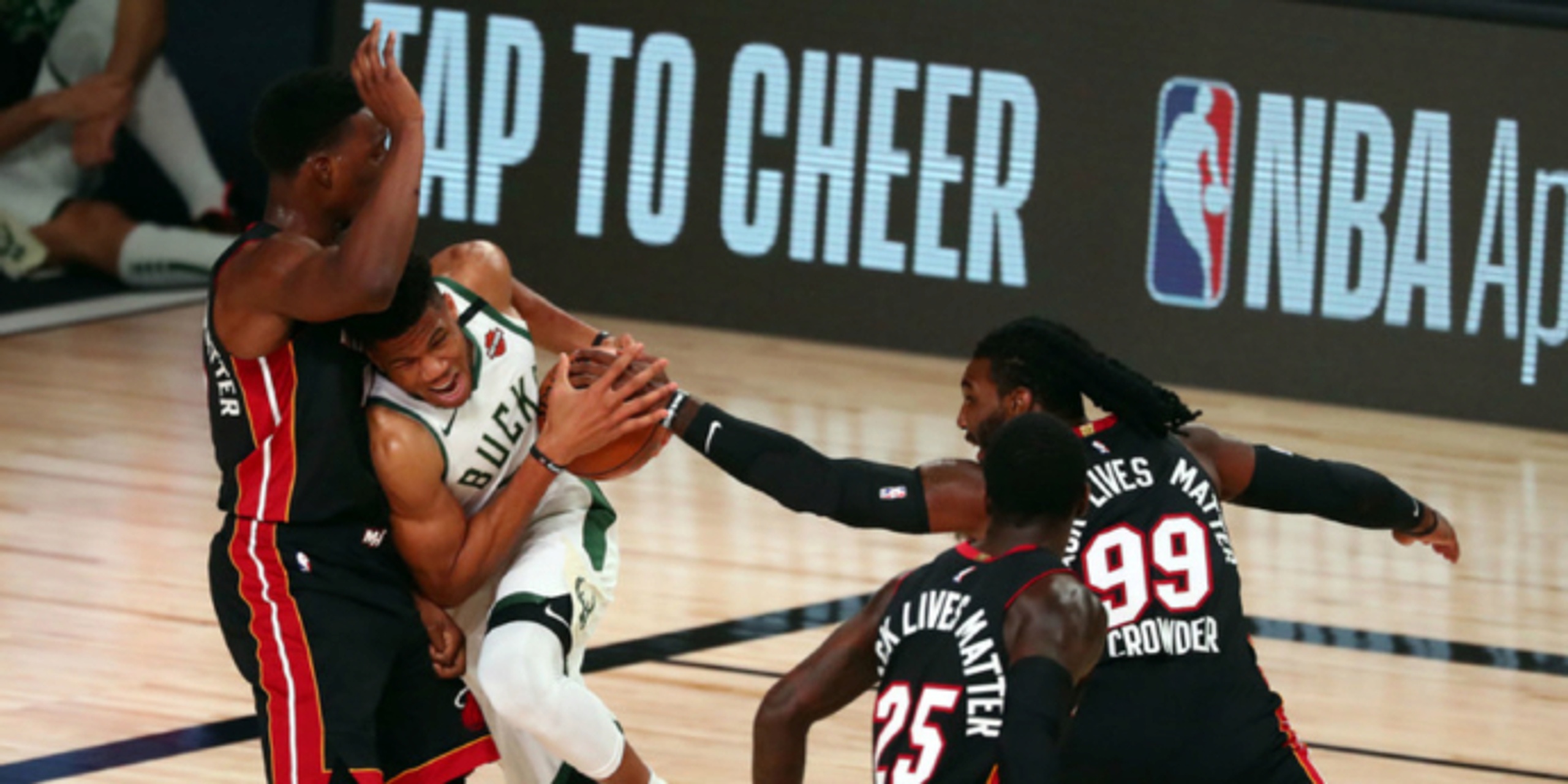 How the Heat can upset the Bucks

The Miami Heat can beat the Milwaukee Bucks.

It’s usually foolhardy to take regular-season evidence as gospel, but there’s been a case for the “upset” all season long.

The Heat bomb away from three, while the Bucks - by design - give up a ton of those looks. Personnel-wise, the Heat have the bodies to somewhat limit the NBA’s most dominant paint force. There’s also a strong argument to be made that the Heat have a coaching advantage, particularly in a playoff setting. Erik Spoelstra has a history of making series-changing adjustments; let’s just say Mike Budenholzer, as good of a coach as he is, does not have that resume.

Let’s get into the particulars of how the Heat can win this series.

The biggest key to beating the Bucks is bothering Giannis Antetokounmpo. Notice that “bothering” is the operative term, and not “stopping” because no team in the league can really do the latter.

Barring borderline voter fraud, Giannis is set to win his second consecutive MVP award. His per-game averages - 29.5 points, 13.6 rebounds, 5.6 assists - are literally unprecedented. The bulk of his game is built on his unrivaled ability to get to, and finish in, the restricted area.

Giannis not only led the NBA in shots at the rim by 52 attempts, his efficiency (74.2 percent) ranked sixth among the 102 players that attempted at least 200 shots at the rim this season. His stride length, his cadence, his length and his upper-body strength makes him nearly impossible to stop once he gets into the paint.

The best defense for Giannis is deterrence.

The Heat were among the best teams in the league at forming the “wall” against Giannis, both in transition and in half-court situations. He “only” averaged 25.0 points with a 57.9 True Shooting percentage during three regular-season/seeding matchups against the Heat, both well-below his overall averages (29.5 points, 61.3 TS%).

Most notably, Giannis turned the ball over 17 times in the three meetings (5.7 per game).

What makes the Heat a unique matchup for Giannis is the collection of defenders they have. Bam Adebayo did as good of a job as anyone against Giannis this season. Jimmy Butler and Jae Crowder are smaller, but both are rugged post defenders that can make things difficult.

The Heat have the benefit of tossing one of those guys on Giannis, while getting extra support from the others. Take this example from the seeding game below. There’s no Jimmy Butler here, but watch how Adebayo and Crowder work in tandem.

You can see Giannis hunting for a gap to attack early in the possession. Crowder cuts off his right, while Kendrick Nunn takes away the left. Giannis tries to face up and jab-and-go to his left, but Crowder is there again to help.

It will take multiple perfect efforts to really contain Giannis. All it takes is one crack in the wall for him to come ramming through it.

Giannis was still able to get his, but he had to work much harder to do so. That kind of dip in efficiency, if it carries over into this series, could be enough to make this a true coin flip.

The Bucks don’t want to give up anything in the paint.

They employ a drop defense against ball screens, a scheme that calls for their bigs to hang in the paint while their perimeter defenders fight over screens. When you have Eric Bledsoe, Wesley Matthews, Khris Middleton, Donte DiVincenzo and George Hill up top, you don’t have to put much stress on your bigs. All of those guys are good at fighting over and staying attached to the ball-handler.

Not only did the Bucks allow the fewest amount of rim attempts per game this season, they were by far the stingiest team when teams did get there (55.2 percent).

The natural counter to a drop scheme is running a pick-and-roll with a stretch big. With the Bucks wanting to keep "the Lopii" in the paint, it leaves them susceptible to pops. Kelly Olynyk shot 50 percent from three on 5.3 attempts against the Bucks this season, with most of those coming in pick-and-pop situations.

It should come as no surprise that the Heat had more success running pick-and-pops (1.06 PPP) than they did with pick-and-rolls (0.92) against the Bucks, per the Second Spectrum source. Those shots are going to be there, but there’s a level of decisiveness that needs to be present. The Heat can’t allow the Bucks time to recover.

Tyler Herro misses the window for the pass pretty badly. An easy catch-and-shoot opportunity turns into a late-clock isolation; that just can’t happen.

This could also be the “win-the-guard-battle” section, but this makes it all encompassing.

As mentioned earlier, there are natural gaps in the Bucks’ drop defense. Above-the-break threes are going to be available for bigs. They’ll be available for the guards too, though it’ll take a little more work. The Bucks’ perimeter defenders navigate east-to-west as well as anyone in the league.

Look at the job Matthews does on Duncan Robinson. In the span of 10 seconds, he:

The play doesn’t break down until Lopez steps up out of fear of a Robinson jumper. Once Lopez does, Robinson is able to fit in a pocket pass to a rolling Adebayo. That forces the help from Middleton and leads to the semi-open three from Crowder.

That’s tremendous defense being trumped by relentless offense, but it’s informative to what the Bucks want to do (hound and drop), where they’re at their best (navigating the perimeter, going east-to-west), and what they’re willing to live with (jumpers vs. paint touches).

The dribble-handoff - the Robinson-Adebayo two-man game in particular - is the heart of the Heat’s half-court offense. Though the Heat went 2-1 in the regular season series, the Bucks effectively shut that action down.

Getting downhill is going to be key against the Bucks. While threes will be available for popping bigs, intermediate shots will be available for the ball-handlers. That isn’t mathematically sound, of course; you want free throws, you want rim attempts and you want threes, in that order. However, you have to take what you can get against elite defenses.

Butler went 3-of-5 on shots between 8-to-16 feet in his lone showing against the Bucks this season. His preference is to get to the rim (and the line), but he can get to his pull-up or floater whenever he likes against the Bucks’ drop coverage.

Dragic struggled at the rim against the Bucks, but he’s shown the ability to snake around high screens and flow into elbow jumpers. The same can be said for Herro, and those probes can help set up the stepback jumper he loves.

The wild card here will be Kendrick Nunn. The starter-turned-9th-man could have a real role as a pull-up threat. The Heat generated roughly 1.09 points per possession on trips featuring a Nunn-led pick-and-roll against the Bucks this season, per the Second Spectrum source. His comfort pulling up could really break things open.

We’ve been scheme-intensive here, but this series will boil down to the Heat making or missing the threes that the Bucks are okay with giving up. As evidenced earlier, the Bucks aren’t going to allow rim attempts if they can help it. They aren’t going to let Robinson shake free on DHOs. There will be a limited window to hit Olynyk on pick-and-pops.

It’s going to be up to the Jae Crowders and Andre Iguodalas of the world to punish the Bucks if they help away from them. Herro will have to shoot much better than his 25 percent clip during their regular-season meetings. Goran Dragic and Nunn, if he plays, will need to bring it as pull-up threats.

Luckily for the Heat, these aren’t ridiculous bets to make.

If the shots go down, it wouldn’t be a shock if the Heat find themselves in the Eastern Conference Finals. At that point, it might be expected.