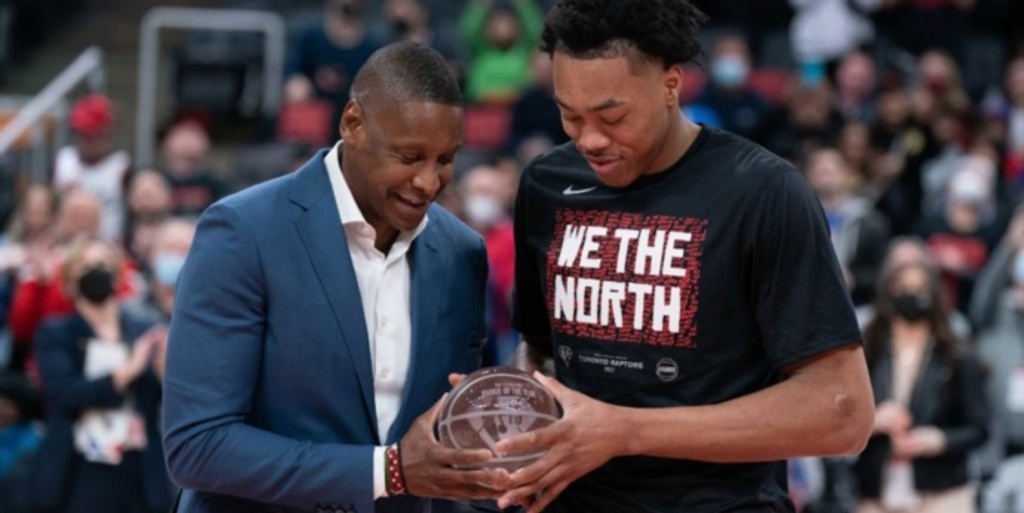 How Masai Ujiri and the Toronto Raptors rebuilt after Kawhi Leonard

Yes, the Toronto Raptors were eliminated by the Philadelphia 76ers last week. They demonstrated potential in their first-round series but didn’t have the chops to take down the 76ers.

While fan bases are generally indifferent about first-round eliminations, Raptors fans should be ecstatic. Not because they should perceive a playoff appearance as a success. That’s nothing to write home about. No, Toronto fans should instead be happy about the quick rebuild from their 2019 championship team, and the underlying foundation they’ve built.

Juxtapose that with Toronto’s situation. As I mentioned above, the Raptors won the 2019 championship in their 24th season in the league. They did so by being ultra-aggressive in adding Kawhi Leonard. While history could view the decision to swap DeMar DeRozan, Jakob Poeltl and a protected 2019 first-round pick for only one year of Leonard negatively, the fact of the matter is that DeRozan and Kyle Lowry led Toronto as far as they could. The only way the Raptors were going to win big was by acting boldly, which is exactly what they did.

But bold moves like adding players on expiring contracts can backfire, as it did for Toronto with Leonard leaving. Leonard was a particularly risky gamble given that his desire to return to Southern California was a badly-kept secret.

As many expected, Leonard signed with the Los Angeles Clippers as an unrestricted free agent in 2019. The Raptors' pursuit (and acquisition) of a championship cost them the ability to compete for the foreseeable future, or at least that’s how it was initially perceived.

Surprisngly, 2019-20 went well for the Raptors. They received contributions from nearly everyone on their roster. The next season didn't go nearly as well, perhaps due to the loss of Marc Gasol and Serge Ibaka (or maybe something else entirely). Whatever the reason, the 2020-21 Raptors finished the season 27-45, good for the sixth-worst record in the league.

But those struggles were short-lived. The 2021-22 season started out well with victories in six of their first nine games. The Raptors miraculously ended this season with a 48-34 record, good for fifth-best in the Eastern Conference.

Thanks for riding with us all year long! We appreciate y’all and can’t wait to see you next season. pic.twitter.com/EzK3bKK05L

Rebuilds are tricky in the NBA. The 76ers underwent a painful rebuild from 2013-2018. The Knicks have arguably been stuck in a rebuild since 2001. So, how did Toronto accomplish it after just one year? Much of the credit is owed to their president of basketball operations, Masai Ujiri.

Ujiri re-signed with the Raptors last Summer after joining Toronto in 2013. Before landing with Canada’s only NBA franchise, Ujiri was the Denver Nuggets’ general manager from 2010 to 2013, where he won executive of the year in 2012-13.

Ujiri’s fingerprints are all over Toronto’s roster. Ujiri’s trade for Leonard was bold, but his moves since Leonard left Toronto are arguably more impressive.

Most notably, Ujiri and the Raptors convinced Fred VanVleet to stay in Toronto on a four-year/$85 million deal in November 2020. And they did so anti-climactically, with no free agent meetings or bidding wars.

VanVleet is a key example of Ujiri’s brilliance. VanVleet was an undrafted rookie, signed by Ujiri and the team to a multi-year contract after a strong showing in the 2016 Summer League. He played well for the Raptors’ G-League affiliate, earning a place on the NBA team’s roster. He’s since become an All-Star.

But Toronto’s success is about way more than just VanVleet. Ujiri also traded Norman Powell to Portland for Gary Trent Jr. and Rodney Hood last season. Powell signed a five-year/$90 million deal with Portland but was traded from the Trail Blazers to the Clippers this season. Conversely, Trent re-signed with the Raptors for a comparative bargain, three-years/$52 million. And Trent had a career year for the Raptors in 2021-22, with career-bests in points, assists and minutes per game.

Ujiri also drafted Scottie Barnes over Jalen Suggs. Barnes was seen as a gamble entering the draft. While some made comparisons to Draymond Green, others doubted his offensive ability, whereas Suggs was widely believed to be the fourth-best player in the draft. Barnes was recently named the 2021-22 Rookie of the Year.

Additionally, the Raptors agreed on a sign-and-trade with the Miami Heat prior to 2021-22, sending Lowry to the Miami in exchange for Precious Achiuwa, Goran Dragic and a traded player exception (TPE). Lowry was an unrestricted free agent, but Miami didn’t have the cap space to sign him outright. So, while this deal fell in Ujiri’s lap, the fact that Toronto received Achiuwa, the 20th pick in the 2020 NBA Draft, as part of it was slightly surprising. Achiuwa was sixth in minutes, seventh in points and third in rebounds for the Raptors this season.

Toronto continues to benefit from other moves made by Ujiri, too, including the drafting of Pascal Siakam and OG Anunoby. Siakam has grown into the team’s best player and leading scorer, and Anunoby has proven himself a wildly versatile wing. Siakam and Anunoby signed extensions with the Raptors in 2019 and 2020, respectively.

Team success is rarely, if ever, the product of one person, especially in basketball. Still, Ujiri has collected great talent and built an impressive culture. He’s also developed and retained players better than most other executives. Credit whomever you’d like, but the Raptors barely skipped a beat after losing a top-three player, and that is something to write home about.