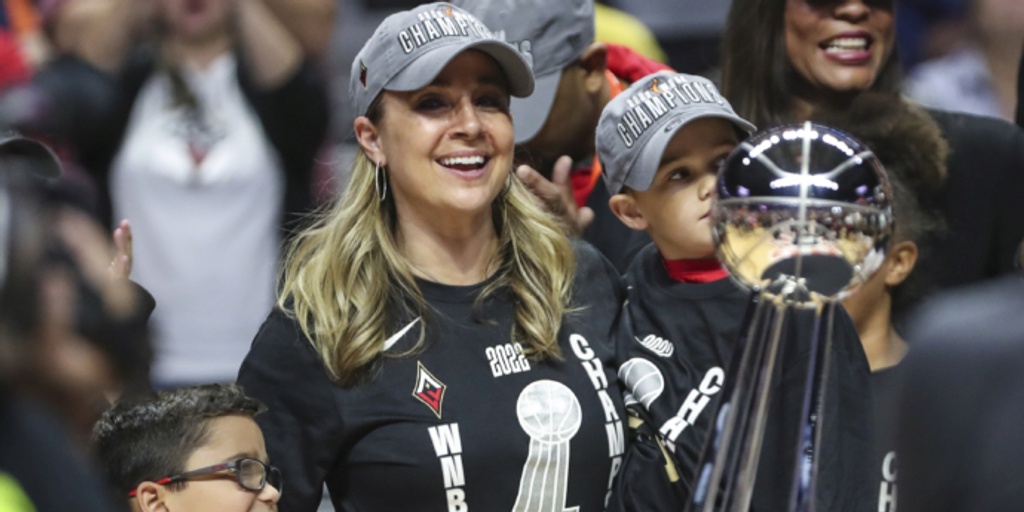 The Las Vegas Aces hold a 60-59 lead coming out of a timeout, and have just put their knockout lineup on the floor. Their small unit — Chelsea Gray, Kelsey Plum, Riquna Williams, Jackie Young and A'ja Wilson — will be tasked with bringing things home.

On the other side, the Connecticut Sun are rolling with their big unit. Courtney Williams, DeWanna Bonner, Alyssa Thomas, Brionna Jones and Jonquel Jones — a group that shrinks the floor for the opposition and bludgeons them in the paint — pose a significant challenge. It's the starkest example of the stylistic clash this series represents.

The Aces have to work on their first possession. Gray brings the ball up the floor while being hounded by Thomas. Plum comes to set a screen for Gray in an effort to pry Thomas away — and put Courtney Williams in the action — but Thomas stays attached. Plum eventually gets the ball and drills a tough pull-up triple over Williams, but the shot comes nearly 20 seconds into the possession.

But that possession is instructive for the Aces. They recognize that the Sun aren't going to allow Gray to beat them. And while they'd love to get Wilson involved as a screener, doing so consistently would invite even more size and length for Gray to have to navigate.

Roughly a minute later, the Aces push after a miss. Gray is once again hounded by Thomas, so the Aces counter with a pair of early drag screens. Wilson sets the first, while Riquna Williams sets the second. Gray is able to get downhill and drag Williams' defender, Jonquel Jones, with her.

A switch is forced as Gray loops around the paint, kicks the ball to Young and receives it back on the left wing. The Sun don't want Jones defending Gray, so Thomas peels over to trap her. Mayhem occurs from there: Gray's pass to the now-open Williams is deflected, but recovered. Young ends up with the ball and pump fakes, then, cans a crucial pull-up jumper.

It's at that moment the Aces know that Riquna Williams is the pressure point that will bring them home. Or, more coldly: They know Jonquel Jones is the player they want to attack in space.

You know the rest of the story by now. The Aces find gold with Williams setting screens and flaring out above the three-point line. She would finish the game with 17 points, 11 of them coming in the fourth quarter and 8 of those coming in the final two minutes.

For all the discussion about the Aces' bench throughout the season, it's at least a little funny that a bench player slammed the door of a closeout Finals game.

The buckets from Williams were loud, but the calculated nature of the Aces' attack is what spoke loudest to me. Sun head coach Curt Miller described the Aces' offensive attack as "NBA-like'' when asked about it ahead of Game 2. He made a similar comparison when asked about the guard-guard screens the Aces ran to close out Game 4.

"The guard-to-guard screens, as they ghosted out of a lot of them, tried to put us in rotation," Miller told Basketball News after the game."

“They were searching. They were trying to get some switches to the matchup advantage they were looking for. That was the chess match. Then, as we went big, they started to put different bigs in that action also. Ultimately, a lot of that pro mentality that leaps into the league from the NBA. We become a copycat league, and that was the action they chose to run late."

Considering the recent background of Aces head coach Becky Hammon — she was hired as a San Antonio Spurs assistant coach under Gregg Popovich in 2014, and held the position until taking the Aces job this year — it makes sense that there were NBA elements to her game plan. When asked about coaches that influenced her style, Hammon referenced some of the top coaches in the NBA.

"I really liked watching Brad Stevens, when he was coaching, obviously. Quin Snyder, [Erik] Spoelstra, Mike Malone. There have been a lot of people that I've watched over the years," Hammon told Basketball News.

"I was in San Antonio for eight years. That's close to 700 games; and that's just our games, not me watching other teams' games for scouting purposes. It's a lot of basketball, so you just see certain things along the way. Some of them are stolen right off the page; other ones, I tweak and put different things in different places."

Look at the coaches referenced from Hammon, and you'll see some fingerprints.

Guard screening, on and off the ball, has been on the rise in the NBA for quite some time. The type of mismatch hunting the Aces utilized down the stretch of Game 4 is commonplace in the NBA, particularly in the playoffs.

You'll have to hone in on the ATOs to see some of the "stolen off the page" examples, like Hammon using the "Winner" set that Stevens' Celtics popularized during the semifinals against the Seattle Storm.

This doozy was also pulled out against the Storm, a nice call-back to a set ran by Golden State Warriors head coach Steve Kerr — another Popovich disciple.

A brilliant ATO drawn up by Becky Hammon gave the Las Vegas Aces a crucial basket against the Seattle Storm last night.

It looked like a familiar play... because Steve Kerr also drew it up for the Golden State Warriors a couple of months ago vs. the Memphis Grizzlies. pic.twitter.com/ibjMZL2pOk

But the broader concepts — the way Hammon uses her stars together to put strain on defenses — really shine through with the examples she used.

The Aces loved to use "Get" action — a pitch to a guard that flows into a handoff and next flows into a ball-screen — as part of their early offensive strategy. That was a Snyder staple in Utah, one used to get Donovan Mitchell (or Mike Conley) downhill against a titled defense.

There were the Plum screens set for Wilson to pry her free. Between traditional cross screens, pindowns inside the arc and random pin-in screens on the perimeter, you can easily draw parallels between those two and the two-man actions we'd see from Jamal Murray and Nikola Jokic under Malone.

I'd wager the Spoelstra influence is felt more on the defensive side of the ball. He's one of the brightest defensive minds in NBA history, with his hallmark being his team's versatility.

The Aces certainly embodied that, eschewing their conservative style from last season to more of a hybrid system. They were aggressive against ball-screens — until they weren't. They deployed drop coverage, until they wanted to switch.

There was zone. So much zone — another Spoelstra hallmark.

While Riquna Williams was bombing away on one end, the Aces went to a zone to close things out on the other end. That often left Gray, Williams and Young battling on the boards against the Sun's massive frontcourt. This possession still rings in my head.

When asked about the process about implementing such a varied style, Hammon said she wanted to keep everyone — her opponents and her team — on their toes.

"When I went back and watched, obviously, a lot of games from the last year, and just me watching the WNBA over the last eight seasons since I've left, really, [it was] just something to mix things up," Hammon told Basketball News.

While the schematic shifts and tactical excellence was easy to see this year, it would all be moot without getting commitment from her players. If there's a through line between Hammon and the coaches she referenced, it's the ability to engage players and get them to buy in.

"I think the bigger thing is the players really bought into it," Hammon told Basketball News about the defense.

"It doesn't matter what scheme you're doing; the players have to believe in it. I think, at the end of the day, they saw enough good results. There were times when Chelsea was calling the defense, junk defense. I'm not even putting us in junk; she's putting us in junk. It's a fun way to play and it keeps the players locked in and alert because we do switch it up quite a bit."

Nakase recently echoed those sentiments, saying Hammon's "ability to get buy-in is probably the fastest I’ve ever seen." That's strong praise for a coach who's spent time working with Lue and Doc Rivers.

It's hard to overstate how good of a job Hammon has done in Year 1. While it would be easy to highlight how foolish some NBA decision-makers should feel for not offering Hammon a head coaching job — they absolutely should feel foolish — it's worth celebrating how she flipped the slight on its head.

"I mean, my journey is not by mistake," Hammon said after Game 4. "Every hard thing that I've gone through has built something in me that I've needed down the road, and even though it sucks in the moment to not to be picked or to get hurt or whatever it might be, the hard stuff builds stuff in you that's necessary for life and you'll use it down the road. It may not feel like it in that moment.

"For me, it's not really about proving other people wrong, it's about proving myself right. If you guys haven't figured out yet, I don't really care."