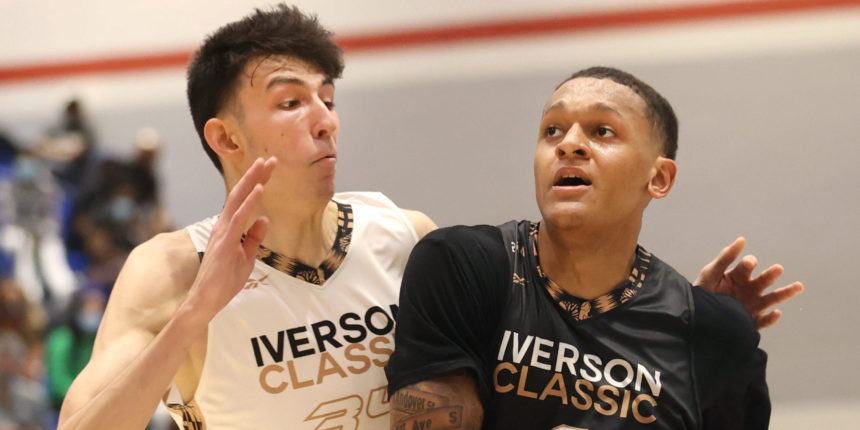 With the majority of High School All-America events cancelled in 2021, the Iverson Classic stood alone as the opportunity for scouts to get eyes on many 2022 NBA Draft prospects. After a weekend of catching up with NBA personnel, friends and getting my eyes on 28 of the best high school players in the country, I left with many takeaways. Here are a few I’d like to share.

Chet Holmgren and Paolo Banchero: The Battle for No. 1

These two are special.

Holmgren’s size and length make him incredibly unique. Standing at 7-foot-1 with a 7-5 wingspan provides him with such an advantage over his peers on both ends of the floor. He’s a smooth ball-handler, has flashes of tremendous playmaking on offense, and on defense, he is one of the best young shot-blockers we’ve seen in years. He stands head and shoulders above his current competition, but as he progresses to the NCAA and NBA level, he will need to improve his physicality, at least in part. In 1-on-1 competition, he was a bear to go up against due to his length, but Trey Alexander (undecided) was able to get into his chest and displace him at times, opening up just enough room to get a shot off. As he continues to develop, I hope to see Holmgren get stronger, but I don’t think it’s a complete make-or-break issue due to his skill set and competitive instincts.

If anyone contends with Holmgren for the top pick next year, Banchero appears to be the one. At 6-foot-10 and listed at 250 pounds, he already possesses the NBA frame and strength to handle the next level. What impressed me the most in Memphis was his mobility on defense, and how comfortable he appeared creating for himself. In both 1-on-1 and in-game competition, he put the ball on the deck with purpose and displayed an array of moves as a pull-up shooter. He’ll need to improve some decision making with the ball, but the versatility makes him a special talent and I won’t be surprised if he has a monster year for the Blue Devils.

Paolo Banchero wins the 1-on-1 competition here @iversonclassic. At 18 years old, he’s 6’10, 230 pounds and has shown unique playmaking and special touch for his size. He’ll certainly contend for the #1 pick in 2022. pic.twitter.com/U1WxsmlSFY

After seeing him in Dayton, Ohio at Flyin’ To The Hoop, I have been enamored with TyTy as a prospect. After announcing his committment to Kentucky last night, Big Blue Nation is getting a natural floor general who processes the floor quickly, and often seems one step ahead of his opponents. He’s a skilled passer on the move and is unselfish, providing his teammates with scoring opportunities. Along with this, he has great mechanics and a repeatable, effortless shot from three, which he uses both off the catch and dribble. He won the Three-Point Contest in Memphis, and I believe he can carry that scoring to the next level.

As I arrived at the gym, Griffin stood out immediately based on his frame and physical profile. At 6-foot-7, he has a reported 7-2 wingspan and a powerful lower body, giving him great versatility, as he is able to score on all levels. I’m concerned initially with his lack of versatility as an initiator, but he’s a solid shooter and projects to be a strong defender at Duke next season. While there were times his legs looked a bit heavy due to returning from injury, he jumped well in the Dunk Contest and came away with the crown. Griffin is a special talent that's still only 17 years old, and I would expect him to be a one-and-done and a player to enter the 2022 draft.

It’s no secret that Davison is one of the most athletic, explosive players in the country. With his leaping ability and craftiness, he’s able to finish plays at the rim in a variety of ways, but he has been improving as a passer as well. In transition, he has the vision and ability to lead his teammates to the basket, but remains aggressive for his own buckets when pushing the pace. Whether or not he’s a one-and-done player is yet to be seen, but he has the physical tools to be a tremendous playmaker, rebounder and defender at high levels.

Foster is a big-time physical presence. He stood out as the player who dominated the glass during the event, doing so with a great combination of strength and motor. On the offensive end, he was able to elude box outs and use his frame to clear out space as he elevated for putback dunks; he ended up with 17 points. I expect his physicality to hold up well at the next level, but would love for him to become a bit more versatile on the offensive end. With some improved skill and ball-handling improvements during his time in the G League, Foster could see his 2022 stock rise.

Keels is committed to Duke, but there doesn’t seem to be a ton of hype around him across the media. It makes sense because he isn’t wildly athletic and doesn’t regularly provide high soaring dunks, but he made a real impression on me with his play. Quietly one of the best scorers I saw, Keels plays with tremendous basketball IQ and has the ability to score at all levels. His shooting from deep is what drew me in, displaying good footwork and a smooth, balanced release. Keels is also disciplined on both ends, and has a strong physical frame, allowing him to be a plus-defender both on and off the ball.

I had not seen Minott live this season, but while watching him score 18 points and gather 5 rebounds, it became apparent why he is a top-50 recruit. He’s 6-foot-8 with a 7-2 wingspan, and has easy athleticism that allows him to play above the rim. He elevates well in traffic and displays strong body control with some crafty finishes, as well. Minott has the potential to provide real versatility for the Tigers next season, both on the wing and with some ball-handling responsibility. I don’t expect him to be a one-and-done prospect, but he is certainly one watch for the NBA down the road.

After a terrific showing at Geico Nationals, Brown looked good again in Memphis. Brown is an athletic swingman who excels as a slasher. He’s bouncy on the interior, and pairs his athleticism with strong body control to finish tough plays. I really liked his defense as well, as he has good mobility and length, allowing him to defend the perimeter at a high level. I see Brown as a potential one-and-done player at the next level, so it will be interesting to watch how his offensive game and skill set develop this season in Waco.

Huntely-Hatfield recently reclassified to the Class of 2021 and will be taking his talents to Knoxville. Another young player that was immediately captivating with his size and strength, his defense is what really captured my attention. He is a bit mechanical in his movement, but when locked in and focused, his strength and ability to contest shots were impressive. On offense, he remains a bit raw, and the shooting mechanics are funky -- but I think there is promise as an interior scorer. Potentially a multi-year player for the Volunteers, I look forward to seeing him again next season.