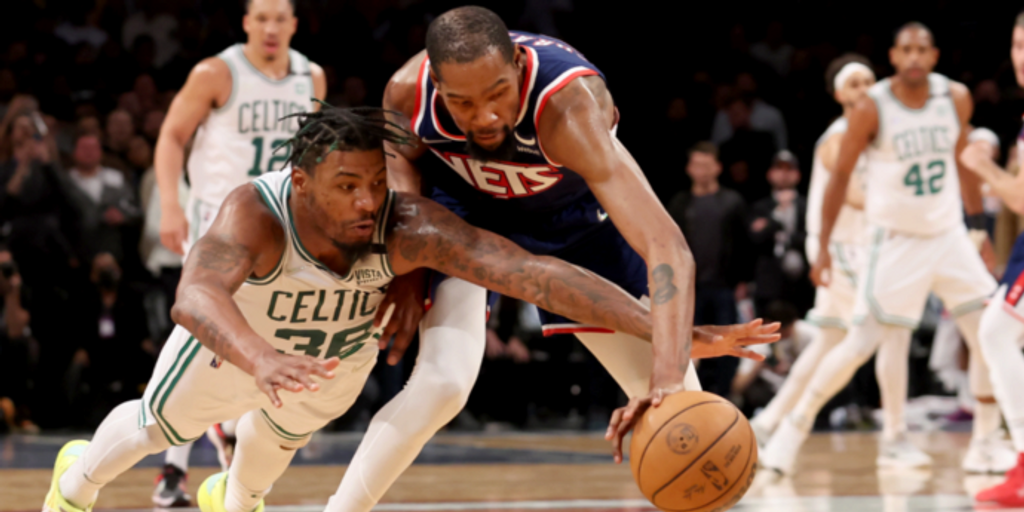 It’s impossible to watch the NBA Playoffs and not be impressed with the talent level of the league’s stars.

Chris Paul and Steph Curry have been doing it for a minute, but in recent years, we’ve gotten to see some newer faces on the playoff stage show that they’re not afraid of the big moments... Guys like Devin Booker, Jayson Tatum, Ja Morant and now, even Anthony Edwards.

But the more I watch those guys, the more I have to respect the guys whose job it is to stop them. It might be cliché, but defense really does win championships. At this point, there’s only eight teams left in the playoffs, and it’s no coincidence that guys like Matisse Thybulle, Draymond Green, Mikal Bridges and Bam Adebayo are still alive.

There can only be one Defensive Player of the Year, though, and this year, he happens to play in Boston.

Marcus Smart sure is deserving.

I obviously have a little bit of a soft spot for the Celtics, but over the years, as I’ve watched Marcus, I always felt like he was exactly the kind of player I would want on my team. He has skills on both sides of the ball, but defensively, he’s not willing to give even one inch to his opponent, and that’s exactly why he’s become such a favorite in Boston.

The very first conversation I had with Gary Payton once we became teammates in Miami, GP complimented me because, according to him, I wasn’t afraid to get up in another dude’s face. To be honest, I was a little surprised that he even knew who I was, but he always told me that real recognize real, and today, that comment has newfound meaning to me.

When I look back at my career, I give thanks for all that I was able to accomplish and for the fact that I was able to win at the highest level. It’s hard for me to look back on it and say I have any regrets, but I can’t lie... As someone who was regarded as a great 3-and D guy, it would have been nice to win the Defensive Player of the Year Award. If you’re someone who takes pride in your ability to lock other guys up, that’s sort of the pinnacle of the profession.

Even though we were only together in Miami for a short time, I learned a lot about defensive principles and technique from GP, and we took a special pride in defending our opponents and making things difficult for them.

So for me, it all comes full circle in a way; Marcus became the first guard since GP to win the Defensive Player of the Year Award.

GP was named Defensive Player of the Year during the 1995-96 season. Since then, of the next 25 seasons the award was given out, it went to a center 19 times. The other six times, the award was won equally by small forwards and power forwards.

The fact that almost 30 years went by before a backcourt player won the award again is crazy. If anything, the award should go to guards more often than anyone else.

What we have seen over history is that, for the most part, centers get the credit for anchoring a team’s defense. And in most cases, they do deserve the credit, because being the last line of defense is a huge responsibility. But centers usually have a size advantage and play closer to the rim. In many instances, their primary responsibilities are to block or change shots, and rebound, but they usually have more of an opportunity to make plays on the ball and attract attention since they usually play at the rim.

Having a good anchor is obviously an important part of any championship-level defense, but not even guys like Rudy Gobert or Dikembe Mutombo can patch every hole in bad defense.

When you have a five-man unit on the floor, they are really only as strong as the weakest link, and if the backcourt can’t defend, the team is toast.

Think about it. In most cases, unless you’re playing a triangle offense or something like that, an offensive attack begins with a point guard. If he’s easily able to beat his man off the dribble, it compromises the entire defense. When it comes to playing straight up, man-to-man defense, guards have to be top notch in order to not be a liability for their team.

Today, the game is so spaced out; it’s definitely become more difficult for centers, but perimeter players have to guard pick-and-rolls, chase over screens, keep assignments in front, contain the dribble in front of them and just overall have more of a responsibility.

In the league today, things are that much tougher because pretty much every team plays pick-and-roll basketball. So again, the perimeter defenders not only have to play good on-ball defense, but they also have to know when to switch and know how to read coverages in certain situations. They have to close-out on shooters, recover and know their rotations. The job was hard when GP was doing it back in the 1990s, and it’s only gotten more difficult in recent years.

To be honest, it feels a little weird arguing this point, because Draymond Green and OG Anunoby are two of my favorite guys to watch on the defensive end. I respect the hell out of Gobert and Adebayo, and I think that Dennis Rodman and Scottie Pippen are some of the best defenders ever. None of those guys are backcourt players. What they do have in common, though, is their versatility. And that’s what made Marcus Smart deserving of winning the award this year.

Maybe the solution is for the league to separate the Defensive Players of the Year, and to give out the award to the best backcourt defender and the best frontcourt defender. That would probably take a little of the prestige away from the honor, but the truth of the matter is that bigs and guards have very different responsibilities to a team’s defense — it’s just really hard to compare those contributions directly.

But this year, at least, it’s nice to see that Marcus ended the drought. It’s been a long time coming. It’s not every day that you find a guard who not only accepts every challenge that comes his way, but also exceling at it. Smart can effectively guard all five positions, which is not something you see every day.

With the Bucks standing between them and a chance to get to the conference finals, Boston has its work cut out for it in the Eastern semis. Giannis and the Bucks are trying to go back-to-back.

But one thing for sure, is that Boston is going to fight, and I know that Marcus Smart is going to be battling every possession he’s out there. And even if he’s not 100%, his fingerprints are going to be all over the game.

He deserves more than just credit for that. He deserves to be the Defensive Player of the Year, and honestly, it’s long overdue.