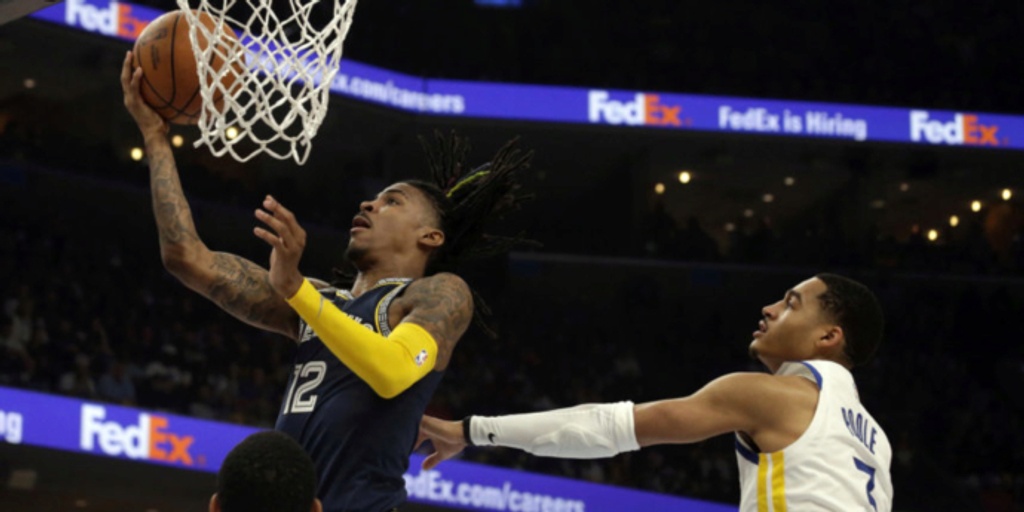 How the Grizzlies flipped the script on the Warriors

Ja Morant had one of those nights. His 47 points, 8 rebounds and 8 assists led the way for a young Grizzlies team fighting to avoid a 2-0 series deficit versus the Golden State Warriors in the second round. He was, in a word, invincible out there on Tuesday evening.

That said, it'd be a disservice not to mention that Golden State lost its best Morant defender, Gary Payton II, due to an elbow injury within the first three minutes of the game. That's more than just a small footnote; 'GPII' is one of the best point-of-attack defenders in the sport, a helacious screen sniffer-outer with the speed and physicality to stay epoxied to players of Morant's ilk as they bob and weave into the paint. There was a reason Payton II was promoted to Steve Kerr's starting lineup for each of the first two games. His job was to defend Morant at all costs.

Payton's injury left Golden State high and dry without any reliable options for the superstar Grizzly guard. Golden State's primary scheme versus pick-and-rolls is to simply switch assignments, so Morant went deep into his bag by targetting weaker Warrior options on PnR switches for a steady diet of downhill isolations.

Jordan Poole got the worst of it, diced up like a smoothie in a Ninja blender in a highlight that made rounds on social media almost instantaneously. Poole just doesn't have the experience nor the diligence to stick with Morant's wide array of moves—the fake-spins, the earth-shaking crossovers and through-the-legs dribbles—and was regularly left stumbling on his heels. Per NBA matchup stats, Morant went 3-for-5 when guarded by Poole, and the most shocking part about this stat is that he actually missed twice.

Andrew Wiggins was Morant's primary defender, and while he did fare better than Poole by holding Morant to 33.3% shooting, Morant scored what ended up being the game-sealing floater by driving full force and then tapping his brakes to decelerate and get to his preferred right hand. Speed and change of pace appear to be Morant's most notable attributes when guarded by Wiggins. He basically Thanos-snapped the All-Star wing into dust with a helacious drive to close the third quarter.

Golden State also gave Klay Thompson some reps against Morant, which, um... didn't go well. Morant shot a perfect 4-for-4 when guarded by Thompson, who very much looked like a player attempting to reclaim his former two-way greatness while coming off a two-year injury absence. It's probably too early to say Thompson has lost a step after ACL and Achillies tears in back-to-back seasons, but Tuesday night didn't necessarily help dispel that notion. Meanwhile, his backcourt buddy Steph Curry might be Golden State's best option going forward with Payton II on the mend. Not only did Curry record the game-sealing block against Morant in Game 1, he also held him to just 1-of-4 shooting in Game 2. Even on Morant's solo bucket, Curry does a nice job sending Morant to his weaker left hand before cutting off the driving lane. Ja just hits a ridiculous bank-shot through contact.

Looking ahead, what are Golden State's options when attempting to contain this Tazmanian Devil of a power-guard? For one, disallowing Morant from attacking ill-suited defenders in isolation is certainly an idea worth exploring. Trapping pick-and-rolls by sending two defenders Morant's way just to get the ball out of his hands and forcing his teammates to finish possessions would also make sense. Per The Ringer's Kevin O'Connor, the Warriors trapped just one Grizzlies pick-and-roll, which eventually resulted in a three-pointer from a sub-32% shooter, Ziaire Williams.

Here's the problem: Late in the fourth quarter, Memphis may have already stumbled upon a possible counter should Golden State start blitzing pick-and-rolls.

Below, the Grizzlies run pick-and-roll by having Williams initially approach the left side of Wiggins' body to generate a drive going right for Ja Morant. Knowing this, Jordan Poole jumps in front of Williams to be in position to either switch or hedge the ball screen.

But it's all a ruse. At the last second, Williams flips his ball-screen to the right side of Wiggins' body, and because Poole was so eager to thwart Morant's preferred right-handed drive, he's now positioned poorly. Morant gladly takes the free lane to the basket down the left side of the floor for a gorgeous hanging layup.

This wasn't the first time that Memphis preyed on Poole's inability to mask his intentions when guarding the pick-and-roll. Just one minute later, the Grizz went to the same action—this time with De'Anthony Melton faking and flipping his screen—and Poole is once again woefully out of position when he jumps out to contain the right-handed drive.

These same principles of flipping ball screens could be applied if and when Golden State starts trapping pick-and-rolls. Imagine if, in each of the two clips above, Poole had taken a few steps higher to blitz the ball-screen from the right side of the floor. Williams would still have had a small window to set a screen on Wiggins' hip to send Morant left for the drive. It's worth mentioning that Morant is in that rarified class of athletes with a monstrous first step to beat traps with regularity.

Flat screens could also be something the Grizzlies could tinker with in lieu of the threat of a blitzing defense. Flat pick-and-rolls are when the screener sets the pick with his back completely parallel to the baseline. Because he isn't setting the screen on either side of the ball-handler defender's body, it makes it tough for the defense to tell which direction the ball-handler intends to go. It'd be at Morant's discretion to go left or right depending on which way the trapping defense was leaning.

(A brief tangent: Memphis could also experiment with snug pick-and-rolls should Golden State sag deep into the paint and dare Morant to shoot, a la Russell Westbrook. Snug pick-and-rolls, or PnRs closer to the basket, were how the Miami Heat countered the Los Angeles Lakers' paint-packed defense versus Jimmy Butler in the 2020 Finals. Setting screens closer to the rim puts the defense in a perilious situation with less time to recover, and all an explosive guard like Ja Morant needs is a slight advantage to take a few leaps and bounds to the rim to bust out his breathtaking athleticism.)

In Game 2, 21 of Ja Morant's 47 points came off drives, with most of those downhill attacks in isolation against grusomely underprepared Golden State defenders. It'll be interesting to see how Golden State responds. If the Dubs do indeed go the trapping route, Memphis already has displayed a few counters of their own with even more in their back-pocket. But ultimately, it all comes down to just how special of a driver Ja Morant is. He's fully equipt to beat aggressive schemes with pure athleticism. It turns out things get a lot easier when you boast the best downhill player of the last half-decade.