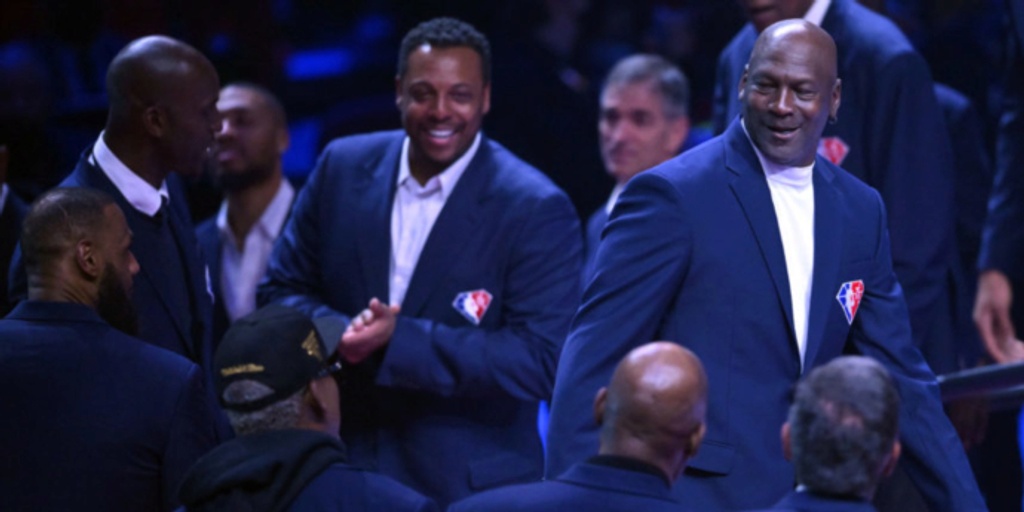 I’ve had the privilege of being around some great players, including some guys from the NBA’s 75th anniversary team.

In Boston, I was teammates with Kevin Garnett, Paul Pierce and Ray Allen. In Miami, I had Shaquille O’Neal and Dwyane Wade showing me how to become a champion. I played with Chris Paul in New Orleans, coached LeBron James and Kyrie Irving in Cleveland, and was fortunate to have other guys like Antonio McDyess, Nick Van Exel and Steve Francis show me what success at the NBA level looked like.

I’ve been around the game for a long time and, even though the game has changed, one of the constants has been players of the older generation telling the younger players they couldn’t cut it “back in the day.”

Charles Oakley became the latest to make those kinds of comments earlier this week when Oak said that Giannis Antetokounmpo wouldn’t even be a starter if he played back in the 1980s or 1990s.

There’s always going to be people on either side of the argument, but one thing we can all agree on is the fact that the game is way different now than it was 30 years ago.

On a personal level, I feel like I’m kind of caught between the two generations. I grew up watching Scottie Pippen and people compared me to him. I was drafted in 1999, but I was shown the ropes by guys like McDyess and Nick the Quick, who more so came up in those times. At the same time, I played 12 years and I think I saw that transition happen right before my eyes. Things just slowly evolved.

Truth be told, I think there’s a lack of respect on both parts.

Older players like Oakley look at younger players and, for the most part, don’t really think they’re tough. Today, the league is more about protecting offensive players, protecting shooters and encouraging high-scoring games than it was back in the 1990s. Go back and watch some tape and you’ll see. If Michael Jordan played by today’s rules, for example, he could probably average 50.

Meanwhile, if Steph Curry went back to the 1980s and had to play against Isiah Thomas and the Detroit Bad Boys, and if he was seeing that kind of competition every night, if he wasn’t encouraged to shoot 15 three-pointers every game… Would he have become the same player?

Maybe he still would have. I’m just saying, that’s where the arguments come from. Older players just think that the league has become soft, and they don’t respect how players exaggerate contact and go out of their way to draw fouls the way it’s become so common in today’s game.

On the other hand, one of the things I’ve heard a lot from younger players and people who think guys like Giannis and Steph could go back and dominate is the “lack of skill” that some of the older players had, and I don’t think that’s true at all.

In recent times, we began to equate a guys’ skill with his flash. Guys like Dr. J, George Gervin and Dominique Wilkins got accolades and attention, partially because of the things they could do, but so many other guys — guys like Charles Oakley — simply played the game in a no-nonsense type of way.

Guys like Oakley focused on fundamentals and on being able to perform their jobs well on the court, and I think the current generation of players and fans — when they look back at those guys — try to act like they weren’t “good” because they weren’t doing flashy dunks or crossing people over.

I grew up being taught to respect my elders, and I think we should remember to do that.

At the same time, the older generation needs to understand that the game has changed and is just played differently. There’s no reason to think that someone like Steph wouldn’t have been able to get buckets against someone like Isiah or Derek Harper or whoever. He would’ve had to adjust and find ways to be effective, just like he did in his earlier days when he was squaring off against other tough defenders.

The whole thing actually got me thinking: if I had a time machine and could make an imaginary pickup game with today’s players against players from the 1980s and 1990s, which matchups would I like to see?

Ultimately, I think the winning team would be decided by which set of rules the imaginary pickup game was played under. If you were playing with today’s rules, Isiah would probably get called for three hand-checking fouls on Steph in the first five minutes of the game.

If we were playing in the 1990s, though, Anthony Davis would probably get caught with an elbow from Karl Malone and need some time to recover. Worse for AD? There probably wouldn’t even be a foul called on the play.

If I could have it my way, I’d take one player from each position and two wildcards.

At point guard, as I’ve already hinted at, I’d like to see Chris Paul vs. Isiah. Both are all-time great point guards and both guys are tough competitors.

At shooting guard, I’d take Reggie Miller and James Harden. Two of the greatest shooters ever, and also two of the best actors, haha. I’d be interested in seeing how well Reggie would be able to keep up with and stay in front of James and also whether James could be effective without necessarily getting a bunch of free throws.

I’d obviously have to put MJ and LeBron in there. Even though MJ is a shooting guard, I’d have to cross-match them. It’d be great to see whether MJ could score on LeBron at will the way he pretty much did against everyone else.

Karl Malone and Anthony Davis is an interesting one. Malone was as tough as they come, and AD doesn’t really have that type of reputation. That said, AD is a superior offensive player and one who can score from almost anywhere. I’d definitely want to see how The Brow managed to hold his own against The Mailman.

At center, I’d take Shaq and Joel Embiid to go at it. Embiid reminds me of Shaq a little just because he’s so dominant, but so agile. Because Shaq was so strong, people really don’t give him the credit he deserves for being a great defender (when he tried) and for being able to move without the ball and see his teammates.

For my two wildcards, so to speak, I’d want to cross-match Kevin Durant and Larry Bird and Steph Curry and Mahmoud Abdul-Rauf. Durant and Curry are probably the superior talents, but Bird never saw a challenge he couldn’t meet. He also never saw a player quite like KD, though, so it’d be interesting. Curry would obviously have to be in this matchup, and the reason I’d pick Abdul-Rauf is mainly because I think he’s someone who isn’t talked about enough. He definitely wasn’t on the level of Steph, but he was a great scorer and someone who could control a game. And even if Steph was lighting him up, he wouldn’t be asking for any double-team. If Abdul-Rauf played in this generation, I think his entire career would have been different.

So that would be my ultimate pickup game:

Just writing out those names for the new-school team makes me wonder how on earth the old-school team would be able to stop them from scoring… But I think Isiah, MJ, Malone and Shaq would band together to find a way… Or at least go down swinging. Probably literally, too.

The game has definitely changed. Some people may like the changes, some may not. Either way, one thing is for sure: no matter what era you’re from, it’s not easy to succeed in the NBA. We all deserve each other’s respect, and whether or not you agree with Oak and his assessment of Giannis, we can’t take away the fact that the Greek Freak is the reigning Finals MVP.

Whether in 1980 or 2021, that trophy has always carried the same weight. That’s something I’d challenge my old-schoolers to always keep in mind.