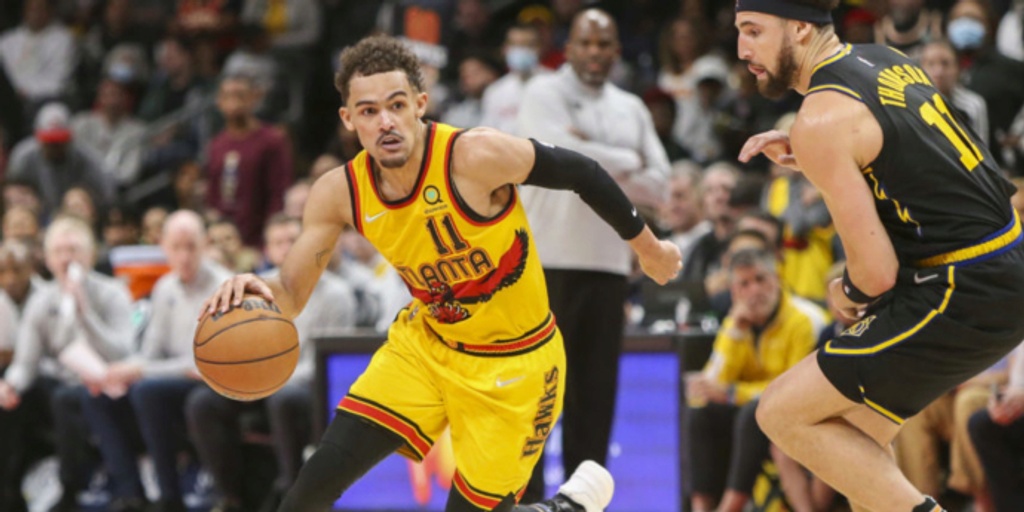 Explain one play: It takes two with Trae Young

Trae Young is in the midst of a historic season.

It's flown under the radar due to the other powerhouses (and storylines) in the conference, as well as the underwhelming nature of the Atlanta Hawks' season. And to be fair, Young's less-frequent-but-still-problematic apathy on defense has contributed to the Hawks' issues this year.

But as of this writing, Young leads the NBA in total points (1915) and assists (649). If it holds, he'll become the first player since Nate "Tiny" Archibald in 1972-73 to lead the league in both categories.

The bedrock of Young's success is the pick-and-roll. Nobody in the league blends volume and efficiency quite like he does. Consider these tidbits, courtesy of Second Spectrum tracking:

You can keep going down the rabbit hole and find fun stuff, like him being the only player to receive 10,000 picks over the past three seasons, but you get the gist. He's the system — more importantly, he's good enough to be the system.

There isn't a great answer for Young. Play drop against him, and he's able to pull-up from deep (36% on pull-up 3s out of ball screens, per InStat tracking) or get downhill for floaters, lobs, or kick-outs. Switch against him, and he'll boogie against less talented defenders.

Your best bet may be to force the ball out of his hands, but that can pose its own issues. One, Young is shifty enough to flat-out split your trap and put the rest of your defense in a bind. On a more basic level, sending two players to Young means tasking your defense to defend four players with three. It's not an easy thing to do for long stretches of time.

The Warriors found that out the hard way on the opening possession of Friday night's game.

Opening sets are always fun. Tone-setters, if you will.

The set kicks off with Danilo Gallinari setting a decoy ghost screen for Young. He then receives a pass before flowing into a handoff with Kevin Huerter. As Huerter receives the handoff, Clint Capela lifts higher on the floor. The Hawks are getting ready to set up a variation of Blind Pig action — Young sprinting into an exchange. The beauty of Blind Pig action is the suddenness of it. If done correctly, the ball handler's defender gets demolished by the pick, thus creating a 2-on-1 advantage.

The Warriors have their two best defenders (Andrew Wiggins, Draymond Green) involved in the action, and they attempt to counter this action by blitzing Young. But if you have two to the ball, somebody has to zone up behind it. Due to the spacing on the possession, that responsibility falls to Klay Thompson. 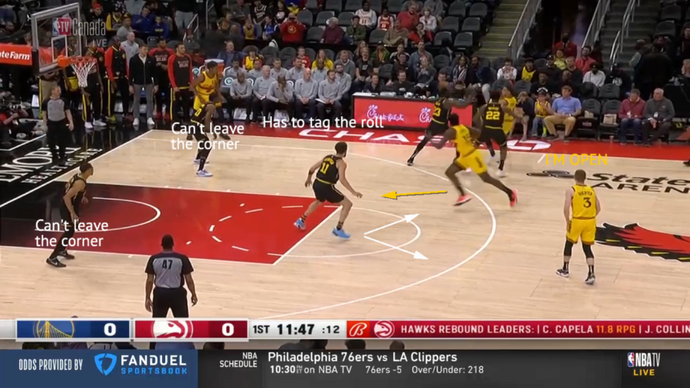 Young doesn't panic when the pressure arrives, and simply flips the ball ahead to De'Andre Hunter in the strong side corner. With Thompson dropping down to cut off Capela's roll, and Jordan Poole accounting for Gallinari in the weakside corner, Huerter is left wide-the-heck open. 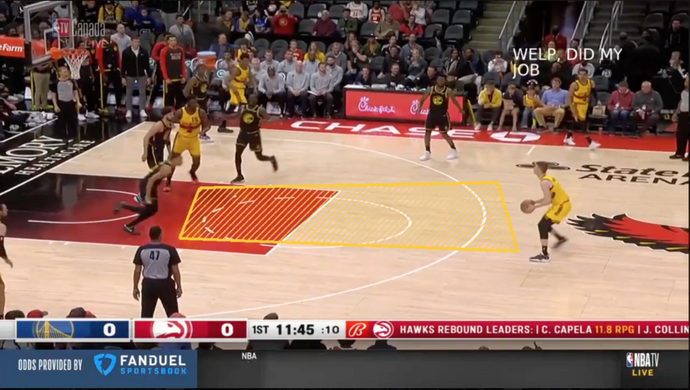 The "Blitz Young" strategy is one we've seen work on occasion, most recently (and egregiously) against the Charlotte Hornets last Wednesday (March 16). But it's an occasional remedy for a reason. Letting an NBA team play 4-on-3, 3-on-2, or 2-on-1 consistently is still a risky bet.